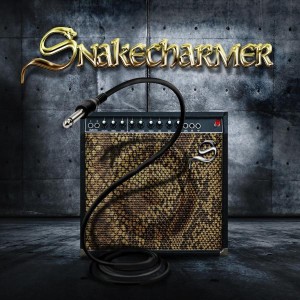 Although he has lent his musical prowess to many rock bands since the 70s, guitarist Micky Moody will always be most strongly associated with the early Whitesnake.  Since parting ways with David Coverdale and company in the early 80s, his association with that band is one he’s always been keen to flaunt, with his later bands trading off the word snake wherever possible [see The Snakes with powerhouse vocalist Jorn Lande and Company of Snakes with members of Swedish Whitesnake obsessives Snakes In Paradise].  Snakecharmer –Moody’s principal vehicle for 2013 –  sounds almost exactly how you expect, many of its eleven numbers sounding very influenced by Moody’s early 80s associations, something bolstered farther by the presence of former Whitesnake bassist Neil Murray.

In fact, Snakecharmer essentially marks the studio debut of the previous Moody/Murray live project Monsters of British Rock, re-enlisting three more of that band’s members.  Joining Moody and Murray are other famous faces – sometime Thunder drummer Harry James and ex-Wishbone Ash guitarist Laurie Wisefield.  That would be an impressive retro-rock line-up by most standards, but perhaps the icing on the cake with this outfit is the inclusion of Chris Ouseyon lead vocals.  Having lent his great voice to works by Virginia Wolf and Heartland, as well as an excellent solo debut in 2011, Ousey’s emotive and naturalistic delivery is a great match for the old-school, melodic yet tough musical chops practised by Snakecharmer.  Fleshing out the band on this debut release is keyboard player Adam “Son of Rick” Wakeman (also of Headspace) – the newest addition to the all-star line-up.

With no messing, ‘My Angel’ starts things off with an incredible slab of old-school rock, capturing each of the musicians in fine form.  The guitars lay down a riff which recalls early Whitesnake’s toughest edge, blending it with a groove that may have suited the latter-day ‘In Through The Out Door’ Zeppelin.  Harry James doesn’t quite bring the punch of Bonham or, indeed, the younger Ian Paice, but his backbeat is hefty enough, which with Murray’s beefy bass provides a rhythm section most classic rock bands would kill for.  ‘Nothing To Lose’ is even more groove-led, its chorus driven bluesy swagger clearly influenced by Moody and Murray’s formative years.  While not always a match for the late 70s David Coverdale, Chris Ousey takes the vocal and completely nails it, reigning in the higher registers of his voice and allowing the more soulful elements to take the lead.  If, somehow, you’ve missed his work with Heartland over the years, these four minutes should be enough to demonstrate why melodic rock buffs rate him as one of the UK’s finest singers.  Moving away from the tune’s solid foundations and enjoyable chorus, there are some even more enjoyable moments to be heard as Moody and Wisefield trade off lead guitar parts.  In short, this is classic bluesy rock the way you’ve always loved it.

Among the other stand-out tracks, ‘Stand Up’ brings more of a Heartland influence to Snakecharmer’s sound, and rather understandably, Ousey sounds more confident here than ever.  A strong chorus combining a killer hook and stabbing keys is the epitome of classic AOR, while the lead guitars attempt to bring a slightly stronger air of bluesy hard rock with their soaring notes, but ultimately it’s Ousey’s melodic rock background which carries the piece.  With each band member bringing something great to the mix (check out some of James’s drum fills during the closing moments), this ranks as one of the album’s unmissable tunes…and it’s up against stiff competition.  Bringing Murray’s huge bass sound to the fore, ‘Accident Prone’ is an enjoyable rock stomper, where the whole band weigh in with some hefty sounds.  While Murray unquestionably carries the number, Wakeman’s Hammond organ adds a strong musical colour throughout.  Since this is a tune firmly focused on rhythm and punch as opposed to any kind of flashiness, it’s not until the lead break the guitarists do anything of any huge interest. Upon arrival. their short solo includes some rather fine twin lead work, which while not necessary up there with Brian Robertson and Scott Gorham at their peak, is certainly sharp enough to make an indelible impression.

More excellent twin leads kick off ‘Cover Me In You’, a hip-swaggering blues-edged workout which could rival ‘Ready An’ Willing’ era Whitesnake at their best.  Against the solid foundations, Ousey really pushes all aspects of his vocal range – but being a true pro, he never resorts to squealing unnecessarily or forcing any part of his delivery.  The slower, near epic ‘Fallen Leaves’ brings each of Snakecharmer’s best elements together into a single number, as Moody and Wisefield indulge in emotive solos – bluesy and gentle at first, building to an inevitable climax, while the rhythm section sound like a force of nature throughout.  Ousey, meanwhile, tackles the vocal line in his usual soul-inspired style, allowing the edges of his voice to fill spaces with a huge presence, but unlike a few of his peers [chiefly Toby Hitchcock, but occasionally Glenn Hughes too] never becomes overbearing.

While some may knock Moody and Murray for trading off the ’Snake name yet again, Chris Ousey’s presence is enough to ensure that Snakecharmer are a great band in their own right. The songs may not bring anything new to the genre, but this supergroup – for the want of a word – are the business.  Eleven songs, no duds, Ousey and Moody in top form – this is a band whose work ticks all the right boxes for the classic rock fan.  Get this album when you can, you won’t regret it.