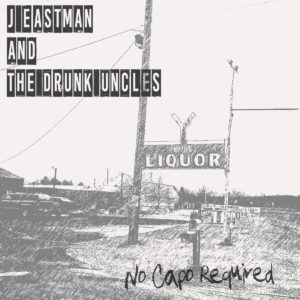 ‘Not The Liquor’ starts their 2016 release with something that sounds like a rough and ready version of the early Gin Blossoms, or perhaps a slightly more country rock derived answer to the Boston swagger of Tom Baker and The Snakes. Across a jagged verse, there are various nods to the basic melody from the Blossom’s ‘Cheatin’, while bridge sections push forward the lead guitar. Chorus wise, everything has a definite shift towards the Snakes and their bar room rock. Musically, there’s a lot to like and providing you don’t mind a gruff vocal that often sounds like someone from an Uncle Tupelo covers band, that’s very much a plus point. There’s not as much focus on a chorus as you’d expect, but with a cheeky lyrical nod to Bob Dylan somewhere en route and a familiar core sound, it manages to win through. ‘Phone Sex’ opts for a similar country rock roots but emphasises more of an acoustic edge which works quite well when Chad Dillerud pushes forth some tasteful electric lead. It’s a little more restrained vocally, too, this time showing flourishes of something that could just about fit with some of the material on Brian Fallon’s ‘Painkillers’ album. It mightn’t seem as direct as the opener – at least on those all important early listens – but beneath the relatively simplistic roots rock, there are some nice musical touches.

The band’s favourite subject, the ol’ boozeroony, rears its head defiantly once more on ‘Drink To Myself’, an unflinching voyage into the perils of drinking alone. A potentially bleak tale is given a necessary spiky lift via another punchy arrangement. Rootsy guitars with a chopping edge occasionally lean towards a deep cut or two from the mighty Creedence Clearwater Revival – without loosing to much of the Uncles’ garage rock roots – and the general vibe is good; the main riff motors along in a jaunty manner, while the rhythm section sound good and firm. At this point, Jesse Eastman has found the best – and arguably most sympathetic – vehicle for his ragged vocal style and it’s hard, once again, not to draw an obvious and direct parallel with Jay Farrar back in his Uncle Tupelo days. Granted, the lyric mightn’t come from such a narrative based place as some of Farrar’s best works, but the bones of a decent track are very much here.

Into the second half of the disc, ‘Rock ‘n’ Roll Star’ drops the quality, instead opting for humorous filler. Shamelessly aping a post-grunge riff, complete with ‘Smells Like Teen Spirit’ verse pacing and an occasionally familiar guitar flourish, it’s quickly obvious where this is headed. It’s not completely out of step with the tunes that have gone before, though, as a ringing guitar also harks back to the Minneapolis-ish sounds of the other material. Musically, it’s pretty easy with its gentle fun-poking attitude, but the lyrics are amusing. Among the various things in line for mockery include giving photographers the middle finger to create an impression, drunkenness at award shows and, eventually, becoming an old and grey has-been. It’s all worth it, though, as after all is said and done, rock ‘n’ roll stars get to buy houses that are “really, really, really, really, really, really big”. As always, though, amusing things don’t stay amusing indefinitely. A more alt-rock vibe informs ‘John Tesh’, too, as the band embraces a sound that echoes the much overlooked 90s Canadian band Age of Electric. The alt-country bits and pieces, as well as the echoes of a Minneapolis past are all but completely abandoned and in their place, a tough but melodic riff suitable for jostling and pogoing. It doesn’t sound like a band muscling in though… With Jesse’s distinct vocal roughness and Scott Skaja’s tough drumming style, it’s a natural fit with the Uncle’s usual style, while ‘Lack of Medication’ brings more Mineapppolis rock and alt-country without any new slants or quirks and it’s Wilco-meets-Gin Blossoms mood would almost certainly make it the stand-out, were it not for ‘Josephine’…

A great example of how good the Drunk Uncles can be when fully focused and not imbibed, ‘Josephine’ works the twin guitars into a country rock frenzy; their semi-picked style creates a real feeling of pace and for a sometimes sloppy band, they’re impeccably played. Throwing a slightly growly, rootsy voice into the mix, this quickly becomes the ultimate Uncle Tupelo homage. There’s not even any attempt to redress it in the Drunk Uncles’ own style – it’s played absolutely straight…and it’s great. …And it’s obvious they know it too.

Sloppiness and all, if you’ve got a passing fancy for Tom Baker and The Snakes, rough Jay Farrar demos and perhaps even the harder edged bits and pieces from The Naked Sun, there could be something for you here. It’s best to approach these songs with medium expectations and then it’s easier to see past the self-trumpeted shambles and join a band who are often having fun.

…Fun.  That’s sometimes what it’s all about, isn’t it?
It certainly should be.