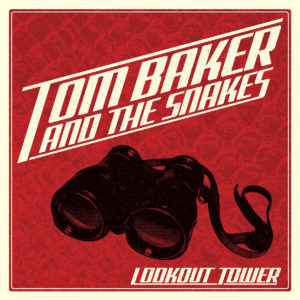 The Snakes finally returned with their highly anticipated full length ‘Lookout Tower’ just over a year later. The three tracks from the original EP are reprised for good measure – giving them a proper home on an actual physical release gives these tunes better odds of finding their audience – but, if anything, they aren’t as good as a few of the newer offerings.

The opening number ‘Gotta Find Her’, for all intents and purposes, is a great indicator of where Tom and his fanged friends are going to take everyone for the next half an hour. Wasting no time in cranking up a riff that presents great in bar-room rock – like Watts with extra volume, or Coyote Shivers actually in tune – the old school guitars chug and swagger as if they’re going out of fashion. Over everything, Baker wheels out a gleefully slack vocal and seemingly delights in hammering home a simple hook. Having warmed up, ‘Run It Out’ is even better, offering a riff that’s somewhere between Slim Dunlap and Bash & Pop. The love of The Replacements is completely unashamed, and while a chunky riff drives the piece, close attention should be paid to a joyously shoddy lead that runs through the bulk of the track, adding plenty of extra edge just below the surface. In terms of style, this track – musically, vocally, lyrically – is an instant classic.

From herein, little regard is given for either too much variety or tightness, but with each track that passes – much like Nightmen’s ‘Fifteen Minutes of Pain‘ – this album gradually asserts itself as an essential party record. ‘Bad Change’ takes the Watts sound and pushes it further towards something Goo Goo Dolls might have used as an album filler back in the day. It’s utterly disposable and yet completely thrilling, while ‘Maybe Come Back To Me’ is perhaps the best tune Watts never recorded. This great track shows the Snakes fusing a trashy bar room aesthetic while also throwing in Thin Lizzy-esque twin leads to bolster the main melody. A hooky chorus really taps into the throwaway vibes and, looking at everything together, this is a track that could stand beside ‘Run It Out’ as one of the album’s best. Lead single ‘Make It Hurt’ kicks off with a scorching lead and powerful drum before dropping back to a safe haven of Watts-meets-Tommy Stinson rockery, while ‘Needle In The Red’ offers up some cool lead guitars set against a retro rock backdrop that would have been meat ‘n’ potatoes fare for Paul Westerberg circa 1992. If the love for The ‘Mats seems a touch heavy handed on these numbers, then so be it – these guys take the guts of that seminal band and remind everyone that some things just never go out of style.

It’s only with ‘Satisfied Fool’ everyone decides to slow down. The result culls more influence from the 70s than most, with a solid but wobbly riff paying a massive homage to the Stones circa ‘It’s Only Rock ‘n’ Roll’, while simultaneously adding a few guitar parts that tip the hat to Rick Derringer at his peak. Song wise, it’s perhaps the least interesting of the bunch, as it is far too reliant on a repetitive hook, but the various lead guitars that drop in and out against the riff provide solid entertainment – especially when factoring in a very old-fashioned mix that accentuates the stereo split. Also going for something a touch more sophisticated, ‘Say Goodbye’ takes the Snakes signature sound and tempers it with a noisy Americana edge. The end result doesn’t always show the vocals off so well, but the multi-layered guitar work is ace, especially with the presence of a slight country twang that could be on loan from an old Gin Blossoms rocker.

The Baker/Snakes ‘Four Songs’ EP suggested good things were ahead, but nothing quite suggested their full-length debut would be this good. Waving a raised middle finger at hipster cool and giving not a solitary fuck for originality, this is a superb old school rock ‘n’ roll record. It’s the kind of record so many hope to make someday but it’s unlikely they ever will. If you root for The Replacements, support Izzy Stradlin’ or worship Watts, ‘Lookout Tower’ is essential.