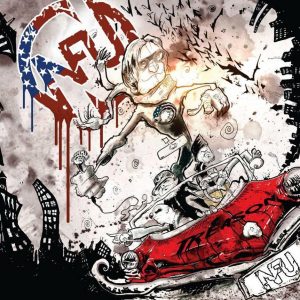 Their worse than fourth-rate approach to such music doesn’t take too long in presenting itself, either, with the title track demonstrating some of the most lumpen wah-wahed riffs you’re likely to encounter. Backing those with a heavy drum line, there’s a feeling that things might even out in time, but they don’t. The rhythm section and lead just aren’t able to keep time together (and people criticise Meg White for far better than this). There’s no finesse – even hard rock should come with some kind of tightness, but this is embarrassingly sloppy. The vocals aren’t any great shakes, either; frontman Dan De Filippo bellows like an untrained beast, his voice is all noise but no real grit or passion…and absolutely bugger all by way of melody. Although their press materials liken this number to Jane’s Addiction in the way it has riffs that “just won’t quit”, that’s an insult to Perry Farrell, Dave Navarro and one of the most distinctive and inventive bands to ever walk the Earth. On the day that tips were handed out on originality, how to play with conviction and with any kind of togetherness, NFU learnt nothing. Based on this hulking and shambolic catastrophe, they were skulking in an alley somewhere, sharing a bottle of cheap booze four ways, thinking that music lessons weren’t really necessary.

‘The Details’ begins with guitarist Jeremy Pitcoff cranking out something that sounds like a mangled Hendrix theft played by a man with three week’s experience of his six stringer, crossed with the least interesting Red Hot Chili Peppers tune, while the rhythm section – better than before, but still absolutely appalling – do their best to anchor a solid, if unremarkable groove. Unremarkable would be preferable to bad, of course, but then De Filippo opens his mouth and his distorted bellow (somewhere between average bar band frontman and Anthony Kiedis in a bad mood) ensures this has no chance of recovery. As for the song writing, it seems almost as half-arsed: the chorus seems to be the word “closer” repeated ad infinitum, while the rest of the lyrics have a tendency to just wash over the listener. It might be a bit better than the opening track but, man, it’s still at least five kinds of boring.

Despite opening with a more interesting bass sound, ‘Burning Man’ quickly descends into fairly dirgy hard rock where two riffs collide with force, only to find they’ve unwittingly enabled a messy workout that NFU so obviously struggle through and the vocal is worse than anything heard previously. The bulk of the music is generic hard rock, under-produced and woefully under-rehearsed, while even more thoughtless bellowing. Throughout, as usual, everyone seems incapable of basic time keeping, by the time the last chorus rolls around – assuming anyone’s still listening – that boisterous noise that De Filippo thinks passes as a rock vocal becomes truly unbearable. Thankfully, being only an EP, the torture is nearly over…and last up, ‘Cover Charge Queens’ mixes the previous blues based sounds with an emptier 70s wailing. The much looser arrangement really exposes NFU’s sorely lacking talents as the vocal booms unapologetically over rudimentary guitar riffs that still appear hopelessly sloppy. The drums fail to keep time in places and the eventual lead guitar break sounds like the efforts of a man wearing mittens. Everything here is so off-key it hurts. Those other tracks were terrible enough, but this…this is so bad, it’s almost beyond comprehension.

There’s literally nothing here to get excited about. NFU are one of those bands who seem to think that a production rawness will somehow make up for their horrendous playing or their wall-to-wall song writing mediocrity. Despite previously being called “unique” and “100% original” (presumably by someone who is either musically ignorant or has no clue what those words actually mean), NFU are musically incompetent. This EP is the work of a band not even ready to enter a studio, let alone share their results with an expectant world of rock fans. When there are albums by Blackberry Smoke, Blues Pills, Rival Sons and a whole world of other revivalists at hand – all of whom make this sound like the very worst aspects of amateur hour at your local boozer – frankly, why even bother? ‘Treason’ is truly terrible in all respects.