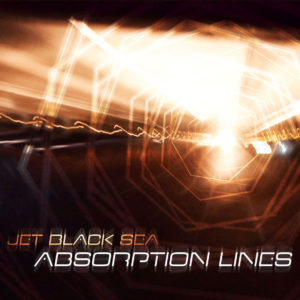 Second albums can be the trickiest of beasts to let out into the wild, but Jones and Simons had been stockpiling ideas. The first results of those, collected here on ‘Absorption Lines’, are sometimes more ambient than the work of 9SC – very much as you’d expect – but on the other hand, there’s some great rock here too, featuring contributions from friends Tony Patterson, Brendan Eyre and Pieter van Hoorn. A good proportion of this second album is markedly different to the debut, which is obviously a good thing as you wouldn’t necessarily want to buy the same album again (that said, it’s never really hurt AC/DC, has it?).

On the surface, ‘Absorption Lines’ seems like another collection of (largely) instrumental work suitable for cherry-picking tracks, but the underlying theme of the disastrous Apollo 13 mission and the way various broadcasts between Earth and ship are used to either link the musical passages or to boost quieter moments gives the album a very complete and focused style. The opening piece, ‘Wrong Turn’ echoes many of the atmospherics from the debut long player at first; there are the expected droning keys and the essential reverbed guitar sounds, but these are offset by a rather angry drum loop. The emerging sounds could provoke a love/hate feeling – especially for those expecting something more sedate. It’s confrontational but never too jarring, but that’s not all: at the midpoint of this number, the band breaks into a surprisingly immediate melody, with Jones churning out huge metallic chords against the meaty drum sound. Rather more akin to the less heavy-handed parts of Porcupine Tree’s prog-metal years than anything else, it’s a great showcase for Jones and his tones and easy to suspect that this was spawned from ideas left over from ‘Leaves’. Those hoping for more of a world music slant will be instantly thrilled by ‘The Sixth Wheel’, which mixes a near cymbal free drum groove with some swirling keys and an almost Tunisian feel to the other instrumentation. It’s the kind of thing that could go on for almost three times longer than it actually does and it still wouldn’t outstay its welcome. By the time this is driven forward by a chugging riff – with a huge understanding of melody within it’s heaviness – the number takes a further leap towards 9SC once more, but the end result is very pleasing…and surprisingly catchy for something without any kind of vocal hook.

An extended interlude, ‘Jumping To a Conclusion, Part 1’ throws electric pulses from the speakers as a sharp reminder of impending doom, or a broken link over which a dirty circular riff accentuates a feeling of unease. The contrast between Jones’s guitar strings and Michel’s electronic treatments is constantly pleasing, even though this is not much more than a build up towards the title track. Approaching the halfway mark, that title cut gives far more musical scope than anything heard here previously. Another selection of radio frequency broadcasts sits against long drones, while Jones throws out various distorted shapes with his guitar. This is a great exercise in minimalism for the first couple of minutes, which could prove slightly frustrating to those wishing to immerse themselves within something more melodic, but even with such a cavernous feel to the arrangement, it’s still far more interesting than the dull style-over content approach of Public Service Broadcasting’s second full-length. Slowly, extra guitar parts reveal themselves and with the final addition of a strummed acoustic and gentle rhythm against the spacier sounds, with a nod to Porcupine Tree circa ‘Voyage 34’, everything feels complete. More electronica and the softer sounds evoking a Fender Rhodes showcase JBS’s love for all things retro and by the time Jones breaks free with a huge and soaring solo, there’s no question that this is the one of the albums standouts. With wordless vocals stepping up to the plate and the eventual re-introduction of sampled voices, it feels like a painstakingly cerebral eleven minutes, with every movement carefully plotted as if it were the actual orbital journey itself.

Although, at this point, the album is in danger of peaking, there’s a little more gold to be mined. ‘Cathedral’ heads somewhere even darker, firstly with cinematic synths and minor sounds which recall early nineties work by Vangelis. A general disquiet seem to dominate until things become almost unbearable…and then a huge melody explodes at the point where such an idea seems unthinkable. Jones pushes himself into the spotlight with some solid guitar leads – his playing, in part, seems very Gilmour-esque here – which placed against some hard, brassy synths is rather striking. In further uncharted territory, this allows a tough lead vocal to add an extra dimension and to also reinforce a very rocky edge. Although the presence of such a vocal could have merely just given this a close parallel with Nine Stones Close, it’s not really the case: there’s still a feeling of the results being quite different to Adrian’s “other” band. A number that gives a little more with each play, ‘Cathedral’ is also very much a number of two halves – and sounds even better with some volume applied!

Another epic, the eight and a half minute ‘Hours Slip Into Days’ is very understated, with slow piano chords and synthy sounds conjuring images of a capsule floating through space, disconnected and with no hope of ever returning home. Another vocal piece, it’s mellow blend of programmed beats, treated voice and dominant piano has echoes of ‘OK Computer’ era Radiohead as well as a few more ambient treats. The stark contrast between tinkling keys and hard bass drum is effective, though never as pleasing as the use of a disconnected vocal. After four minutes, the vocal effects fall away, the bass increases and the resultant Steven Wilson-channels-the-Floyd mood is surely one that most prog-heads will enjoy, assuming this album appears somewhere on their radar. With another lovely, melodious solo to finish, this track has so much emotional pull, it’s almost worth checking out ‘Absorption Lines’ for this alone. A final call to mission control ushers in the final broadcast, and ‘133 Hours’ comes across as particularly poignant. Slow beats, reverbed sounds and a beautiful bassline all come together to create a tune that sounds like a heartfelt last calling to life, with it’s collision of busy electronic sounds and swelling proggy melodies that are all very much the epitome of everything Jet Black Sea have set out to create on this second release. It’s perhaps too short, but then again, if it were longer, perhaps it’s blissful, elysian gloom wouldn’t seem like such a welcoming sound. Whatever…this is terrific.

‘Absorption Lines’ isn’t always as immediate as ‘The Path of Least Existence’ – ‘Hours…’ and ‘133 Hours’ aside – but once it hits you, it’s very rewarding. There are some superb ambient and proggy works here. Between them, it seems neither Adrian Jones or Michel Simons believe in merely repeating themselves – something which clearly didn’t bother Roger Waters just a few weeks prior to this disc’s release. It’s rather sad, therefore, that a whole world of narrow minded middle aged men will spend months convincing themselves that Roger’s shameless Emperor’s New Clothes routine is the best thing to happen to 2017, while a lovingly crafted DIY prog production such as this will likely go unnoticed by the masses. Masses who’d quite like it, too, if only they could pull themselves out of a rut and try something different. If only, indeed.