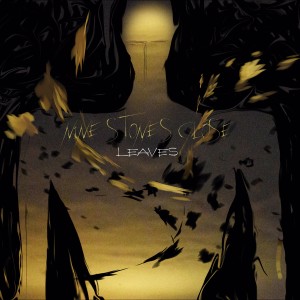 By the beginning of 2013 and with two key members gone, the band found themselves at a musical crossroads. Within the following year, there was much talk of a second Jet Black Sea recording, but things had gone somewhat quiet in the 9SC camp. However, Jones was busy penning new material and, with a new line-up, ‘Leaves’ appeared in the late spring of 2016.

Those expecting a record that obviously follows its predecessor are in for a surprise. Possibly even a shock. Obviously, the introduction of a new vocalist changes things, but the bulk of ‘Leaves’ is almost nothing like its predecessors, musically, vocally, or even spiritually. It’s angry; it’s heavier; it’s about a hundred times darker. With this release and a vocalist with a wailing edge to his delivery – combined with Jones’s love of Tool – ‘Leaves’ takes 9SC in a more progressive metal direction. There are still more than enough quiet and wandering passages to keep the older fans happy (something especially true of the title cut), but some will find that this record takes a while to click. In some ways, this album is a hit and miss affair, but the bits that work…really work.

With a wash of keys and a gentle pulsing sound, ‘Complicated’ sounds like it’s headed deep into some late 80s prog at first, but those keys soon give way to a chunky guitar riff. With a choppy sound, Jones’s guitar is just as responsible for creating the tune’s solid rhythm as the rhythm section itself. New boy Adrian “AiO” O’Shaughnessy makes his entrance quietly, his voice gently flowing across the music; a voice with a kind of bendy quirkiness. Upon reaching the chorus, everyone breaks into full prog-metal mould, with AiO wailing accordingly. His unrestrained approach is one that seems a touch jarring at first, to the point where you’d wonder why he was picked for 9SC at all, more metal oriented or otherwise. However, moving into the second verse and beyond, his dark, crying tones seem a good fit. Whether the slightly Tool-meets-grunge-meets-prog aspects of this track are the best introduction to this incarnation of 9SC, that’s a different matter… Some fans could leave at the first exit.

From here on in, there’s nothing that comes in easily digestible chunks, as the four tracks making up the rest of ‘Leaves’ each clock in at least ten minutes apiece. Obviously, that’ll sway a few people who are still clinging onto the “long equals good” mentality, not always understanding that there are often equally good (or even superior) shorter prog tunes out there. A slow and lumbering tale of staring blankly at the media and its brainwashing effects, ‘Goldfish’ is superb. AiO’s vocals appear mumbly and unsettled at first – adding a touch of the theatrical to suit the lyric – while drummer Pieter Van Hoorne plays a heavy tribal beat. Unexpectedly, though, this doesn’t go the full Tool route; instead, the band keeps things to a very rhythmic and steady pace, with Jones adding some atmospheric guitar lines to glue the pieces together. The chorus – yes, surprisingly, it has one of those – is terrific; as harmonies croon “welcome to my mind” in a style that isn’t a million miles away from a proggy Alice In Chains, it only takes a couple of hearings before it becomes an album highlight. Jones’s echoing guitar, retainis a strong presence throughout, adding a few flourishes that’ll please the more traditional prog fan. Surprisingly, during a couple of more melodic passages, a few of his leads sound like a grubbier version of Steve Rothery circa 1984 and on the quietest parts of a very epic tune, his cleaner tones lean even farther towards 80s prog. Although one of those numbers that could somehow achieve just as much in half the time, ‘Goldfish’ is a strong showcase for all involved.

Tapping further into the metal aspects, ‘Lie’ works a distorted riff over which some great lead work adds a complex layer. Discordant guitars throw out various shapes while the drums and bass desperately try and hold everything together. AiO comes forward with some (frankly) ugly wailing and – for the briefest of moments – things get really messy. It’s only once the band decides that dropping into something quieter is best all round that the track finds its feet, but even then, the melodic aspects of the tune are slight. Taking up the majority of a lengthy instrumental workout, more choppy guitars jostle against some ambient keyboards placed over a measured beat; despite there being a lot going on, it fails to do anything interesting until Jones’s featured solo several minutes later. That solo, equal parts melody and anger, brings out the fire in some of his best playing – a pity, then, it couldn’t have had pride of place as the climax of a much better number. With ‘Lie’, all of the darkest parts of 9SC’s threatening side come forth, but sadly, also become rather laboured. Thankfully, any disappointments get swept away by the arrival of ‘Spoils’, a grumbling, dark epic, that at over sixteen minutes manages to be both adventurous and grandiose…in a good way. This track is the very definition of slow-burner, beginning with Mark Lanegan-esque crooned vocals, a noodled bass tune and a few soaring guitars.  From here, it’s impossible to second guess where things will go…and then the band joins together on a heavy, slightly bluesy riff. Keyboards parp the sound of strings and the rock edge of AiO’s vocal range re-appears – but, thankfully, this time, he’s really in sync with the material. Although a few of the heaviest parts get lost en route, this heavy-ish approach provides the backbone of the track’s first movement, with an almost Morrocan lilt to the music – did someone say “Kashmir”? – and Jones seems very much in his element with the style. Around the seven minute mark, it’s all change, as echoed voices pave the way for some acoustic strums and atmospheric electric guitar sounds. With a clean vocal and multi-layered guitars, this is the closest to ‘One Eye On The Sunrise’ as we get, as the spacious music and measured vocal tap into older prog styles. The third part of the track reintroduces heaviness – here, 9SC sound heavier than before, with a defiant bottom end dirtiness and relentless guitars. It’s not so much progressive metal as alternative metal, but a few plays really allows the many layers of this brief and intense interlude to come through…and then with a couple of minutes worth of layered guitar and vocals, the main part of the tune is reintroduced, bringing everything full circle. Like the bombast of Zeppelin (though not always the sound) meeting the wilful artiness of Tool, there’s much to like here. The limited production values rarely give the drums the best send off, but as they say, you can’t have everything.

If, on some of this album, O’Shaughnessy’s louder tendencies make him seem like an odd choice for 9SC, it’s on the title track – placed as a lengthy, atmospheric closer – that he really clicks with the rest of the band and really comes into his own. ‘Leaves’ takes a sidestep from previous heavier workouts and concentrates far more on reverbed guitar and spacious drones. The ringing guitar sounds are superb throughout and when placed against an equally measured drum part, it creates something magical and very cerebral. Although rarely deviating from the original musical idea for eight minutes, there’s a sense of things building gradually and eventually the music – settling somewhere between ‘Molok’ era Gazpacho and the more melodic Alcest – reaches a peak which hammers home a repetitive lyric that gives the album a final push towards victory; the missteps of ‘Lie’ an ever fading memory. …And then, when everything seems done and dusted, a simple piano melody, occasionally recalling U2’s ‘October’ (perhaps unintentionally) provides the last notes of a strange and unexpected work. An odd move to introduce such a standalone musical theme at the death; 9SC leave their listeners hanging, potentially pondering whether ‘Leaves’ will be representative of future output or merely a snapshot of their current state – an experiment in growth and change.

The more avid followers of Jones’s work will likely welcome the idea of branching out and a change in direction, but those who preferred the older sounding prog elements within the previous releases might not take to ‘Leaves’ instantly. Bands should evolve – even prog bands, otherwise they become as pedestrian and predictable as Pendragon – and with ‘Leaves’, 9SC could be accused of many things, but resting on their laurels is not one of them. It might lose a few fans along the way, but the darker aspects of this work makes it ideally suited to picking up some new followers. Like it or not, there’s no more sunrise: it’s time to keep one eye on the expansive horizon.