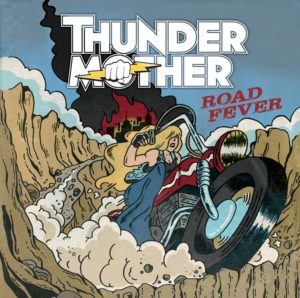 Sex should never be an issue when it comes to musical abilities. As Vixen’s Share Pedersen once put it many years ago: “[being a good musician] has nothing to do with whether you have a dick – that’s not what you play your instrument with!”, but even so, from The Runaways in the 70s, Girlschool, Femme Fatale and Vixen in the 80s, not to mention countless others throughout the 90s and beyond, the all-female band seems to have (over)excited many a rock fan – and not necessarily for the right reasons.

Since their formation in 2010, Thundermother – five denim clad Swedes armed with ample amplification and an obsession with AC/DC – showed themselves to be truly committed to their chosen style. They quickly attracted a cult audience across Europe and in the lead up to their third full length LP ‘Road Fever’ worked really hard to expand their audiences on the live circuit, a place where their old style rock is (understandably) at its best.

Given their love for AC/DC is huge, it comes as no surprise when ‘Give Me Some Lights’ sounds almost like a straight lift from material circa ‘Flick of The Switch’. The loudly mastered guitars crank out a riff that’s an overdriven stomper, a little faster than mid pace, allowing for some serious head-nodding, while vocalist Clare Cunningham belts out a slightly gravelly sound, well suited for the job in hand. A grumbling bass stokes up the AC/DC elements even more. Although nothing remotely original, it’s fine for what it is, especially considering it’s played with gusto and passion. ‘It’s Just A Tease’ brings more of the same, stoking up the shredding leads in the process. With the repetitive chorus and a dirty lead guitar break, the core elements are a dead ringer for at least half the material on The Donnas’ 2002 elpee ‘Spend The Night’, but although possibly better played, Thundermother’s take on similar styles and themes doesn’t come across with quite the same trashy tone. Moving the goal posts a little farther towards ‘Fly On The Wall’ era AC/DC for the opening grubby rhythm, ‘Vagabond’ wheels out some of Thundermother’s grittier elements on a slow number, overflowing with enjoyable twin leads. Beyond that, there’s not a lot to take away; the lyrics are uninspired – though delivered with a full sense of passion – and the melodies are often a little ordinary.

Much better – and one of the album standouts – ‘FFWF’ attacks with a bassline appropriated from AC/DC’s ‘Let There Be Rock’, couples that with some tough rawk guitar, a cheeky spoken interlude that’s not so far from the earliest Runaways, then serves the whole rock ‘n’ roll collage with a sharp lead voice and gang vocal hook. Naturally, this leaves the listeners eating their dust, a tough job done in just over two minutes. Adding a funky strut to familiar sounds, the opening bars of ‘Thunder Machine’ tip the hat to the more flippant musical aspects of Bon Scott era AC/DC before doing a surprising about turn into dirty blues, more akin to forgotten nineties bands like Kiss of the Gypsy. The arrangement allows each band member enough time to stretch out, never seeming too rushed. Tilda Stenquist’s drumming appears immovable in its all-round steadiness – a much harder task than thrashing it out – while rhythm guitarist Giorgia Carteri plays some mean sounds throughout. It doesn’t sound particularly special on first hearing, but given time, this more spacious sound really shows Thundermother aren’t just one trick ponies. Better yet, ‘Deal With The Devil’ casts aside all Angus Young aspersions and sweats it out by playing a more obvious tribute to early Motorhead. There’s no rattling Rickenbastard or caned vocal growl, but the pacing, taut riffs and sheer energy is a dead ringer for that great band in their prime. The shouty chorus spews out clichés, but the music makes up for that, since the guitar work has more than a pinch of Fast Eddie Clarke at its heart. All things considered, this track joins ‘FWFF’ as one of the album’s shining lights.

As for the most of the rest of this particularly succinct long player, it’s business as usual as per the like of ‘It’s Just a Tease’, with ‘Alright Alright’ pummelling a pace and bringing riffs that sound like a tighter approximation of The Donnas before wheeling out endless clichés about the highway, speed and being unstoppable; ‘Roadkill’ marks time and cements the band’s preferred tried and tested approach with (much) more of the same, and ‘Enemy’ sticks firmly to late 70s hard rock with a distinctly Airborne bent. Last up, ‘Rock ‘n’ Roll Sisterhood’ – as it’s title very much suggests – cares not for cool and Thundermother are more than happy to “show [us] what [they’re] made of” as they’re “not gonna turn it down” when “making rock ‘n’ roll forever”. If the music from ‘Electric’ era Cult got a JettBlack makeover, it might sound something like this. It’s a touch less AC/DC than some tracks, but by the time the near flawless lead guitar kicks in, it’s still impossible not to have the odd flashback from the mid-80s output from Brian, Angus and co. Thundermother so obviously love the style so, with that in mind, there’s little point in doing anything too far out of character.

This is a cheeky album. On first spin – and even the couple of spins beyond – it seems predictable, old fashioned and occasionally a bit embarrassing. …And then, at some point after you’ve let down your guard, while none of those feelings change per se, some of the songs start to charm with their boundless energies and raised-middle-finger attitude. While it definitely lacks the brilliant brattishness and all-important reverse sexism of The Donnas’ ‘Spend The Night’ album (possibly it’s closest musical bedfellow), when ‘Road Fever’ hits its stride, the combination of four chords and pin-sharp riffery can be fun. For those still proud to wear their Glenn Tipton patented red leather kecks on a Saturday night and still look to party like it’s 1984, most of this disc will definitely appeal. As albums go, ‘Road Fever’ isn’t cool, but sometimes cool is over-rated.