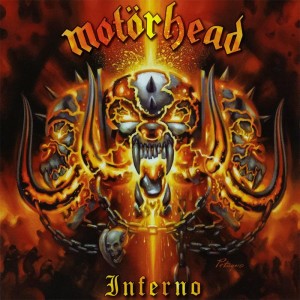 Throughout the following decade, the band released albums at regular intervals. Most had their memorable moments (2000’s ‘We are Motörhead’ in particular should be praised for its sheer old-style Motörhead ferocity, even if the songs aren’t always entirely memorable) , but generally speaking, that new vigour promised on ‘1916’ seemed confined to those sessions.

The band’s seventeenth studio album, ‘Inferno’, was released in 2004, marking thirty years of Motörhead. Lemmy is joined by long-time collaborators Phil Campbell and Mikkey Dee, whom first performed as a trio on their 1996 album ‘Overnight Sensation’. As an album, ‘Inferno’ features no obvious skippers and no half-arsed filler, making it one of Motörhead’s stronger offerings – possibly the strongest since ‘1916’.

The thunderous no-nonsense approach you’d hope for is obvious straight away, with ‘Terminal Show’ – one of two numbers to guest feature Mr. Steve Vai. The energy (as always) is welcome, though neither this (or the other Vai collaboration, ‘Down On Me’) being anyhing you won’t have heard a hundred times from Lemmy and co, but Vai’s presence ensures the guitar solos stick out half a mile with their whammy bar showiness. Longtime fans will, of course be happy with the familiar approach, while surely Vai jumped at the chance of slapping his signature sounds over a Rickenbacker bass growl. The tour-de-force of ‘In The Name of Tragedy’ combines the power of Lemmy and co’s best speed-metal-influencing bombast with chugging downstrokes, making it classic Motörhead; Lemmy’s rasp cuts through the riffs with a sneer helping create an unmistakable sound, but musically, it’s Mikkey Dee’s double bass pedal work providing the track’s most uncompromising edge. Phil Campbell’s featured solo is chock-full of string bending ugliness – all in all, it’s the sound of a band you won’t mess with.

For those looking for typical Motörhead speed, ‘Fight’ presents the band at full pelt, beginning with Lemmy asking for his bass to be turned up. The chorus is incredibly simplistic, with Lem barking the order to fight somewhat repeatedly, but the speed and aggression make this a number worthy of standing proudly alongside Motörclassics like ‘Bomber’ and ‘Overkill’. A similar speed provides the main thrust of ‘Killers’, but rather than sheer anger as the dominant force, plenty of enjoyment can be gleaned from a classic sounding guitar riff courtesy of Campbell; it’s sound reminiscent of the old days of the New Wave of British Heavy Metal. ‘In The Black’ slows things down to a pounding rock riff, but still retains that oomph which makes Motörhead unmatchable when at the top of their game. While slower than ‘Fight’ and ‘Killers’, there’s no way on earth it could ever actually be described as slow. The riff is effective and Lemmy’s vocal works well throughout the verses, but the chorus gets a little cluttered with the vocal being multi-tracked, as he provides both lead and backing. Campbell offers a great solo, though, driven entirely by bluster and wah-wah. ‘Keys To The Kingdom’ takes things down another notch, presenting a hard rock swagger with plenty of attitude. It’s slightly too jaunty to be completely menacing, but each of the individual elements are top notch, in their unfussy approach. Closing the album, ‘Whorehouse Blues’ is an acoustic blues workout, suiting Lemmy’s rough-around-the-edges vocal perfectly and there’s even a harmonica performance from the man himself. No nonsense in a different style – a sassiness coming from Lemmy’s growl makes up for any slow pace and the style of this track surely provided the basis for Motörhead’s bluesy acoustic reworking of the classic ‘Ace of Spades’ released in the early part of 2011…

‘Inferno’ might not break much new ground, but proves that the band still packs an almighty punch when they want to – even some three decades into a much-loved career. Great playing and great songwriting put this at the forefront of “essential” Motörhead releases with ‘Ace of Spades’, ‘Overkill’ and ‘1916’.

Read a review of ‘The World Is Yours’ here.