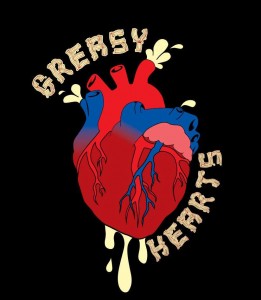 A rough ‘n’ ready five song cassette, the first release from Brooklyn’s Greasy Hearts is also the first release for uber-DIY label King Pizza Records. Likened by the label’s head honcho to the sound of Jello Biafra jamming with The (Johnny Thunders) Heartbreakers, the band lay down some unfussy garage rock that’s potentially great…provided you can accept the sound like they’re playing from the end of a corridor while going crazy with the reverb.

About halfway through ‘Too Much Pleasure’, frontman Peter A. Wilderotter doesn’t sound so much like the legendary Biafra as much as New Bomb Turks man Eric Davidson at a particularly loose rehearsal. The opening track mixes a rock ‘n’ roll ethic with a rolling surf edge, over which the yelping vocalist leads the rest of the band into a trashy garage workout. By the time they’ve lolloped into the chorus, a simple but harder drum allows a backing vocal to bring extra edginess. It’s a good example of the Hearts’ unrefined sound, but there’s better just around the corner. ‘You Want Me Too’ is a great example of the energy summed up by this quartet when they have all cylinders firing. Drummer Gabe lays down a simple rock ‘n’ roll backbeat, while the twin lead guitars have a heady twang. What really counts here, though, is the number’s driving riff – a simple but solid affair heavily modelled upon Rocket From The Crypt’s classic ‘On a Rope’. Choppy chords and a sheer energy make this far better than the opener on all fronts.

‘Please (Don’t Make It Freeze)’ is less tuneful, but what it lacks in general melody it makes up for with a real grittiness – the middle of the number giving way to a furious guitar break, the kind that would have been applauded by the short-lived speed rock ‘n’ rollers Thunderfucks. Direct and to the point, this is the sound of garage punk at full pelt. ‘No Rhythm Blues’ is a fast four-beat crasher with the drums firmly in the driver’s seat. In terms of chorus, the dual vocalled delivery of the title provides one of the more memorable hooks before everything descends into another fast and furious guitar lead. Slowing down a notch, ‘Stone You’ presents a rough band attempting a number that sounds like a little known gem from the Spector catalogue. Obviously, The Greasy Hearts never sum up the energy or carefree spirit of similar material from the Ramones debut, but it’s easy to see what they were aiming for. Musically, the real star here is Joe Farber whose lead breaks in the left speaker bring almost as much grit to this mid-pacer as those faster numbers, adopting a hard rock ‘n’ roll twang akin to New York’s Beat Rats, while a second guitar (in the right, naturally) has far less finesse, throwing out muted notes with abandon.

Some may find the very limited recording budget a bit hard going – granted, they’ve worked on a fraction of the budget afforded to the aforementioned Beat Rats or Belgium’s own Ratboys – but there’s potential here: it’s just heavily buried at this early stage. You’ll just to imagine how they might sound if they were given the recording budget of The Hives’ genre classic ‘Veni Vidi Vicious’! It’s probably a release that’ll speak to genre-fans only, but those fond of any of the bands mentioned should give them a listen – just expect things to sound pretty raw.