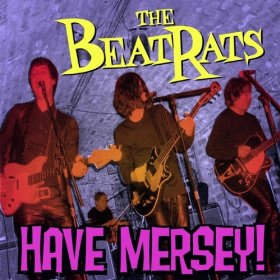 Particularly appealing on this disc, the instrumental title cut blends a walking bassline with a steady beat, creating a simple rock ‘n’ roll backdrop while guest musician Brian Jones (sax) parps intermittently with a rockin’ jazzy cool.  A great three minutes; it’s obvious these guys love what they do.  During ‘Even Steven’, Robert Pinnock’s energetic drumming powers the band with abandon, his playing style heavy on the cymbals, big on crashiness, while band leaders Frank Max and Paul Garwood’s voices come together with an excited gruffness that really evokes their chosen period.  There are occasional yelps of excitement, though they perhaps wisely refrain from shaking their heads and letting out carefree “woo” – after all, it’s fair to leave McCartney something.

Other tunes mix a similar basic quality with equally simple choruses, hardly veering from their original blueprint, but still…that’s kinda what you’d expect from an album where the band are shown in Liverpool’s Cavern Club on the sleeve –  if you came expecting any different, you’d be pretty dumb.  Even on the couple of occasions The Beat Rats decide to take things down a notch – as per the love song ‘You Were Always Mine’ [not too far removed from the likes of ‘Misery’ and ‘Anna (Go To Him)’], there’s a love and professionalism shining through at all times. The album’s weakest offering ‘Buzzoff Nimrod’ uses the same formula as most of the tracks here, yet is noticeably sloppy.  The guitars have a strong twang, but the playing is a little off; not as off as the vocals, however: while most performances pass muster, it’s obvious here that nobody in the band is particularly sharp when it comes to a harmony (an element of the band that’s far more raucous and garage punk in a live setting). In this respect, there are times when The Beat Rats are certainly closer to the likes of The Modern Lovers or the legendary Real Kids than The Beatles or their closer Merseybeat peers.

From its opening cry, ‘Nyah Nyah’ initially feels as if it might just fall foul of a little novelty, but it quicky sprouts into a great, uptempo instrumental where Max and Garwood indulge in more heavy twang, in the spirit of rock ‘n’ roll from The Cavern Club, but also US guitar greats like Chuck Berry and Duane Eddy.  …And yes, the main riff is gently modelled upon the childhood sneer of its title but, thankfully, is never played in a way that ever grates.  Closing the album, ‘Off The Wall’ marries a simple and repetitive chorus to a greatly energetic riff; again, it’s just pure rock ‘n’ roll played for fun, but if you want something that sounds like Flamin’ Groovies or Stray Cats covering Eddie Cochran (although not as strong in the vocal department, naturally), then look no further.

Even with a couple of slightly wobbly moments, this is required listening for fans of early sixties pop/rock ‘n’ roll with a hard twangy guitar.  ‘Have Mersey!’ does exactly what it says on the tin, and as such, should strongly appeal to those who love The Flamin’ Groovies et al.  In just over half an hour, The Beat Rats rave like its 1962 again…and despite a cover of the Larry Williams penned ‘Slow Down’ conspicuous by its absence, the band pull things off in a wonderfully knowing style.