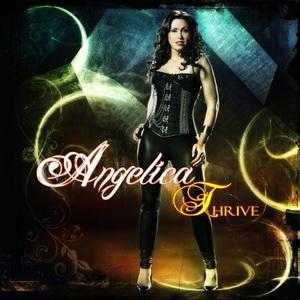 Since this debut record from Angelica Rylin pays homage to her childhood heroes Robin Beck and Ann Wilson, it’ll come as no surprise that the album, therefore, ploughs a well-worn furrow of melodic rock.   With Frontiers Records regular Daniel Flores handling production duties/drums/song-writing and other regulars Alessandro Del Vecchio and Robert Sall also having a hand in proceedings, the whole thing feels like an all-chums-together affair.  There’s nothing wrong with that per se, but obviously the combination of a familiar team and a rigid musical blueprint makes ‘Thrive’ feel wholly predictable.  So, given that this album breaks absolutely no new musical ground whatsoever, why should you check out Angelica, when there is so much other rock music out there vying for your attention?

Firstly, she has a far stronger vocal presence than label-mate Issa Oversveen [her closest musical peer at the time of this release]. Secondly, while the conscripted songwriters have turned out a dozen melodic rock tunes that aren’t exactly a world away from things they’ve written previously, the hooks are big and the punch given off Flores’s production sound even bigger.  The result – although ridiculously predictable – is a really solid melodic rock disc.

At the chunky end, ‘Riding The Storm’ crashes in with an intro of meaty guitars and pomp-inflected keyboards, before subsiding for something far more melodic. During the verses, clean picked guitars evoke a very 80s sound, while Angelica’s voice settles for something strong, yet friendly.  The heavier intro finds its feet during the chorus, where a simple refrain combining the title with other clichéd sentiments like “rising from the dream” allows the vocal to reach for a little more belt.  A few Journey-esque keys big-up the old school sounds of the punchy ‘To The Rescue’, a tune that recalls the kind of brilliance that filled Robin Beck’s ‘Trouble Or Nothin’ debut, while the bigger punch brings the number more in line with the Swedish AOR sounds of Wigelius.  Guitarist Per Bergquist steps up for a nifty, but very brief guitar solo; it’s almost as if he doesn’t want to upstage Angelica – after all, it’s another number that’s all about that big chorus.

As ‘Can’t Stop Love’ begins, the tinkly keys and accented vocals lend themselves more towards the symphonic Scandinavian sounds of Within Temptation, but soon enough, the classic AOR strains kick in for another chorus that recalls AOR’s hey-day.  The featured solo here (courtesy of renowned studio-hand Mats Lindfors) is far less forgiving than most: he hammers his whammy-bar in a fashion that only Steve Vai would consider subtle, while throwing out a few widdly notes as if he’s accounted for how many bars he’s due to fill…without actually accounting for which song he’s playing on.  Even so, the huge, ballady nature of the piece combined with another decent vocal allows this to push all the right buttons.

The mid-paced chug of ‘Nothing Else You Can Break’ provides this album’s essential track – a number strong enough to rival anything on the Find Me album for 2013’s best melodic rock performance.  Adopting the oft-heard ‘Don’t Walk Away’ riff [come on, you know the one by now!], the combination of hard rock bottom end and clean-toned guitar picking is lovely, while Angelica sings her heart out, doing her best to put her mark on music that would have suited many of her key influences back in 1986.  ‘I Am Strong’, meanwhile, has a great chorus but suffers from a thinner production sound – almost as if it dates from a different time entirely – while guest guitarist Jasper Stromblad (from the excellent In Flames) is on hand for some surprisingly understated twin lead guitar work.  More was expected from Stromblad’s appearance – perhaps he just wanted to prove his versatility, reigning things in so not to stand out too much.

‘This Kiss Is Just For You’ brings a full keyboard quota, some really dated handclap sounds and a bouncy riff before Angelica throws herself into a harmony-filled chorus, while ‘You Will Never Win’ at first promises to be more 80s and American sounding than any of the other numbers.  It’s not long, though, before the Scandinavian origins of the performers give things their distinctive slant.   There’s nothing which makes either track stand out against ‘Thrive’s strongest tracks, but if you’re into this particular style of melodic rock, you’ll find something to enjoy…

Looking at the album as a whole, ‘Thrive’ is the dictionary definition of “by-numbers” with regards to many of its stylistic choices. Sure, the basis for most of the songs are production-line from the in-house song writers and, therefore, could have been doled out to any number of AOR acts, but it’s hard to argue with the outcome; like a musical comfort blanket, most genre-fans should be thrilled with the results.  If you want a slice of top-class AOR/melodic rock from long-past those glory years, you could do far, far worse than check this out.