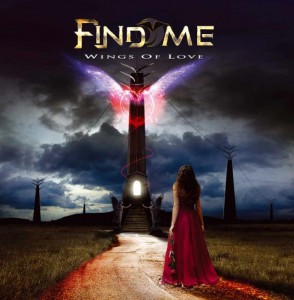 Bringing together the talents of Robbie LeBlanc (Blanc Faces), Daniel Palmquist (Xorigin) and noted session drummer/engineer Daniel Flores, Find Me is a project with strong foundations.  With a selection of songs written by Frontiers Records in-house regulars Allesandro Del Vecchio and Tom Wilson and contributions from Issa and Erik Mårtensson, the whole package is designed to be the AOR fans dream.  Usually when such big ambitions are chased such projects falter, but almost everything about Find Me works excellently.

Initially, many of the songs sound a little lacking in the bass department, but before too long it becomes more obvious that this was a deliberate move, making things sound more 80s and, as such, very much in keeping with the classic sounds the band set out to emulate.  The bombastic ‘One Soul’ manages to blend the classic 80s sound of American melodic rock with a touch of the punch that comes with the Swedish releases from melodic rock’s later years.  LeBlanc nails the kind of chorus found on the first Takara album, while you’ll also hear an absolutely killer guitar solo from Daniel Palmquist (his only foray into lead work, having all the other solos contributed by guest musicians).  Tackling a slower pace but maintaining a surprising punch, ‘Unbreakable’ captures the whole band in fine form.  The rhythm section pave the way for guitars to wander shamelessly into the “Don’t Walk Away” riff, with a melodic chug and clean-toned accompaniment combining to create one of the best sounding tunes for LeBlanc to bend his natural voice around.  Chuck in a couple of killer key changes plus another strong chorus and the years of these musicians’ individual experience explodes once they pull together.  The ugly keyboard solo is a teeny bit misjudged – all squirly 70s noise (a la the Spys debut) when a crisp 80s sound might’ve worked better – but everything else borders on being the best post-80s AOR you’re likely to hear.

It’s hard to listen to the intro to ‘Another World’ and not be reminded of ‘Separate Ways (Worlds Apart)’ by Journey in the way the chugging rhythm guitars collide with pomp keyboards and a heavy drum beat.  Throughout the rest of the track, though, Find Me tap into a little more of their own identity and Palmquist’s rhythm work has a continuously great presence, while Daniel Flores hammers out more pompy keys with superb results.  ‘Firefight’ shows the rocky side of Find Me in good form as they offer a pre-chorus that pushes a shameless whoah into the listeners’ ears with gusto, before delivering the kind of melodic rock hook that pushes all the right buttons.  Robbie’s voice is so perfect for this kind of material.  As with most of Find Me’s tunes, it’s hardly groundbreaking, but in celebrating melodic rock’s glory years you’ll be hard pushed to find it done better.

Elsewhere, ‘Wings of Love’ is AOR with a slightly tough edge – the kind mastered by the likes of Jeff Scott Soto – while ‘On The Outside’ is old-school driving rock that feels good in its unashamed cheesiness and ‘Eternally’ allows LeBlanc to exercise on the kind of ballad that would befit any of the melodic rock greats… There’s not much point in breaking down any of these tracks for more detailed analysis – doing so would not be any more enlightening for the long-term melodic rock buff. No amount of words makes up for hearing this release first hand, so it’s best to leave you with this thought: remember AOR how you always loved it? So do these guys…

Whether rockers, ballads, or the stuff in between, there are almost no weak points within this release’s twelve numbers – this collection of songs is very, very good indeed…and ‘Unbreakable’ is just superb. Most of you own at least three dozen albums that sound exactly like this…and a few dozen more that try so hard to sound like this but somehow miss the mark for whatever reason.  While there are truckloads of albums being released by European bands that (at best) just go through the motions in their attempts at creating old-school gold, it’s albums like this that remind you why you love(d) melodic rock. AOR albums this good are rare post-1992, but – like that Wigelius debut – when they appear, they’re a reminder of why you’ve always held on to that fading spark of hope.