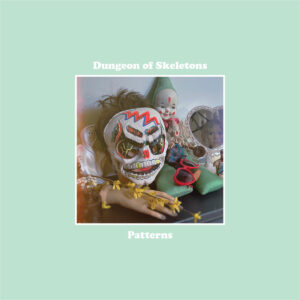 Since 2010, singer songwriter Justin Kline’s on-off recording career has taken in various different aspects of melodic pop and rock. His early solo releases explored a classic power pop sound; as frontman with the short-lived Origami Hologram, he ventured into a very retro world of alternative rock, before his return to solo work occasionally took him in a Weezer-ly direction.

All of those musical avenues had their own merits, but his Dungeon of Skeletons – a band that first appeared during the pandemic lockdown of 2021 – has the makings of his best work yet. Their thirteen track debut, ‘Patterns’, is rarely anything less than the gold standard in power pop.

Released as a single several months ahead of the album, ‘Gonna Be Alright’ gives a great insight into the band’s overall sound when a chiming riff collides with a soft, soaring vocal, setting up a mood that would’ve suited the much-missed Fountains of Wayne. It doesn’t especially push the power pop envelope, but it doesn’t need to; it’s familiarity is a great strength, and with Kline’s gentler vocal tones effortlessly contrasted with some strident riffs, and a great multi-layered chorus harmony, it creates a timeless power pop mood. A noisier lead guitar break which nods back to Origami Hologram ensures the melody doesn’t become too sugary, while another lead guitar part is used very effectively to compliment a great vocal. In short, if you’ve been a fan of Justin’s work before this, you’ll find an instant attraction. Every bit as strong, ‘Doom & Gloom’ supplies a buoyant McCartney-esque rhythm colliding with a soaring Brian Wilson-ish vocal. Again, the band’s core influences are fairly clear but always put to good use, and the more saccharine elements of the arrangement are bolstered by a great counter vocal and some hefty nods to 70s sunshine pop. The whole arrangement captures the perfect essence of power pop, but between a stabbed keyboard line, occasional siren-toned keyboard hooks and a genuinely floaty mood, the over-familiar will seem very inviting to genre fans.

The double whammy of ‘Song of Love/Sun & Moon’ shifts everything towards the maudlin with a slow melody at first, where crying vocals sit atop bell-like percussion, before a brilliant interlude where piano and flute accentuate the band’s love of all things early 70s. Bringing in a heavier drum sound for the second half allows Kline to slip back into some beloved McCartney influenced sounds, but the use of vocal reverb and an echoing rhythm guitar ensure this sounds very different. On first listen, this medley of ideas actually feels like one of the Skeletons’ lesser recordings, but time spent allows its subtler moods to work their magic, and for the layers within the arrangement to unveil something interesting once the melody becomes more familiar. On the surface, ‘Nobody Cares, Try Again’ appears to slunk back into the self-doubt of earlier works like ‘Doormat’ and ‘I’m Not What You Need’, but musically, it’s another strong workout with a fuzzy guitar and marching groove showing a massive love for Jellyfish. Sounding a little more like Roger Manning’s later project The Lickerish Quartet, this rocky take on a retro pop arrangement captures a great riff, offset by wordless harmonies and lead vocal where Kline’s light tones actually compliment the noisier elements of the music brilliantly. By the time you reach the latter part of the track where where a repetitive vocal hook fills space above a more sedate 70s rock rhythm, it’ll feel like something you’ve known forever…and chances are, once the final notes fade in a multi-layered a cappella haze (very clearly inspired by the ‘Pet Sounds’ and ‘Smile Sessions’ tapes from unmissable Beach Boys box sets), you’ll be hankering after that neglected copy of Kline’s ‘Triangle’ that’s likely lurking within your mountain of unfiled mp3s.

The title track presents acoustic riffs – from a Fountains of Wayne and Weezer stock – with a world of handclaps, harmonies and bell sounds, very much capturing the heart of the Skeletons’ stock sound in a very short mood lifter, whilst ‘Run Towards It’ sounds like a marriage between ‘Grand Prix’ era Teenage Fanclub and light 70s pop. In many ways, it’s little more than power pop 101, but it’s so well played, it doesn’t need to be flashy. With an uplifting vocal melody set against a pleasingly punchy drum part – which pays an effortless homage to some great 60s recordings from the Phil Spector stable with its strident sound – it’s got a heart that beats very strongly. ‘Daggers’, meanwhile, shows off more of Kline’s fondness for alternative rock when the distortion is turned up, the riffs take a slight shift towards melodic pop punk and the Skeletons set about cranking through a really fast paced arrangement. Beneath the noisier elements, of course, it’s business as usual: the vocals are finely layered with occasional male/female interplay, a second guitar soars gently beneath the jagged groove, and a wordless cry fills space against a Cars-like keyboard noise that’s used brilliantly to increase tension at the track’s climax. Eventually fading into avant garde piano noises before fading back in for a final round of Weezer derived clanging, the track bows out in a way that’s almost chaotic, and yet it makes perfect sense. It’s easy to imagine that, with the scope for a little improvisation, it would make a great closer for a live set.

Another lovely addition to the Skeletons’ catalogue, ‘Daydream Baby’ ventures into hazy pop, with a very strong influence from 1967, when a semi acoustic verse recalls light psychedelia, underscored with a Beatle-ish mellotron sound. It’s not just a quick and cheap homage, though; the track changes tack on the chorus when a semi-distorted guitar lends a riff some great weight, and a wall of distortion is used brilliantly to underscore a middle eight and climax in a way that suggests this pop-rock band could easily slide into a shoegaze mood at any moment. Tailing off with a heavily treated, echoing piano melody and unrelated drum groove, this cornucopia of sound almost pulls together everything within the Skeletons’ musical arsenal and wedges it into a rather busy four minutes.

There isn’t a point where this collection of songs loses focus, plays for time, or even simply tails off. Elsewhere on this brilliantly curated LP, you’ll find some Weezer inspired jangle (‘Valencia’), another spot-on homage to Teenage Fanclub that’s absolutely dripping with harmonies (‘Turn The Key’), and light singer songwriter fare with hints of dreampop (‘Tried & I Tried’), all of which help to paint a very full picture of the Skeletons’ varied talents.

Justin’s earlier work made no secret of his abilities as a songwriter, but this album captures several songs that are even stronger, more direct, and almost always show off a massive confidence. By combining all of Kline’s influences into one giant melodic package, this debut album from Dungeon of Skeletons isn’t just a great showcase for his writing; it’s also his most well rounded recording to date. With a great songwriter abetted by an equally cool and strong band of musicians, this is highly recommended.