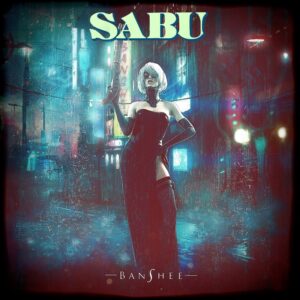 Paul Sabu has somewhat of a chequered past when it comes to melodic rock. For everything essential (Kidd Glove, ‘Heartbreak’), there are a couple of genuinely average albums, and more than occasionally, he’s been guilty of sullying his releases with some truly awful songs. Surely no-one ever heard his mid 90s track ‘The.. Babysitters’ and genuinely liked it? For some rock fans, the mental scars left by that song are deep. The thought of it can still trigger PTSD.

With that in mind, any work from Mr. Sabu – whether as a solo performer or member of a band – should always be approached with trepidation. Whenever a new album is announced, fans live in hope of something great, as per the Only Child LP from 1988, but they often stand more chance of Paul fobbing them off with cliché after cliché on a set of truly dated rockers that’ll be spun twice and shelved forever. 2022’s ‘Sabu’ – made in collaboration with ex-Malmsteen/Michael Schenker man Barry Sparks (not to be confused with Barry Stokes) – isn’t Paul’s worst work, at least song wise, but honestly, it isn’t very good.

At the start of the album, ‘Blinded Me’ sets the tone with a chunky mid paced rocker where chiming guitars collide with a fat bass. The manner in which a rocky verse slides into a melodic rock chorus is pure Sabu, easily recognisable as something from the man who gave the world ‘Angeline’, which appears to get things off to a reasonable start. As the track progresses, any promise soon fades, however; there are moments where a half decent melodic rock/metal track sounds like its keen to escape, but in the main, there’s very little genuine sparkle, whilst Paul belts his voice in a way that’s actually beyond his abilities. The title track works a strong keyboard part which sets up more false hope during another great intro, before everything descends into an unremarkable and somewhat stodgy rock workout. The chorus sounds massive, but if you pay any kind of attention, you’ll spot it being an over-stretched, under-thought one line hook with the vocalist already going through the motions. A cheeky guitar riff at the end of the chorus lifts the melody a little, but it isn’t until ‘Kandi’ slips into chunky ballad territory that things show any slight improvement. Driven by some solid guitar work, this number balances itself well between melodic metal and chunky AOR, and musically is a half decent reminder of Paul’s 90s output, with evidence of some solid writing abilities, even if the performance itself isn’t exactly top drawer stuff.

There isn’t anything within this trilogy of tunes that will surprise his die-hard fans, and a cheap production doesn’t always bring out the best in the playing. On ‘Kandi’, in particular, a potentially bright keyboard appears to be half buried in a demo-like mix, firmly suggesting that this album is a cheap product from a performer, now past his best. That’s a minor quibble in relation to Paul’s current vocal state, however. During the louder moments of these songs, he bellows incessantly, in a way that isn’t tuneful at all; what’s more, the material presents a voice that appears to be on the verge of collapse. At best, it could be called “gravelly”; at worst, he sounds like Sammy Hagar suffering with laryngitis and being intermittently stabbed with a taser. It’s pretty nasty, so presumably the record label are relying on his name to shift a few units rather than having genuine faith in his now fading talent, or even the recordings themselves.

When the music beefs itself up considerably, there are stronger glimmers of hope. Armed with a chunky groove and a brilliant bassline ‘Love Don’t Shatter’ makes it actually half believable that Paul might still be able to pull himself up to something resembling his mid 90s self (you should accept that his Kidd Glove level of talent has long, long departed), but even then, a few longer notes are obviously beyond him. Better yet, the driving melodic metal of ‘Rock’ is furious enough to disguise the bulk of Paul’s shortcomings, and has so much energy that the listener instantly becomes fixated on a guitar part that blends some of Sabu’s previous hard rockers with the guts of Keel. Lyrically, it’s all pretty silly, of course, with warnings of “if you feel like a rat, move the trap” and “if you think you’ve got the blues, pay your dues” propping up an overblown performance, but it’s just about spirited enough to win on riffs alone. A second attempt at a melodic metal banger, ‘Rock The House’ fares less well in its bid for “The Keel Revival Cup”, but a really energised riff might just be enough to win over fans of the style, even though Paul’s over-zealous vocal and some pretty obvious clichés have the potential to grate pretty quickly.

‘Turn The Radio On’, meanwhile, casts a spotlight on a mid tempo rocker that sounds like a direct throwback to the ‘In Dreams’ album and material like ‘Arms of A Hangman’. With a chunky verse used as opening bait, it’s definitely reminiscent of some of Paul’s superior work, and even the lower registers of his voice are more in keeping with older material, suggesting that this album might just offer something else worth hearing. However, it all falls apart when the chorus rolls around; slightly harder riffs ensure Paul pushes his voice a little more and, as before, he proves incapable of holding any longer notes, whilst a one line chorus reaches maximum tedium in record time. Likewise, ‘Skin To Skin’ offers a great riff, a massive AOR chorus and a flicker of classic Sabu at its heart, and musically, suggests that this union between him and Sparks had potential, but a wobbly vocal makes a familiar melodic rock hook feel too much like a rough and ready demo. With no real attempt made to lift the number with a strong middle eight or (predictable) key change, it’s actually a chore to listen to more than twice.

The only track that genuinely stands out in the long term is ‘Midnight Road To Madness’, a decent rocker that – vocals aside – could slot among the better moments of ‘Heartbreak’ with its solid combo of chiming guitars, gruff exterior and massive AOR hook. Although firmly cast in a 1989 mould where melodic rock tropes started to gain a chunkier heart, it’s here that Paul sounds genuinely comfortable. Better late than never, fans will encounter him crying against a massive gang vocal on the chorus, and even managing to croon with relative effect on a melodic verse. Sequenced near the end of the album (track ten of eleven), though, it’s a case of too little, too late: most listeners will have probably long given up on this disc by this point.

Tracks like ‘Skin To Skin’ and ‘Midnight Road To Madness’ show how Sabu’s best writing chops can still present themselves on occasion, and ‘Rock’ adds a fun but very dated slab of metal to this album, but in all honesty, there’s nothing on ‘Banshee’ that’s genuinely strong enough to recommend it. It’s possible that even some of his bigger fans will find most of his vocals hard going in their present state. There’s nothing here quite as bad as ‘The Babysitters’, but that’s damning this record with faint praise. The fact is, two or three passable songs and one genuinely good track just doesn’t cut it. Even when it comes to much-loved veteran performers, goodwill will only go so far…