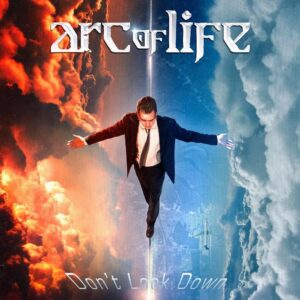 An impressive side project for Yes men Billy Sherwood (bass/vocals) and Jon Davison (vocals), Arc of Life formed during the pandemic lockdown of 2020. Using the new band as a vehicle to combine strong melodic structures with some classic prog expansiveness on occasion, the band would quickly make an impression among Sherwood’s many fans. With the presence of Pink Floyd obsessive Dave Kerzner on keys, Sherwood’s old World Trade mate Jay Schellen on drums and his Circa colleague Jimmy Haun on guitar, the band would quickly take on the mantle of “old friends together”, but for lovers of melodic prog rock, their self titled debut LP (released in February 2021) presented a great blend of musicianship and song-based ideas.

In terms of follow up albums, 2022’s ‘Don’t Look Down’ does far more than offer much more of the same. There are a few numbers that latch upon Sherwood and Davison’s hook laden tendencies, but on this second outing, the band have been utterly unafraid to indulge in their love of epic sounds, which will certainly please the more prog minded listener.

‘Real Time World’ kicks off the album with a few sharp riffs and stops that call back to Yes’ ‘Tormato’ album – and specifically the tones of ‘On The Silent Wings of Freedom’ – before sliding into a terrific prog/art pop melody where Sherwood’s bass work appears to channel the ghosts of Chris Squire, and Davison hits upon a terrific high tenor vocal. Moving through the verse, there’s a little more focus on mood than a genuine hook, but by two minutes in, the whole band hits upon a great groove. Sherwood’s bass remains in the driving seat, but Kerzner’s application of some very Tony Kaye like keys and Haun’s chopping guitars flesh out a great sound. By the third verse – and an increase in tempo – the number sounds like a call back to some of World Trade’s more experimental sounds, by which time, lovers of the style should be in their element. That would be enough to secure its place as a great opener, but more time given to Davison for a strong, ethereal tone during a lengthy mid section, a rigid beat and sitar combo, and a world of shimmering guitar make a great piece even better, before a new age keyboard backdrop and a shameless homage to one of Jon Anderson’s late 70s melodies creates an effective climax. …Or at least it would, if the band had recognised a very natural end. Instead, they opt for another outing of the very World Trade-centric verse which, in some ways, this feels a little surplus to requirements; in others, it ensures the number finishes with a familiar melody – and as before, melody is something that Arc of Life are very keen to promote here.

At the album’s most accessible, the title cut brings out a world of multi-tracked harmonies that immediately sound like Arc of Life stepping in on an old World Trade recording, before branching off into some finely tuned pop/rock/AOR where Sherwood’s bass floats above a soft blanket of keys, and Haun drops into some terrific soaring guitar. During a very slow verse, the rhythm feels a little stilted at first, but after time to attune, the huge World Trade vibe takes over in a way that it’s impossible not to love, and when Haun eventually steps up to the plate with a solo that sounds like he’s channelled the best bits of Jeff Beck and David Gilmour circa 1988, the retro sounds from Arc of Life take on a much more confident approach. Similarly commercial in places, ‘Let Live’ blends an obvious World Trade heart with a much harder rhythm in a few places – Schellen’s drums punch through the opening verse with an impressive clout – whilst drifting into floaty new age melodies in others. There are times when Sherwood’s heavily filtered voice becomes a little too cloying, but musically, the band are pin sharp, with Billy’s bass and Jay’s drums locked into a union that only comes via years of playing together, and Kerzner taking a rare opportunity to drop in with a squirly solo in the vein of Geoff Downes circa 1980. There isn’t much of a chorus hook, unfortunately, but everything else more than makes up for that, with a whole world of atmospheric guitar work and crisp bass grooves supplying a real heart during the number’s second half, in a way that should appeal to fans of Yes circa ‘Talk’ and ‘The Ladder’.

‘All Things Considered’ works some rather buoyant pop-rock, with Sherwood tapping into a brilliant funk inflected bassline. Between that and Davison’s ethereal voice, the World Trade sound comes through in massive waves, and hearing Kerzner’s keys weaving in and out of the techy AOR groove, you might think he’s about to take centre stage, but the track’s biggest chops are left in the hands of Haun, who chooses some really angular Fripp-inspired noises to offset the AOR moods. It’s here that Arc of Life’s push and pull between AOR, light rock and obvious prog really explodes in the most appealing way: the slightly spikier elements of the music always draw in the ear, and the harmonies shared between Jon and Billy, although multi-tracked and subjected to some studio trickery, present some of the album’s best.

In a change of mood, an acoustic guitar sits at the heart of ‘Colours Come Alive’ as Davison takes more of a new age approach to a vocal melody. Weaving his stronger sounds in and out of the bass, there’s another obvious Yes mood taking shape, but it’s not by any means a quick knock-off. As before, the slower rhythms supplied by Schellen and some of the vocals take on more of a World Trade sound, and when hitting the main hook, Kerzner’s keys keep everything light with a bright sound lifting beyond obvious old prog tropes. Looking at the different elements pulling together, it definitely showcases Arc of Life at their most appealing: the spacious music gives Davison more room to soar and although he never overplays anything, Haun’s occasional nods to Steve Howe (in the vein of material like ‘To Be Over’) are just lovely.

Almost as if to appease those idiots who judged the previous Yes LP ‘The Quest’ on its lack of long tracks, the album closer ‘Arc of Life’ clocks up an impressive eighteen minutes, which would obviously take up the whole of side two, had this been a vinyl release. Obviously, those who were critical of the last Yes release probably aren’t likely to approach this with a keen ear, but there’s no denying that Sherwood’s desires to stretch out have peaked here – and certainly been inspired by playing a few epics on previous tours. At the outset, robotic voices hint at a love of Yes circa ‘Big Generator’ and bring back strong memories of the World Trade debut whilst Sherwood pumps a strong bass. Moving into the verse, slight Rush vibes underscore some more very Sherwood driven musical ideas, until a busy vocal takes centre stage. The mix of prog and techy AOR captures the very essence of Arc’s desire for prog and melody to co-exist, and the extra colour supplied by Haun and Kerzner is quirky without any self-indulgence. There are passages where soaring guitar sits atop busy bass, and more Yes-isms lead into a slow rhythm pumped by bass and weird sitar-like sounds, the band slowly descend further into their own musical universe, but never in a way that feels too alienating for those who love a strong melody. At the heart of the track, the interplay between Sherwood’s loud lead bass and Haun’s haunting guitar becomes everything when a Floyd meets Yes mood encompasses the musicians, before Davison drops in with another new age melody that, in this instance, doesn’t quite fit…and yet seems somehow perfect for the slightly detached mood that’s taken over. Eventually, via a droning keyboard, various voices that sound as if they’re coming from the other end of the telephone wire, some heavily rhythmic bass sounds and Yes derived vocals, the band finally find their way back to world of melody, and closing this long journey a superb vocal hook (“the arc of life, perfect synchronisation”) draws a strong influence from various steps along Sherwood’s long musical journey, making this feel like immediate family. A genuine tour de force, each of the musicians is given the opportunity to shine here, as Arc of Life attempt to reach out to the more demanding section of prog rock fandom. There’s a lot to love, yet at the same time, there are moments where a couple of great ideas might have fared better within something more succinct. Nevertheless, it’s the kind of track that promises something interesting – and potentially different – on each successive listen, which in some ways makes it Arc of Life’s ultimate achievement.

By and large, this is a great album. There will be times when the longer form of ‘Arc of Life’ mightn’t fit the mood, but when looking for a classic prog deep dive, there’ll be days when it really hits the spot, along with the rest of the material. For the Billy Sherwood fan, this collection of tunes has the potential to become a firm favourite fairly quickly, since here are moments where his bass and vocals feel like an old, familiar friend on performances that show how – even this far into his career – he still aims to push forward. Almost as if designed as a companion to ‘The Quest’, there’s also plenty here for the more open minded Yes fan to explore; although isn’t always as accessible as the Arc of Life debut, it offers a truckload of musical gold for the proggy minded, and just enough big harmonies for the more adventurous melodic rock buff. Whichever way you approach it, you’ll find something interesting…and strangely familiar.

Buy the album: ARC OF LIFE