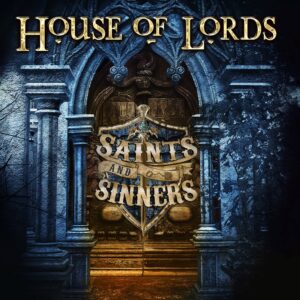 Their thirteenth studio album, ‘Saints And Sinners’ pairs James Christian with guitarist Jimi Bell – by now celebrating his sixteenth year with House of Lords – and their union continues to give the now veteran band a solid heart. Adding something extra this time around, the addition of the legendary Mark Mangold (of Touch/American Tears fame) on keys gives most of the material a bigger feel than before. The album’s eleven tracks don’t necessarily break the mould, but a case could certainly be made for it being the strongest House of Lords work overall since 2014’s ‘Precious Metal’.

The title cut kicks things off with a great uptempo rocker whereby, even before the intro is even over, Bell pushes forth with a superb multi-layered guitar sound and Mangold brings up the rear with one of the pompiest keyboard sounds on a HOL recording in a long while. The verse brings more of a melodic edge, very much allowing Christian to find a space in which to unleash a full cry, before a harmonious chorus taps into some strong but by numbers melodic rock where vocal harmonies reign. Even with a barrage of whoahs in place that could be a throwback to an old Ten album, it’s easily recognisable as House of Lords – and even more so when Mark launches into a brief but relentless keyboard break. By the time the chorus drives everything home one last time, it feels like the kind of track you’ve known forever. This is not so much a criticism, as a feeling that you’re in safe hands.

Things then take a small wobble when ‘House of The Lord’ mismatches a grand, sweeping piano part with a semi-busy, almost militaristic drum part. It sounds like two different songs being played at once, but eventually settles into a really punchy rocker that pushes Christian to the fore. The way he curls his pomp-edged voice against Bell’s guitar – at this point, deeply immersed in some really strong, jagged melodic metal – offers a sound that’s confident, but the track really comes into its own when a chorus turns everything around with huge soaring AOR that could have easily fit anywhere on the previous couple of albums. The harder edges are enough to ensure that HOL don’t just sound as if they’re going through the motions, and Bell’s featured solo is constructed from some superb high octane fretwork, but for those keeping a closer ear, a few of Mark’s squirly keys might just steal the show.

Moving through ‘Take It All’ – a by numbers AOR workout where James and company sound as if they’re reworking a lesser Desmond Child number, augmented by a few unwelcome vocal filters – and into ‘Road Warrior’, things aren’t quite as interesting, but at least with the latter, the general punch of this new line up comes through via some rollocking rhythms and a killer keyboard sound pulled straight from the 70s. Fans of Bell’s guitar work might find it disappointing that he’s taking more of a backseat to the voice and keys, but the sheer drive and pomp in the arrangement sees everything through until Mangold goes full Don Airey, thus encouraging the band to call further back into their pomp-heavy past. ‘Dreamin’ It All’ gives the album another great melodic rocker where the harmonies are huge, and Johan Koleberg’s drums give the groove more of a punch than before. A few heavier, dirtier riffs from Bell end up taking everything more in the direction of Dokken circa 2012, but there’s enough energy and melody to please a large cross section of melodic metal fans, before the track peaks by revisiting the main hook before driving the riff home with another round of very 70s keys. A few plays will be enough for this to become a favourite – it’s prime twenty first century House of Lords.

Keeping with the chunky sound but slowing down, ‘Takin’ My Heart Back’ isn’t shy in flaunting a few dirtier sounds once again, but as before, Bell’s meaty sound works brilliantly against Mangold’s retro organ, and Christian sounds incredibly comfortable tackling a melody that hints at the heavier end of Kiss, whilst remaining resolutely HOL. Fans will own a lot of material that sounds like this – not just from James and company – but that won’t stop it being thoroughly enjoyable when the mood is right, and there’s plenty within Bell’s performance that lifts it above a phoned in rocker. This is especially obvious when it comes to his featured solo, during which he fills several bars with semi-bluesy string-bending flurries, played with a fine 80s metal tone in a way that would’ve fit Lanny Cordola just as well back in the day.

Those hoping for a big ballad – and no melodic rock album is complete without one – will certainly be pleased by the stately piano that supplies the heart of ‘Avalance’, creating something a little more thoughtful than most. Mangold’s natural style shines through at every turn, and James clearly welcomes the spacious arrangement, using it to reach for some of his biggest notes this time out. A little more theatrical than “Diane Warren Tribute #305”, it somehow manages to stay within the album’s flow, despite coming closer to some of Jim Peterik’s more fanciful affairs. At the other end of the scale, a bunch of cheesy, tossed off rhyming lyrics could’ve rendered ‘Razzle Dazzle’ a dud, but it says so much about the confidence within this HOL line up that the band somehow make a trashy rock ‘n’ roller sound like a genuine crowd pleaser. At first, you might wonder what it is that makes it work, despite itself. Perhaps it’s the deep bass grumble that’s obviously lending the arrangement genuine power, or Bell’s ferocious lead work, offering more great tones. Eventually, the penny drops: it’s the huge, slightly shrieky gang vocals that, above all else, advertise a party spirit in the most glam-oriented fashion. Somebody has clearly taken influence – either deliberately or subconsciously – from Sweet. This distant cousin to bangers like ‘Action’, ‘The Six Teens’ and ‘Fox On The Run’ is about as far removed from typical House of Lords as you’ll find, and yet…it’s somehow very gratifying. In a world that often takes itself too seriously, this knockabout rocker really helps this album to feel very well rounded.

Granted, the production doesn’t make the band sound quite as lavish as those formative major label LPs, but James still holds a presence vocally, Bell’s mastery of a riff is almost always clear, and a handful of brilliant choruses are reminder enough that this is a melodic rock act that can still pack a punch. Having Mark Mangold on board is certainly a major plus, too. ‘Saints And Sinners’ brings classic rock home in a tried and tested way, but maintains enough flair to keep fans entertained. Back in 2004, few would’ve believed that House of Lords would still be a going concern some eighteen years later, but It’s fair to say that if you’ve picked up any – or all – of the band’s albums since the reformation, there’s plenty to enjoy here.

Buy the album here: HOUSE OF LORDS – Saints And Sinners