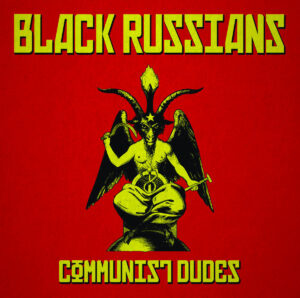 At the end of 2020, Black Russians issued a selection of new tracks as part of a split with US horror punks, The Jasons. The “Soviet Punk Rock” band might not have been the bigger name, but their material ran rings around the American act, showing a musical tightness and a humour that fit their chosen genre perfectly. A couple of years down the line, their full length ‘Communist Dudes’ makes good on the promise of those earlier tracks, delivering thirteen Ramones influenced bangers, dealing with topics such as satanism, communism, and an iron curtain winter. Armed with massive riffs and played with tongues firmly in cheek, aside from an obviously DIY production sound, it’s almost everything genre fans could hope for.

‘Nuke The Moon’ opens the record with an aggressive Ramonescore riff overlaid with a clean lead guitar throwing out descending notes, before throwing itself head first into something Screeching Weasel-esque, where an aggressive rhythm guitar battles against a deep rattling bass. Musically, it’s superb. A gravel-edged vocal is the sort of thing that’ll divide opinion, but the band use the limited tone very effectively when applying it to a very aggressive strain of a familiar sound. ‘Black Death’ takes the tautly wound Ramones influence and drops something more intense, where great bass work pushes against a wall of guitars. A repetitious hook of “The black death / The black death / Now it’s ready” seems a little over simplistic, but given the music in hand and the pace it is delivered, this direct, almost sloganeering approach genuinely works well for the band, and for lovers of the style, it’s likely to create the most rough and ready of earworms along the way. ‘Phantom Cosmonaughts’, meanwhile, blends peak Screeching Weasel with the brilliant Euro punk of The Apers to bring a barrage of riffs that tap into some superb punk. In lots of ways, it’s Black Russians by numbers and the kind of sharp ended punk-pop stock that could be seen as generic, but lot of attitude and another direct hook means it’s set to become an instant favourite among fans.

Taking their punk core and adding a couple more melodic touches through a slightly cleaner guitar sound, ‘Russian Sleep’ takes Ramonescore into a world where twin guitars hint at an unexpected melodic metal influence, while a scratchy vocal keeps everything rooted firmly within the expected punk. Armed with a brilliant chorus that sounds more like The Radio Buzzkills than typical Black Russians, this gives the album a little more variety, even before an 80s metal guitar solo derails everything with a trashy sense of bravado. ‘Communist Dudes’ opts for something a little more punk-pop, loaded with handclaps and massive “whoahs”, but at its heart, there’s still plenty that’s trademark Russians, from its huge chorus, buzzsaw riffs and simple humour. On this track, the “communist dudes with nothin’ to fuckin’ lose” not only nail their brand of punk, but also suggest that – repetitious or otherwise – their sound still has plenty of mileage. For purer Ramones love, ‘Dyastev Pass’ is an instant classic, since it brazenly takes cues from at least three tunes from Joey and Johnny’s debut. It isn’t a straight rip, though, as a few slower power chords shake things up along the way, and a couple of considered harmonies lift the number beyond the Russians usual knockabout fun, making it an album highlight.

Cranking the speed, ‘We’re Only In It For The Blood’ occasionally sounds like a tribute to the faster aspects of The Queers (circa ‘Beat Off’), and really shows off how tight this band can be, before throwing in some welcome “whoahs” to stoke up both the accessibility factor and the necessary catchiness. Elsewhere, a heavier bass sound drives the brilliant ‘Pentagram of Fire’, a pure punk belter where gruff lead vocals are contrasted by wordless gang vocals on a chorus, before the usual Ramones inspired riff is interjected with a welcome heavier interlude, and the gang vocals driving ‘Winter’ provide some much welcomed trashy fun, helped no end by another round of riffs on loan from a couple of old Lookout! Records bands. If nothing else, the repeated refrain of “hey motherfucker…it’s wintertime!” is sure to stick.

The only time things take a massive misstep is during ‘Break You’, where the band slows down to tease their audience with a Phil Spector inspired bubblegum punk workout. Musically, everything’s on a par with the rest of the record: an overdriven guitar handles the mid tempo chug brilliantly, and an old style metal-infused lead guitar adds a real cheekiness to the familiar sound, but the vocals – still clinging onto their usual gruffness – are a genuine mismatch, and some gloriously out of tune backups suggest that Black Russians are out of their depth – or more likely just taking the piss.

The self proclaimed “Most Powerful Force In The Universe” really aren’t messing around when it comes to full on punk thrills here. With most tracks having been tightly arranged and sent off with a knowing wink, this is classic Ramonescore the way you’ve always loved it. If you haven’t been aware of the Black Russians’ work before, this is a fine entry point. For fans of Ramones, Screeching Weasel, The New Rochelles and The Jasons, it’ll be nothing new, but entertainment is still pretty much guaranteed.