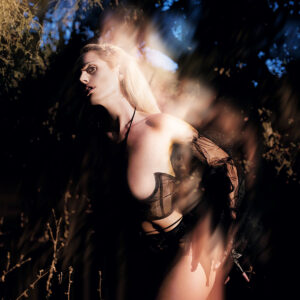 This three track release from Draagyn isn’t shy in taking gothic infused metal into some interesting places. There are musical elements that are very recognisable from her 2019 digital single ‘Majesty’ (namely, bursts of classic sounding black metal) and the tech/prog metal riffs from 2020’s ‘A Night Between Two Days’ still maintain a strong presence, but there’s also a desire to throw in a few more commercial riffs and contrast those with something even more extreme at times. It’s fair to say that the composer’s hand now seems much stronger. It isn’t necessarily a question of confidence, but rather more a greater acceptance of creative freedom; of knowing when to cast aside any perceived boundaries and when to pull back, and throughout ‘Bent Rib’, Draagyn uses that to her advantage, even though it sometimes results in sounds that are challenging.

The EP’s most accessible track, ‘Beating Heart Cadaver’ opens with a dark toned guitar throwing out a chiming riff, under which massive doomy chords echo ‘Black Sabbath’ by Black Sabbath, reinforcing a classic style. Descending keyboard riffs lend a carnival vibe and hint at a love of arty metal fare from Stolen Babies, before settling into a semi-gothic melody that allows a clean vocal to rise up and sing out with a haunting beauty. The melody continues in a very safe fashion, until deciding to switch to a quickened tempo, driven by rattling drums, whispered tones and buzzing riffs, giving a goth metal core an unexpected semi-punky energy. Eventually adding a few black metal rasps and a mournful melody via something that sounds like a broken piano, Draagyn begins to hint that not everything within her world will always be as linear, and true enough, ‘Appetite of Man’ takes the gothic and expands upon it in a very pleasing way by adding a much dirtier guitar tone throughout. A hard chugging riff becomes a solid backdrop for haunting, siren-like lead guitars and strangely spooked out vocals that sometimes sound influenced by Hole, and sometimes drop into a disquieting black metal rasp. The arrangement relies more on riffs than vocal hooks – especially by the mid point, where classic doom metal is challenged by atonal dark riffs – but as with ‘Beating Heart Cadaver’, there’s still enough room for a huge melodic cry to cut through, giving the more extreme aspects a semi-commercial counterpoint. With a soundtrack-like interlude full of synthesized drones evoking mellotron noise, and a theatrical sadness within the second half, it certainly doesn’t care for the obvious or linear, but everything here works brilliantly. Eventually arriving at a quasi-bluesy guitar solo where howling notes are joined by stately piano, it gives the feeling that Draagyn’s self-created world carries a strange beauty within its unashamed darkness.

The title track outshines everything else here by presenting a strange concoction of heavy rock that draws from funereal gothic riffs, places those beneath the kind of leaden drums you’d find on a typical sludge metal workout and, accentuating the unease further, adds a strange Kurt Weill-esque clankiness. And that’s just for the opening couple of verses. By the time the track actually thinks about a sensible hook, the music explodes into a grandiose yet more commercial brand of light goth that’s sort of a distant cousin to Lacuna Coil. Draagyn’s clear and melodic vocals really soar, and the melody itself conveys a brilliantly late 90s charm. That would be enough to sustain a very strong four minutes, but Draagyn has other ideas, and the tune is occasionally derailed by the kind of sharp edged histrionics that would please Buckethead on one of his semi-accessible days, a few bursts of vocal anger that veers off into a black metal sphere, and – for good measure – several bars of classic thrash that could’ve been inspired by peak Megadeth. The phrase “kitchen sink” may be overused, but here, it’s entirely relevant. Seemingly anything Draagyn has felt like chucking in has been considered fair game, but the fact that she’s done so without anything feeling messy is genuinely impressive.

If you’re the kind of person who thinks metal – and even the artier end of the metallic spectrum – has become predictable, then Draagyn might be able to convince you otherwise. The title track from this release this needs to be heard as soon as possible. Yes, individually, many of the influences are clear, but the way Draagyn uses them is more interesting than most, and the way she twists music into different shapes at will even after a few bars will certainly keep listeners on their toes. Hard, thrashy, obtuse, extreme, dark, strangely beautiful: all bases covered for a really interesting fifteen minute trawl through an imaginative soundscape that will inspire as much as entertain. Recommended.