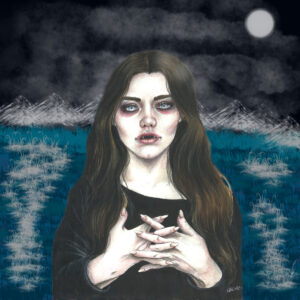 A one man project from Italy, Scurìu set out to convey the darkest musical interests of its creator. An early demo released during the pandemic lockdown of 2020 introduced a small group of listeners to a sound that blended classic doom metal with traces of black metal harshness, and a vocal that almost seemed to channel Love Among Freaks’ ‘Berzerker’. If it weren’t for the presence of some great riffs and atmospheric spoken word passages, it might have even sounded like a comical pastiche of the extreme subgenres, but somehow – despite a wilfully lacking budget, truly home grown stance, and lack of actual songs – the recordings had something about them that pulled in the listener. It says a lot about how durable Cathedral-esque riffs can be, and how extreme metal’s insular and sometimes truly claustrophobic feel will hold up against less than ideal recording circumstances.

Via a relatively daring contribution to a collaborative project from Carcerem Lupi Underground Resistance in 2021, Scurìu branched out into even grander ideas, and his 2022 EP ‘Wilhelmina’ is more than a collection of musical sketches, songs and ideas: it’s a complete extreme metal suite, designed to be approached in one immersive listening experience.

As you might expect, that creates a somewhat brave work; one that never gives any concession towards supplying an easy ride. Its five pieces start somewhere very dark, before heading somewhere darker still, but if you’re somehow able to make it past a largely abrasive musical approach, it leaves a soundscape that has the potential to interest those who are keen on the doomier end of things and a more epic approach to the extreme. ‘Wilhelmina I’ leads off with a minimalist piece where sweeping piano melodies call back to various linking pieces from classic Type O Negative works, whilst a spoken narrative really cranks up a feeling of unease. It isn’t especially original, but there’s something very appealing about its simplicity, and an unexpected shift into an unsettling carnival waltz really sets up an idea that Scurìu is about to lead his listeners somewhere genuinely scary. …And true enough, ‘Wilhelmina II’ introduces a slow, oppressive waltz constructed from doom metal guitar tones, drawing more heavily from a sense of unease. Actually a variation on the first movement of Beethoven’s ‘Moonlight Sonata’, when played in a funereal style it works brilliantly as a backdrop for a growling black metal vocal, clinging on to an incredible tension throughout. What it doesn’t supply, of course, is anything especially hooky. The slow pacing seems to get slower as things progress, and the sheer weight of the vocal adds an intensity that some will find very difficult to endure. Nevertheless, there’s plenty within this extreme doom/death/black metal hybrid that works, from a deftly executed harmonic guitar part filling parts of the middle section, through a timeless doomy, overdriven guitar sound acting as a perfect compliment, and a climax where these elements seem to grow even more. Naturally, the instrumental parts are far preferable to those dominated by husky vocals, and for those who crave their riffs to take on the mantle of a Sabbath played at half speed, or a Spacebeast stretching from the sludgy into the vast expanses of funeral doom, it’s a piece of heaviness that’s sure to hit the spot.

‘Wilhelmina III’ continues the heavy and dark onslaught, firstly by wheeling out a brilliantly mournful riff against a slow beat, allowing multi-layered guitars to accentuate a funereal feel. In many ways, this represents the very heart of the Scurìu sound; it’s heavy without being too overbearing, whilst clinging on to a classic doom core. An interesting twist comes via an acoustic accompaniment, and a slight Spanish lilt within the melody hints – probably not intentionally – to the film score for Jose Larraz’s 1978 cult flick ‘The Coming of Sin’. Although brief, it provides a crucial function in showing how the Scurìu sound can shift from the predictable, but it isn’t long before the heavier sounds of a doomy riff and melodic death vocal dominate once more. There’s a lot about the outcome that’s purely for genre fans only, but in terms of the playing and its DIY sense of scale, it’s brilliant. With ‘Wilhelmina IV’ moving through an even slower tempo, and its concession to clean notes used purely for unease, it quickly becomes the release’s most intense workout. It’s barely a few bars in before its heaviest elements are presented, and a death metal growl goes an extra mile in creating a frightening experience for those who’ve made it thus far. In genre terms, listeners shouldn’t expect any major surprises – this really is just an unrelenting slab of doom/melodic death, played very much to type. It would be hard to argue against its merits in doing so; the riffs are absolutely unshakable and the vocals are hugely atmospheric for the style. In terms of pure doom, Scurìu has truly peaked. The fifth and final part of this musical journey is no more than a brief coda, but it plays an important part in allowing the listener time to wind down, A gothic church organ reworking a theme that could easily have been derived from an old 1930’s horror film takes centre stage here, and it isn’t flashy, but in so many ways it encapsulates Scurìu’s overall vision in a perfect and simple musical sketch.

Overall, ‘Wihelmena’ is a meandering slab of intensive riffing that hints at “concept”, but without the aid of a lyric sheet, any of the actual narrative details are in danger of being lost upon the listener. It’s much better approached as a slab of “epic doom noise”, a remit the EP achieves more than admirably, even with some obviously DIY aspects at play. It really won’t convince anyone who isn’t already deeply immersed within the extreme subgenres of metal being explored, but to expect it to – even remotely – would be very much missing the point.