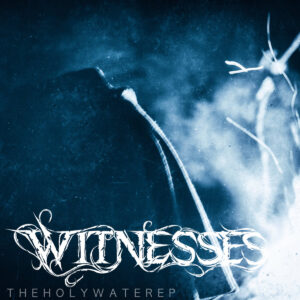 Essentially a vehicle for multi-instrumentalist Greg Schwan, this EP from Witnesses takes goth and doom metal traits and applies them to a cohesive narrative based around the lives of characters found within the text of Bram Stoker’s ‘Dracula’. An obvious subject matter for a gothic metal band, yes, but the way Schwan and his assorted friends present their material very much shows that the tried and tested – whether musically or lyrically – need not feel too stale.

Two extended workouts allow the listener plenty of time to immerse themselves into the Witnesses’ world, and during ‘Borgo Pass’, especially, there’s a world of intensive riffs that conjure the ultimate in misery. In fact, the deathly slow approach of the main riff could easily be one of the most funereal things ever – it’s certainly one of the slowest to emerge since Byzanthian Neckbeard released their ‘Extinction’ EP in 2019. Although it isn’t as heavy as that, its pacing and overdriven tones certainly make it seem fairly unrelenting, albeit in a good way. It’s fair to say, in terms of pure doom, it hits everything square on. Luckily, the heaviness is contrasted by a great, clean vocal, and Gabbi Coenen delivers a haunting narrative in a light and almost ethereal way. Her voice has such a fragility and purity, it almost gets lost at times, but it’s still easy to hear why Schwan has set up such opposing musical elements. After a very intensive three minutes, its all change when Schwan introduces various semi-acoustic elements to weave in a cold, folky melody. This, again, taps into the gothic, but in a very different style. Furthermore, it allows the listener to appreciate his playing in a much broader sense, whilst a droning e-bow sound adds plenty of atmosphere. Eventually returning to heavier climes via a slow, oppressive riff that’s as much about the spaces between the noise, Witnesses’ intensities seem particularly assured. As before, Gabbi offers a lovely counterpoint, and her soft voice gives the more discerning listener everything that’s needed to make the performance work. Finally, adding a strange and haunting melody to something almost dark and bluesy, Witnesses whip up the ultimate in gothic sounds, as Gabbi offers herself as “a voice for the meek” and someone with “sharpened nails, in the hope that we meet”. It’s all very oppressive and scary, but never in the typically visceral way that’s often at the heart of extreme metal. For lovers of classic doom, it’s a must hear.

Emerging from a howling wind, ‘Cloistered In Purfleet’ weaves a quiet – and disquieting – drone, over which Gabbi allows her hushed voice to move gently. The immediate feeling is one of a haunting beauty – a blend of the sadly departed Julee Cruise and the echoing darkness of a prog metal band’s more experimental side. Bringing in a slow, slightly lumbering rhythm, the music takes shape with faint traces of bands like Cult of Luna underscoring an occasionally heavy crunch that’s recognisable as being Witnesses. Somewhere around the middle of the second verse, the unwavering gothic sound begins to feel like something you’ve known forever, and with a gradual increase in crushing guitar sounds and doom-laden keys, the number grows into a fairly traditional but impressive goth metal workout, where multi-tracked vocals unveil a brilliant climax. It isn’t melodic enough to win over the more casual listener, but the way the clean vocals are used in conjunction with extreme heaviness is very cool.

Presented as a coda, ‘The Ballad of Lucy & Mina’ ties together the EPs themes via a very short acoustic workout. Hard strummed guitars lay the foundations of a strong melody, while fingerpicked elements add a complex counterpoint, almost as if Mike Oldfield has approached an introduction from Metallica’s ‘…And Justice For All…’ Its brief nature is such that it isn’t really a selling point for the EP as a whole, but in extending gothic themes while showing a completely different side to Witnesses, it’s an effective way to bow out.

‘The Holy Water’ is a slab of music that, in some ways, seems to always be at war with itself: it’s short, yet somehow expansive and epic; it’s dense, but never depressing; heavy, yet at times, strangely beautiful. It really shows how doom needn’t just be constructed from obvious Sabbath-isms, and can still be effective…and affecting. For doom lovers everywhere, it’s a release that should be investigated as soon as possible.