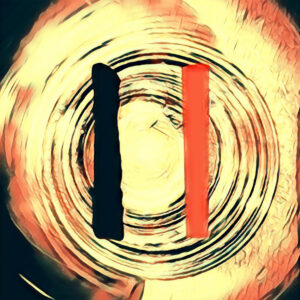 Following on from their ‘Let You Down’ single in 2021, Belgian rock band Bar II’s ‘How I Fake It’ EP features a couple of their best recordings to date. Its two tracks are centred around some fairly chunky riffs, but despite being promoted as a “stoner duo”, the best moments branch off into an even spikier sound, often showcasing the musicians in a more inventive way.

‘Fake It’ opens with an angular guitar riff underscored by chiming sounds and a clattering rhythm. It takes about four seconds before it asserts a hard edged sound that carries traces of both Royal Blood and The Black Keys, but things take a left turn into something more distinctive via a great verse where semi-bluesy vocals collide with jagged, arty riffs. For those who love a melodic approach to an alternative sound, this will be more than enough to latch on to, especially with a semi-clean vocal in the driving seat. However, a shift into a big chorus brings a few unexpected harmonies and a greater sense of melody, giving a track that once seemed dominated by riffs a more than reasonable hook. A second verse taking the same approach cements a solid track, before a slightly heavier breakdown applies an almost industrial edge to a much darker riff, bringing everything to a close with a pleasing amount of force.

More melodic, and by turn a little more predictable, ‘How I Feel’ kicks off with a deep riff that immediately suggests an even bigger influence from hit makers Royal Blood. Slow and mechanical with a grinding bass sound providing the heart, the presented groove invites a steady head-nodding response, but Bar II are quickly able to take the expected and morph it into something a little more of their own. As the tune progresses, the marriage of deep bass grooves and percussion lines cements a great rhythm, whilst a fast, almost garage rock-ish chorus brings forth some extra fuzz, before a belated introduction of a completely different melody adds some noisy indie fare. For something that barely clocks up four minutes, it’s a bit of kitchen sink arrangement, but thanks to at least two very strong hooks, it’s hugely appealing from a musical perspective.

This might be short, but it’s also quite brilliant. Within this very direct two track package, it’s impossible to ignore the quality of its busiest riffs and most angular grooves. For fans of Royal Blood, ‘Humbug’ era Arctic Monkeys and even Band of Skulls, this should be considered an essential download. By counterbalancing some massively sharp ideas with a relatively radio friendly approach, Bar II sound like a band poised for the big time.