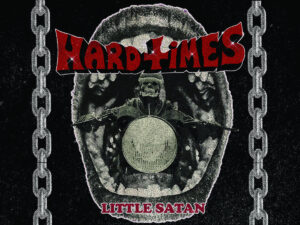 Coming out of a pandemic lockdown and determined to make some noise, five guys from Europe hit upon a new musical idea. Members of punk band Suicide Generation teamed up with guys from Desperate Fun and Lysergics and took a musical detour. Hard Times was born with the idea of casting aside their punky pasts, and instead paying homage to glam rock, sleaze rock, and even the proto-glam rock ‘n’ roll of New York Dolls. It is a job that their debut EP ‘Little Satan’ does brilliantly in its own no-frills and semi lo-fi way.

The title track kicks everything off with a grubby riff that sounds like a slightly metallic version of Dead Boys, with the guitars throwing out a barrage of really sleazy chords. The energy is greater than the production values, but there’s a real joy in the band’s uber-trashy sound. With the arrival of a drawling vocal, its hard not to be reminded of Indonesian Junk, so strong are Hard Times’ desires to keep the CBGB’s flame burning, and as the performance gains traction, there’s a great unity between the world of overdriven riffs and natural vocals. At the mid point, there are some terrific musical stops adding to the rock ‘n’ roll energy and a killer lead guitar break that’s far more about presence and aggression than tight melodies. What this track lacks, though, is an obvious chorus hook; half of the vocals are buried in the noise, and the bands obsession with unrelenting riffs seems to outweigh any desire for something more memorable in the sing-along stakes. That said, in the end, it doesn’t really matter since the riffs here are good enough to work without much of a song in tow, and by way of hooks, the band certainly make up for that elsewhere.

Much better, ‘Oh Let Him Go’ opens with a supercharged rock ‘n’ roll riff, overlaid by an incredibly energetic lead, painting the band – very obviously – as devotees of New York Dolls and the much-missed Sylvain Sylvain. Despite the production values being raw, it’s really clear these guys can play, as the two featured lead guitar breaks convey a real confidence and a relative tightness for the style. Immediately making this far superior to the opener, a tight bassline punches through the aggressive guitar work, and a call and response vocal powering the verse is really sympathetic to the retro sound. With a clanking piano filling space elsewhere, a suitably glammy vocal and a very repetitive chorus line, this has all the ingredients of a genre classic – sloppy, but classic nonetheless – and the fact that bits of the track are hugely reminiscent of the Goldie Dawn debut is very much a good thing.

A little looser all round, ‘She Ain’t Here No More’ applies the band’s quickly patented garage punk to something a little sleazier, and some listeners might be reminded of glam bands like Dangerous Toys due to a scratchy vocal, or the early sounds of Pretty Boy Floyd, sounding like a third rate Poison knock-off recorded in a shed. The musical focus may well be a little different, but the force behind the riffs and commitment to sounding like street trash recycling great influences stays firm, and, again, a busy approach to the bass gives the track a great strength, and a weighty chorus encourages shouty participation from the listener. With another sharp lead guitar break on hand to give everything some genuine punch, it doesn’t even matter that some of the riffs aren’t even in tune. This is far more about having fun and, on that score, it works fine.

The EP’s stand out cut, ‘Do Ya Feel Like Lovin’’ reintroduces the band members’ penchant for a punky speed, leading to a sweaty workout that’s more in keeping with The Stripp and New Bomb Turks than Hanoi Rocks. The way the opening guitar riff channels Bon Scott era AC/DC and melds that to a supercharged glam rock riff is as much about trashiness as it is the need to revive a tight and retro rock ‘n’ roll sound. In a little under three minutes, Hard Times serve a potential underground classic with a concoction of grit, sleaze and punk ‘n’ roll charms, with the vocals latching onto a relentless speed, and shrill lead guitars that pierce through the groove and fill a couple of bars with some gloriously sloppy sounds. For those looking for something a little tighter, a middle eight loaded with handclaps for maximum retro thrills gives everything an important lift before crashing head first into the main riff one last time. …And somehow, that last chug through the AC/DC meets New Bomb Turks groove sounds like peak punk ‘n’ roll goodness. If you’ve ever had any interest in bands like Electric Frankenstein and their ilk, then this is definitely for you.

For the musicians involved, the shift from punk to garage glam would only really be a sidestep, but its a great move for all concerned. You want it loud? No problem. You want the riffs to come hard and fast, without feeling the need for perfection? Hard Times have that covered…and then some. For fans of the 70s glam punk hybrid sound, these twelve minutes will push all of the right buttons in a very familiar way, yet still make you believe there’s so much more mileage left in a tried and tested style. A highly recommended listen.