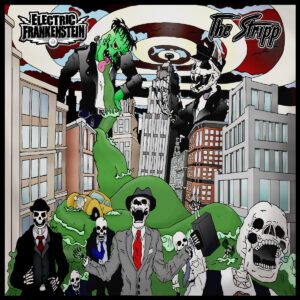 At the time of this release, it may well have been fifteen years since Electric Frankenstein gave the world a full length album of self-penned, brand new material, but the band have kept themselves more than busy. In that time, they’ve released a bunch of singles (including an excellent cover of Alice Cooper’s ‘Under My Wheels’) and also lent their talents to a plethora of split releases, including discs shared with The Hip Priests, Kung Fu Killers and The Bordells. Making it somewhat easier to catch up with their sporadic recording style, a lot of singles and EP tracks have also been reissued on EF full length comps by Ghost Highway Records, further helping to maintain the band’s presence.

Adding further to their vast collection of EPs, splits and sevens, this shared release with The Stripp recycles a couple of old classics, giving vinyl fetishists something new for their collection, while also reminding most people of the Electric Frankenstein sound at its best. Originally featured on the unmissable ‘Buzz of A Thousand Volts’ LP from 2001, ‘American Lies’ is a perfect snapshot of their punk ‘n’ roll machine in action, with a barrage of riffs that sound like a full on collision between Rocket From The Crypt, New Bomb Turks and AC/DC. The guitar tone is dirty, but the full throttle riffs have a curiously melodic style for punk, creating a sweaty and retro coolness that few can match. In terms of punk ‘n’ roll, this hard and fast banger is one of the band’s best, with a riotous drum part colliding with metal-edged riffs and a sweaty punkiness throughout. With a focus on edgy harmonies for the main hook and the kind of trashy lead guitar break rivalled only by The Peawees playing at full pelt, this track really feels like the full package. The more recent ‘Everybody’s Dead Again’ – a highlight from 2005’s ‘Burn Bright, Burn Fast’ – brings more of the same on the surface, but a slightly rockier feel adds even more of a retro slant. The use of heavy drums and stops during the intro countering reverbed guitars is a dead ringer for Led Zeppelin’s classic ‘Good Times Bad Times’ before launching into a dirty punk ‘n’ roll number that sounds like Zeke at half speed. A confidently scratchy vocal from Steve Miller brings everything in line with a lot of great EF material – from any era – but there’s definitely something about this later career tune that feels a little more mature. In that respect, the tracks chosen for this split give a broad representation of the band’s growth over the years.

With regard to The Stripp’s work, the pair of unreleased tunes featured here are a great extension from their self-titled EP (Denim Fist Records, 2020). ‘Dice Man’ (not a Fall cover, sadly) wastes no time in introducing listeners to their retro rock sound with a howling guitar and an intro that sounds like an old Judas Priest number from ’77. Indeed, as the number progresses, it’s hard to ignore the similarities between part of the main riff and Priest’s classic ‘Sinner’, but the band more than make it their own by adding a swathe of punk rock swagger and a massive amount of vocal grit. The main hook of “running, screaming…” needs only two spins before it presents itself as an earworm, and with the addition of an extra layer of very 80s guitar work, it feels like something you’ve always known. With a grubby denim and leather take on a punk ‘n’ roll sound, you might think these guys could be the male equivalent of Thundermother, but at the same time, there’s a punky heart that beats strongly enough to make you realise they’d likely be welcomed on any decent punk-oriented bill. Their gutsy sound goes into overdrive during ‘The Rising Tide’, with a very retro vocal battling with an absolutely insane rhythm where Chris Keogh’s bass and a relentless drum part seem to channel ‘Overkill’ era Motorhead. If that isn’t enough to sell you on the band’s crossover sound, a flurry of old school guitar solos surely will. By the track’s end, it’s clear these guys can really play, and although this is perhaps a little more metal-oriented than some punk purists would like, those with broader tastes will take to this band in an instant. The incredibly tight approach shown here has all the right ingredients to bring new excitement and hefty nostalgia in equal measure.

Despite their lack of full length albums in the decade or more in the lead up to this release, Electric Frankenstein are one of those bands that always feel as if they’re never too far away. They’re also the kind of band that rarely let you down, and the material selected for this split more than shows why. If anything, though, it’s Aussie boys The Stripp that offer the strongest material, since both tracks tap into a retro punky rock sound that runs rings around most of the old guard. Even with some previously available songs present, this is a decent split; it may only be a collection filler for the EF crowd, but in terms of bringing The Stripp to a larger audience, it’s definitely an important release.