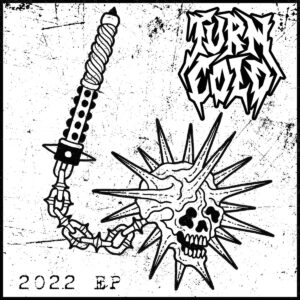 In September 2021, Turn Cold’s debut EP ‘Break Your Faith’ introduced a band with a lot of spirit and a very old school approach to almost everything. Their combination of a riff heavy sound and no-frills production style had much in common with many second division thrash bands from the late 80s, and for many, that was enough to suggest this was a band with a lot of potential.

Their follow up release, the ‘2022 EP’ essentially brings more of the same, with three tracks that really accentuate their gifts for riffs, their love of classic thrash, and an easy affinity with a few massive metal hooks. Lead track ‘The Leash’ wastes no time in setting up an ominous atmosphere with a few echoing notes that carry faint echoes of a slower Slayer number, but its when launching into the main riff that Turn Cold really excel. The number’s first round of intensive heaviness is actually supplied by a mid-tempo riff that’s much closer to hardcore than thrash, but it immediately places both Brett and Matt’s guitar playing in the spotlight with a sledgehammer sound that’s pretty much perfect for the abrasive vocal. Shifting into the expected thrash tropes, the bulk of what follows mixes a classic Bay Area sound with something a little less polished, and the onslaught of jagged riffs is a definite throwback to the genre’s glory days. The DIY production isn’t perfect, but its certainly good enough to allow Turn Cold’s sound to attack with a genuine presence, and as the track progresses, its abrasive style becomes a great fit for Sten’s rather scratchy and Kreator-esque vocal style. With the second half of the track honing in on moments with a call and response vocal and, ultimately, the kind of slow and chugging breakdown that Anthrax would’ve steered to glory on their ‘Persistence of Time’ album, it’s got a little of everything genre fans so often crave. …Except for an absolutely face melting lead guitar break. Perhaps that’s due to the hardcore undertones being a little bigger than before, but in many ways, the track actually still works without any fretboard flashiness. Those hankering after a little more of a dominant guitar will certainly love the multi-layered sound that creeps in during the coda, but in the main, this track presents a solid performance where the main riff is king. Whichever way you approach ‘The Leash’, though, it provides a great start for the EP.

Kicking off with a couple of riffs that sound like they’ve been borrowed from Metallica’s ‘Master of Puppets’ and ‘…And Justice For All…’ albums, ‘An Open Eye’ really catches the ear with a classic sound that cranks the tension, and after a few bars of extremely weighty and rhythmic chugging, the performance veers off into classic thrash where the jagged outweighs the heaviness, and the sharp edges of the riff really drive the abrasive melody forward. Fans of the style will hear traces of Slayer (circa ‘South of Heaven’) and European bands like Destruction, but there’s also plenty here that centres around Turn Cold’s own take on the genre too, with another harsh vocal pushing for a more intense sound and a fantastic lead guitar break juxtaposing grinding notes a couple of soaring sounds. Those elements would make the number feel complete, but Turn Cold have a couple more ideas up their collective sleeve. By cranking the speed for a lightening fast final verse and then following that with a flawless mid-tempo hardcore breakdown, it leads to this four minute workout being the perfect example of the band’s musical assault.

Last up, ‘Poltergeist’ makes a great feature of the twin guitar sound when Brett and Matt lock into another Slayer derived riff, and the rhythm section (Twitch on bass and Matt on drums) lock down the heavy groove. As before – and perhaps somewhat predictably at this point – the slow and heavy soon gives way to a full scale thrash venture, but as always, the delivery of the very 1989-centric sound is absolutely spot on. Round about the second verse, the combination of affronting riffs and semi-hardcore vocal begins to sound like the tightest and most perfect Turn Cold performance to date, and the arrival of an abrasive lead break ensures any important and intensive elements aren’t overlooked. It mightn’t break the mould, but it honestly doesn’t need to; as a hard and fast showcase for the musicians’ combined talents, it does a near perfect job, and in reminding everyone that classic thrash will never die, it’s the kind of track that makes it all sound so effortless.

As before, Turn Cold show a real gift for a classic thrash riff or six, and their abilities to mix the 80s sound with a dose of 90s hardcore is very impressive. The vocals aren’t always the easiest to digest, but there’s plenty within Sten’s sometimes limited range that works for the job in hand, and the musical hooks are always very strong. The hastily thrown together artwork doesn’t do the release any big favours but, with these three songs, the material does a brilliant job at further marking out Turn Cold’s place within a busy underground metal scene. If you’re looking for some huge sounding thrash metal that’s very much driven by many of the 80s hallmarks, you will almost certainly love this.