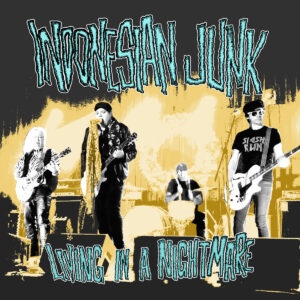 Even when heard alongside other tracks, ‘Type of Girl’ still makes a great impression. A much bigger compliment of retro guitar riffs than before suggests the band have taken the production side of things a little more seriously – without becoming over-commercial – and the whole thing evokes a deep cut from the New York Dolls LP ‘Too Much Too Soon’. Its dirty sound comes straight from the proto-punk scene of ’75; the volume owes everything to The Dictators, but there’s a nugget of Cheap Trick buried within, just waiting to be discovered. As is often the case, Daniel James’s wilfully sloppy vocal style will be a stumbling block for some, but there’s just something about this number’s hugely retro style that’s determined to stick. If the vocal doesn’t do it for you, just try and pay closer attention to a band going all out. Second guitarist Adam Turetzky does his best across three minutes to battle a loud vocal with some crunchy chords, and the reverb coming from drummer Mike Mattner’s kit lends a huge punch throughout. Similarly, the second single ‘One More Try’ (featuring extra vocals from Kurt Baker) aims high in the ragged and noisy power pop stakes. Daniel’s lead vocal edges ever closer to sounding like a mid 80s Joey Ramone throughout and although that makes it almost impossible for Baker to add a natural harmony, the call and response elements are cool, as is the massive riff that drives the chorus-heavy workout.

Digging deeper into the album material, the quality holds up throughout. The classic power pop punch of ‘Knew It All Along’ actually sounds far more like an early Kurt Baker composition and with that revelation, it’s a huge surprise he’s not all over it. Between a terrific guitar led hook and evidence that someone in the band knows their way around an arrangement, this sounds like a 1979 deep cut from the Sire label – a tune so rousing that no end of bad vocals can keep it down. The crashy ‘You Won’t See Me’, meanwhile, blends a perfect fusion of garage rock and power pop throughout, where Daniel’s best Stiv Bators impersonation sounds like the perfect choice. Although Adam decides that less can be be more in the guitar solo department, there’s still enough of a raucous edge to keep the band’s growing fan base happy. An album highlight, the shamelessly retro ‘Tracy’ mixes a jagged bar room riff with some furious slide guitar work, dropping the listener into a place that sounds like the perfect culmination of the band’s previous rough and ready experiments. It’s the sound of label mates Watts fronted by Joey Ramone in a rather obtuse mood, or perhaps Stiv Bators going head to head with a low budget Izzy Stradlin, but in terms of retro cool, it really cooks. It proves that conviction and heart will get you a long way…and when played loudly, this sounds great.

‘Livin’ In The USA’ trades in the power pop and bar room sounds for more of a punk ethic. With the band wheeling out a massive love for the Dictators with equally massive guitars, this aims to grab the listener from the start. Thanks to a sheer energy and an all round trashiness, it has the mood of a retro classic throughout – it’s very much no frills, but all heart. If ‘Spiderbites’ suggested an easy Dead Boys comparison, between the bar room drawl, a selection of shouty gang vocals and a riotously sloppy lead guitar break, this cements it. Equally energetic, the punky aspects of ‘Policeman’ are strongly linked to a couple of old Real Kids greats and the rock ‘n’ roll trashiness allows Adam and Dan to whip up a six string storm throughout. Sure, it’s nothing new for the band, but it definitely shows an increased confidence and presents itself as the kind of track that suggests these recording sessions had been fun.

In an unexpected change of mood, ‘I Don’t Mind’ finds the Junk trying their hand at something rather more jangly. The buoyant riff calls back to the early 80s skinny tie brigade – more Nick Lowe than Johnny Thunders – but there’s still enough at stake to ensure fans will find strong links to the rest of the material, whether its through a distinctive vocal, a ragged twin guitar front line or a really punchy drum sound …And if this album had started to sound like it could be a career best already, ‘Slow Dancin’ ups the ante by applying a very Johnny Thunders vibe to some of Indonesian Junk’s tried and tested trashy tricks. Armed with the simplest of chorus hooks and the biggest of riffs, they truly sound like a band dragged out of CBGB’s at 2am on a cold January morning in 1977. Closing this collection of ten songs, ‘Bawlin’ My Eyes Out’ finds the band stretching out their sound in more ways than one. Starting as a predictable Stones-ish/Watts style banger, Daniel leads the band through a very retro rocker, armed with a ringing lead guitar. Approaching the chorus, a selection of harmonies – provided by City Mouse’s Miski Dee and Ian Olvera of Daydream Retrievers – lends everything a much richer feel. Realising that hook is everything, it returns after a second verse to be pummelled into your skull, against an arrangement that holds firm. The repetition allows for different layers and angles to be pursued: whether those voices are heard against a sparse few bars with the drums taking the lead, or complimented by some amazing lead guitar work that, again, could be Stradlin at his peak, they continue to sound great. …And if you need any further proof of this, the fact that they fill what’s essentially a six minute coda without it becoming dull says it all. When crashing into a brief burst of feedback somewhere around the 9:30 mark, you really get the feeling that Indonesian Junk are more than aware that they’ve signed off their finest album to date.

Topping ‘Spiderbites’ was going to be a tall order, but ‘Living In A Nightmare’ is a rousing success on almost all fronts. Sure, there are times when Daniel James’s approach to lead vocals could be tighter, but between his guitar interplay with Adam, a rhythm section commanding a massive presence throughout, and at least a half dozen chorus driven gems, it’s a record that fans of the trashy garage rock style will love. Regardless of whether you’ve previously followed Indonesian Junk closely, or only own one or two of their previous tunes, this is guaranteed to be an instant hit.