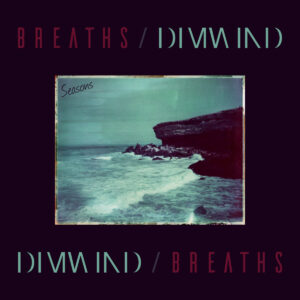 At the beginning of 2022, the world found itself in complete turmoil. Humanity was still battling against the coronavirus pandemic – something that’d threatened to kill everyone – and an escalating war between Russians and Ukraine led to a worldwide tension, fuelled by a power hungry dictator with his finger hovering over the metaphorical self-destruct button. With everyone effectively amid a new cold war, there didn’t seem many reasons to remain positive. Adding to this palate of complete dread and fear, environmental issues were still of a massive concern. The world was now a ticking time bomb in more ways than one.

Drawing attention to those environmental issues that appeared to have taken something of a backseat during the year’s first quarter, US one man band Breaths and Sweden’s Dimwind teamed up for a split release featuring material specifically focusing on the vitally important issue. Amid the two lengthy workouts on their ‘Seasons’ EP, the message of eco-preservation is sometimes telegraphed almost as clearly as the massive riffs themselves, and the results are both harrowing and intensely brilliant in equal measure.

The contribution from Dimwind is incredibly strong. Wasting no time in advertising the release’s environmental theme, their fifteen minute epic ‘Window Passed’ opens with a slow drone accompanied by a British voice over warning of planetary destruction. The main riff then crashes in, and does so in a way that’s far more melodic than expected. Yes, it’s heavy – the driving force behind the arrangement has a huge amount of weight – but the chosen style captures a clean tone and crunch that’s also very accessible. As the band latch onto a hefty riff and hammer it at a mid tempo, there are easy comparisons to be made with Tool and Spanish post-metal band Toundra, which is guaranteed to attract the attention of anyone who wouldn’t normally be enamoured with the band’s usual extreme metal style. After four minutes of this crunchy but melodic greatness, the expected shrill edges appear and Dimwind throw themselves head first into a sheet of black metal riffing underscored by a dense shoegaze inspired drone. The relentless blast of noise has speaker busting potential, but for those able to bend their ears further into the noise, there are various interesting musical flourishes which continue to play out. Some of the lead guitar parts rising and falling beneath the pneumatic rhythms have an almost cinematic feel, and the tightness in which the riff presents itself adds to the genuine scope. Slowing down for a goth infused passage and then a few bars of trad metal, there’s an unexpected further twist, before a disquieting piano melody colours the metal with something that could easily have been influenced as much by Craig Armstrong as Type O Negative. Eventually, there’s a slow, cold groove that accentuates some great drumming, steering the band in a progressive post-metal direction, and the marriage of hard beats and vibrato guitar work creates something very haunting, before – finally – a hard, head nodding riff and a barrage of purer black metal bring a devastating climax.

Not to be drawn into any competitive spirit, one man band Breaths offers something very different. The opening section of their ‘When Soft Voices Die’ centres around some absolutely brutalist black metal, complete with throat rawing, husky vocals sharing messages that aren’t easily deciphered. For the genre averse, it’ll take all of about thirty seconds before attention spans drift, or the skull crushing riffs become far too much. It’s brilliantly played for what it is, it’s merely that Breaths has no real interest in using his talent to ease in gently. This is a pity, since as the number progresses, it becomes far more interesting. Those not driven away by the black metal scariness will soon discover a perfect slab of Melvins-esque sludge tempered by some superb doom, and a quiet, gothic soundtrack worthy workout that really brings out the best in a dark piano sound. There’s even a really melodic section where a Radiohead-esque vocal sits atop a busy drum part and shimmering guitar, almost as if Breaths has taken bits of ‘Amnesiac’ for his own use and melded them with the brilliant dark, gothy tones of bands like The Old Wind. ‘When Soft Voices Die’ is never easy, nor should listeners expect its charms to be instantly obvious, but its the kind of dark and proggy epic that reveals its twisted beauty slowly. You just need to be brave and ride out the first two minutes.

With two pieces of music that are vastly different, it’s impossible to pick favourites. That said, there’s a common thread of darkness and intensity that ensures they compliment each other, and this half hour trudge into the world’s darkest fears feels like a complete work that’s been thoughtfully constructed and well planned in advance. Naturally, it won’t be for everyone, but for those keen on the extreme gothic, shoegaze tinged post/black metal and other extremities, its a brilliant and complex musical puzzle that’s deserving of some close attention.