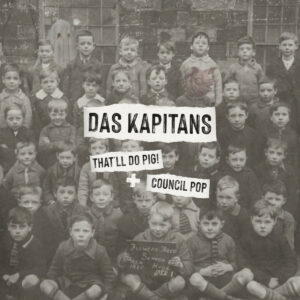 In February 2022, Das Kapitans released their double A-sided single ‘Big Muff’/’MTV’. This was the first new material from the UK noise rock/indie punkers since winding up their ambitious twelve albums in twelve months project, but the new tracks showed anything but a slowing down in terms of creativity. ‘Big Muff’, in particular, showed more than enough evidence that the band would be bringing even weightier riffs in the near future.

This follow up double A-side offers yet more gold from the band, with a pair of sharp edged bangers that often value riffs over lyrical hooks, but at the same time, have the confidence to take Das Kapitans to an even bigger fan base. The single version of ‘That’ll Do Pig!’ opens with a taut riff that brings out the very best in an overdriven guitar, before exploding into a fuzzy, angular riff that shows off a massive love for bands like Fugazi. The interplay between the guitar and drums is very tight, yet somehow fluid enough to make the core of the music feel spacious, and the addition of a distorted vocal adds a very 90s flair. For those already well versed in the band’s quickly assembled catalogue, there’s plenty here that’s instantly recognisable as top drawer Kapitans, especially with the crashing punk-influenced riff driving the chorus delivering the standout moments. What’s more, it’s familiar enough to feel like an instant favourite without ever sounding like a lazy, rehashed or hacked out variant of past work.

The stronger – and more inventive – of the pair, ‘Council Pop’ works a mean descending riff from a loud guitar before branching off into an off kilter tango that sounds like an unholy alliance between an old Blur b side (circa the self-titled LP) and a half remembered piece of 90s art rock from the The Jesus Lizard. The riff is so atonal and angular, you can’t help but be drawn in by it, and a further venture into a slab of noise where a Slint-esque noise smothers the main tune shows how Das Kapitans’ minimalist set up is capable of creating a really full sound. As everything progresses, the constant repetition becomes almost hypnotic, and a slightly flat vocal lends the sharp and distinctive melody another offsetting element that accentuates some brilliantly ugly quirks. Those who love Das Kapitans when they’re going “all out punky” might have to work a little harder to appreciate any musical rewards with this number, but in showing how strong they are when muscling in on an arty/discordant sound, it’s very effective indeed.

It’s safe to say that if you’re already aboard the Kapitans wagon and you’ve found time to explore their twelve album releases from 2021, you’ll love these tracks. Even with ‘Council Pop’ opting for something a little more off-kilter, this release supplies further evidence of Das Kapitans being one of Britain’s best underground bands.