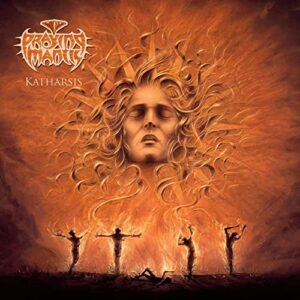 Almost half a decade on, their twelfth release ‘Katharsis’ has many of the musical hallmarks that fans have come to love – and, in many ways, expect – but most of the material takes more of a (very welcome) melodic turn. Right from the off, ‘Cry For The Nations’ offers something a little different from the norm with an unexpectedly theatrical feel. A simple piano line emerges with a tentative melody, which is cemented with a thudding bass, before moving into a very European sounding workout that’s closer to the quieter end of power metal than the usual Mantis fare. Jaycee’s big voice takes centre stage as he chews through a very emotive lyric, turning in a great performance along the way. There’s a feeling that – as good as this is – it could be any number of Frontiers Records signings at the time of release, but eventually a few twin lead guitars and a cracking solo assert a little more of the traditional Praying Mantis sound. It takes a while to attune to this grander approach, but between a strong melody and great playing, it soon asserts itself as a strong opener. And as ‘Katharsis’ progresses, despite taking various musical detours, it becomes clear that even though ‘Cry For The Nations’ isn’t Praying Mantis at their most catchy or immediate, it probably wouldn’t sit quite as naturally anywhere else on the album.

In terms of the expected massive rockers, the galloping feel of numbers like ‘Fallen Angel’ and ‘Panic In The Streets’ has been dialled back, but the tougher end of the Mantis sound is still present in a few places. This is most obvious during ‘Non Omnis Moriar’, a number that couples a confident Euro vocal with a thundering rhythm section, balanced out by some massive harmonies and taut twin leads. On another album, it could be a highlight, but here, it sort of feels as if it’ll be under-appreciated due to some of the other tunes being a little bolder. Still, without being ground breaking or out of the ordinary in any way, it’ll bring enough surface entertainment to those who’ve always enjoyed the interplay between Tino and Andy. An instant highlight, ‘Sacrifice’ opens with a rumble of drums lending an almost tribal feel, and some rather fine guitar work from Tino Troy and Andy Burgess. The intro is so cool, there’s an instant fear that the rest of the track might not hold up, but halfway through the first verse, any such fears are quickly allayed. Taking a small twist on the template for a big rock ballad; Mantis work through a slow and moody arrangement, peppered with a semi-angular riff. Jaycee, meanwhile, approaches the vocal with the grandness of labelmate Toby Hitchcock, but thankfully, half of his usual volume, showing how effortlessly he can handle grandiose melodic metal. With big stabs of piano countering the guitar work, the whole track feels full without ever being “busy”, and by the time Tino steps forth with a big crying solo that sounds as if he’s channelling Gary Moore circa 1984, everything goes up a gear, taking the track to glory. A couple of listens in, you could be convinced that this piece of bombastic maturity is one of the current line-up’s best songs.

In a massive twist that, again, doesn’t always sound much like Praying Mantis as you’ve come to know them, ‘Don’t Call Us Now’ works an almost McCartney-esque rumpty-tumpty rhythm which, overlaid with melodic guitar work, brings an unexpected marriage of 80s melodic rock sounds and 70s power pop rhythms. By the chorus, the rock heart pumps more vigorously as the band wheel out a world of huge whoahs designed to work a live audience, and in yet a further twist, the instrumental break fuses hard rock with 70s prog, as the band attempt a folk-prog jig worthy of Focus and peak Jethro Tull. Despite clearly being three different ideas glued together, it’s all great, thanks in no small part to Barrett and Tino being locked into a great sound driven by those leads, and the indispensable Chris Troy underscoring everything with one of this album’s punchiest bass sounds. Opinion will surely be divided as to whether this really works or not, but you couldn’t accuse the band of not trying something a little out of their comfort zone. At the other end of the scale, ‘Ain’t No Rock N Roll In Heaven’ is a veritable cheese-fest with its stomping beat and chugging riffs. There are a few fine lead flourishes but with a complete non-starter for a guitar solo, Jaycee belting his voice unashamedly and lyrics that feature such howling embarrassments as “When I was born, I started to die / When I was six years old, I thought I could fly” and “I hope the devil treats you well”, this is no better than the dregs of Paul Sabu’s worst offenders. Granted, there’ll always be some fans who love this kind of thing, but luckily, for those with more sophisticated lugs, the skip button on your CD or mp3 player makes it easy to avoid this after the first devastating listen.

As before, a couple of the album’s biggest highlights are supplied by the more AOR influenced material. ‘Closer To Heaven’ revisits the sound of earlier tracks like ‘The One’ and ‘All I See’ whilst conveying some of the grandiosity of Magnum’s post ‘…Broken Arrow’ releases. There’s very little here you won’t have heard from Praying Mantis in the past, but between a shameless 80s vibe and with Jaycee in arguably great voice, it passes a near flawless four minutes. Sounding far more like Uriah Heep circa ‘Abominog’, ‘Long Time Coming’ fuses a punchy rhythm to a clean toned guitar sound, creating solid old school rock that harks back to simpler times. Atop the rock solid four four beat, Tino’s ringing guitar bring a pleasingly retro sound that’ll appeal to most fans of 80s melodic rock, whilst Jaycee tackles party-centric lyrics with the manner of a man who believes he’s delivering a serious mantra. These things have to be taken that seriously, of course, otherwise they’re very much in danger of sounding ridiculous. ‘The Devil Never Changes’ – another highlight that’s in danger of being overlooked, tucked away as it is at the end of the album – offers some brilliant vocals against a shiny melodic rock backdrop that features another round of top-notch twin leads, gang vocals and pointed bass work that takes some of the band’s previous ideas in a more confident direction. After a couple of verses filled with solid but predictable melodic rock, a bridge turns everything on its head with heavy beats and ominous vocals, before picking up the pace for a NWOBHM inflected guitar solo – at which point, this number elevates itself to being one of the best closers in the band’s long history.

In some ways, it’s impressive that Praying Mantis aren’t just rested on their laurels by delivering a carbon copy of ‘Gravity’, even though most fans would’ve loved that. Despite an obvious misstep with ‘…Heaven’ and a couple of other tunes likely to raise an eyebrow or two, ‘Katharsis’ is mostly great. Praying Mantis shoud be commended for delivering an album that’s more varied than its two predecessors, as it shows the band are still very much inspired by new challenges when it comes to writing and recording. For some listeners, its bigger melodic twists could even make this more appealing. Yes, Cuijpers still approaches most things at full pelt and full volume which won’t suit everyone, but there’s no doubt he’s having the time of his life – even on utterly disposible stuff like ‘Ain’t No Rock N Roll…’ – but as before, he’s the right man for the job. As always, though, the biggest draw comes from the musical unity between Tino and Andy, Chris’s punchy bass work and various unshakable riffs. In terms of big, melodic rock, ‘Katharsis’ has enough of that and more. It doesn’t try to change the world, but it definitely adds something a little more interesting to the Mantis legacy.