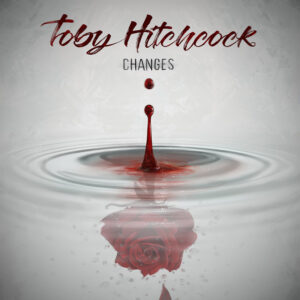 His third solo disc ‘Changes’ very happily ploughs a similarly melodic furrow. An instant highlight, ‘Say No More’ has a very synthetic 80s sound and due to the all round sheen, Hitchcock sometimes sounds like he’s calling back to Lou Gramm’s underrated ‘Long Hard Look’ LP. With his big voice dominating a simple chorus, there’s little doubt that he’s the star of this vehicle, but his assembled band also put in some pretty hard yards, with guitarist Martin Jepson Anderson offering a fairly complex but perfectly executed solo and, during the quieter passages, the ever present Alessandro Del Vecchio drops in some fairly smart and retro bass sounds. Almost equally strong, the taut melodic rocker ‘Garden of Eden’ gives drummer Nicholas Papapicco more of a workout via some busy toms during the intro and instrumental sections. By the time the chorus rolls around, everything explodes into some straight melodic rock that could be any number of Frontiers Records’ Euro acts, but due to some great playing it actually doesn’t suffer for its identikit feel. The band are in good shape and Hitchcock is clearly loving every moment, stretching his voice with ease. The title track supplies even stronger melodic rock charms, purely by playing very safe. Something of a by numbers AOR arrangement that would have suited any number of Euro projects from Frontiers. In this instance, fans will be dropped into a world of soaring guitars complimenting a bombastic chorus that isn’t a million miles away from something that could have been drawn from later period Khymera. Hitchcock approaches every note as if offering listeners an insight into a huge new musical world, ensuring any lack of originality is more than made up for by a performer showing a great self-belief. Factor in two terrific lead guitar breaks – one full of long, vibrato edged notes, the other a little busier, driven by effortless sweeps – and this actually becomes a real treat, tried and tested or otherwise.

If only Toby had continued to dial things back, ‘On The Edge of Falling’ could have been an easy highlight since it has many musical hallmarks that call back to Journey’s classic ‘Escape’ album from 1981. There’s plenty in the heavily rhythmic musical base that sounds like Hardline reworking bits of ‘Keep On Running’, while the smooth backing vocals hint at a keenness for the classic ‘Stone In Love’. In addition, there are many lead guitar flourishes where Anderson appears to be channelling Neal Schon without being a direct copy. Musically, this presents a great band in full flight. Hitchcock, meanwhile, can be found bellowing relentlessly through each line like a cut price Harry Secombe who’s been invited into the studio to live out his dream of being a rock star for an afternoon. To say that it doesn’t create the most natural of marriages would definitely be an understatement. Thankfully, the strong AOR bias still makes it sound so much better than most of the Lions’ output, but it really should’ve been better than it is. The same goes for the Jimi Jameson-esque ‘Two Hearts On The Run’, a fantastic number with a near-perfect melodic rock set up, ultimately smothered by incessant bellowing from a man who decided that “less is more” wasn’t an appropriate piece of advice… When going head first at an anthemic chorus at full volume, it’s sometimes hard to take Hitchcock seriously, but his band sounds absolutely superb throughout. This is one of those numbers that some people would love to hear dished out to other Frontiers acts; Johnny Gioeli and Issa could both do absolute wonders with this particular track.

Elsewhere, ‘Forward’ appears to champion a very early 90s AOR sound at first with a great riff coupled by a huge barrage of whoahs. This creates a huge, attention grabbing set up before Toby even puts in a proper appearance. The first verse cements those AOR credentials, sounding very much like a throwback to classic Foreigner and while the chorus is, perhaps, a little too bombastic, it’s restrained compared to the Pride of Lions output. As with the best bits of this album, listeners who like everything to venture towards larger sounds will certainly find something of a new favourite here, and ‘Before I Met You’ offers some decent melodic rock. The track begins with some particularly Euro sounding keys and mechanical edges, almost with a retro dance pop vibe, but thatt’s actually something of a red herring; before too long the track blooms into some fairly standard AOR fare that’s big on guitars and even bigger on the vocal. An English translation of Despina Vandi’s hit ‘Xano Esena’, it’s surprising how well it fits the album both in style and tone, considering it wasn’t written with this project or Hitchcock’s distinctive tone in mind. In some ways, the English lyric doesn’t flow quite as well, but the vocalist gives his best, while the combo of chunky guitars and blanket keys help to create a near perfect musical backdrop.

No Toby Hitchcock is complete without a massive ballad, and in ‘Run Away Again (From Love)’, the writers definitely tailored the arrangement towards Toby’s big delivery – something that’s unavoidable when everything shifts into a very theatrical pre-chorus. The bombastic and very stage tones that come through make it a little more of an acquired taste for the rock fan, but even so, there’s enough for the hardened AOR buff to enjoy too. The assembled band in top form; an arrangement that ensures everything centres around massive soaring guitar often works out for the best. Pride of Lions fans could argue that there are better examples of the style further back in Hitchcock’s catalogue, but in terms of fitting this album and providing a little contrast to the straighter rockers, it does a solid job.

There are no big surprises here; just well crafted melodic rock, delivered with a real sense of commitment. The singer plies his trade with an incredible confidence throughout and, despite a few moments where he could be accused of over performing, he often sounds like a man approaching the top of his game. The best tracks’ throwbacks to a melodic rock past also result in a couple of the best tunes Toby has recorded to date. With all of that in mind, ‘Changes’ certainly gives Toby Hitchcock’s small army of fans the follow up to ‘Reckoning’ they’d hope for…and the kind of record they deserve.

Read a review of ‘Reckoning’ here.