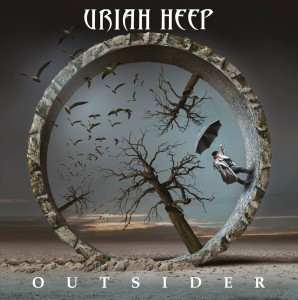 The fusion of drums and Hammond B3 that sit at the heart of ‘Speed of Sound’ represents classic latter day Heep, its power suggesting grandness without slipping into grandiosity.  Settling into a more sedate rhythm for a number that’s somewhere above the mid-pace though shy of being a full scale rocker, long serving vocalist Bernie Shaw – now making his eighth appearance on a Heep studio recording in twenty five years – belts out notes with supreme confidence, his weathered voice sounding every bit as good as ever. In terms of power, this is a strong opener, though at first it doesn’t appear to have as much of the spark as some of the material from the previous few albums. Subsequent listens, however, unveil a number that’s rich in hard rock melodies – it’s a track certainly worthy of standing alongside a few of the band’s other works.

With the more melodic ‘One Minute’ the pieces all fit to create something equally great.  Following a lovely piano intro courtesy of Phil Lanzon, where he’s quickly joined by Shaw exploring the softer edges of his still-impressive vocal range, the drums lay down a hefty beat as founding member Mick Box tackles a choppy but melodic riff.  Pretty soon, things shift into classic hard rock; Lanzon shifts to the Hammond organ and subsequently punps out hard chords mirroring the steady beat, its mid pace allowing a simple chorus to take hold.  Beneath the lead instruments, bassist Dave Rimmer proves to be a decent replacement for Bolder, adopting a rock-solid approach that occasionally rises with a few nice lead flourishes.  [Judging by a couple of other performances on this disc, Trevor can rest easy].  Resting between 70s hard rock and 80s AOR, ‘Jessie’ straddles both camps of Heep tradition, combining an old fashioned organ and riff with the kind of sing-along hook befitting of Pete Goalby and the ‘Abominog’ era.  With more understated harmonies, everything is geared towards a solid lead vocal, before Box tackles a lead guitar break that sounds a touch too busy for the otherwise measured performances.   Simple and to the point, this number provides ‘Outsider’ with its most infectious chorus, the dictionary definition of “classic rock”.

Toughening up a tad, the crunchy ‘The Law’ relies a little too heavily on simple repetition (much in the way the previous album’s ‘Nail On The Head’ had done), but isn’t without some good moments.  There’s a full scale hard rock organ bashing, a strong gravelly vocal, a dirty lead guitar break with Box leaning heavily on wah-wahed notes and a stupidly busy mid-section where double bass drums thunder against almost comical falsetto vocals – clearly a deliberate throwback to Heep’s 70s pomp (ooh-ah!).  Cranking the gears further, the band take the fastest and heaviest moments of this track and fashion the title cut from them almost entirely.  With thundering drums and a furious pace, that track has hints of the New Wave of British Heavy Metal in it’s drum-led onslaught and although quite fun for a minute or so, soon becomes quickly tiresome.  It finds itself in the position of being the album’s only real misfire, it’s unsubtle approach really not helped by Spinal Tap scenarios concerning a vigilante type figure – lyrics which reach a hard rock nadir as Bernie croons of a man and his “reflection at night”. It’s not that Heep can’t do the faster paced stuff, of course, there are plenty of great upbeat tracks within their huge catalogue…but this just doesn’t work.

With Russell Gilbrook hammering at his drum kit with reasonable force, ‘Looking At You’ redresses the balance as far as hard rock stompers are concerned.  Driven by hard snare, his playing is complimented by a thundering bass; everything results in a rhythm section of which the band should be proud.  In terms of lead work, this is Lanzon’s finest performance this time out, hammering hard and fast at his Hammond in a manner befitting of the late, great Jon Lord or Don Airey.  Mick Box, meanwhile, takes a rougher tone in his rhythm guitar playing, with a surprising leaning towards choppier notes.  Whereas ‘The Outsider’ was left wanting of melody, ‘Looking at You’ has the luxury of a half decent hook and some solid harmonies – elevating this from a good number to a potentially great three and a half minutes, the soaring harmonies leaving no doubt that this comes from a Uriah Heep elpee.  [as with the previous couple of releases, it’s these elements that make up the nuts and bolts of most of this album]. Elsewhere, the punchy ‘Say Goodbye’ finds Mr. Box indulging in a groove-based, almost circular riff with a dirty tone.  The rest of this number could be utter bilge, but that riff would make it instantly memorable.  Luckily, beyond that opening groove, the hallmarks of a great Heep track are all present.  Those who’ve heard – and love – ‘Wake The Sleeper’ and ‘Into The Wild’ will have no real surprises, but it’s fair to say that Bernie Shaw is in fine vocal form (his gritty edge best suited to melodic crunchers).

Are Heep sticking to familiar formulas here? Most certainly, but those ingredients that made ‘Wake The Sleeper’ and ‘Into The Wild’ enjoyable releases show little to no sign of outstaying their welcome on ‘Outsider’ thus ensuring the die-hard fans will be thrilled, even at times where the song writing doesn’t quite reach previous heights.   ‘Into The Wild’ definitely has the edge on this – it’s a more consistent album in terms of both sheer melody and memorability – but taken on its own terms, ‘Outsider’ is certainly strong enough.   The half-dozen gold standard tracks make it far from Heep’s worst album and even the more run-of-the-mill tunes still manage to summon enough never say die charm, which should be enough to please many a fan of classic hard rock.