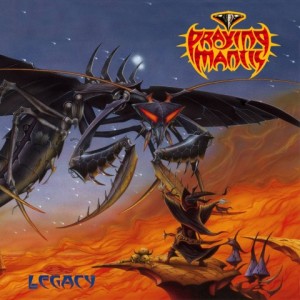 Although the album’s title is so obviously a tongue-in-cheek reference to their staying power, regardless of history, one fact needs to be put across regarding the tenth Mantis release ‘Legacy’: pretty much anyone with a keen interest in the more bombastic end of the melodic rock scale needs to hear this record.  Despite a constantly shifting line-up and the arrival of yet another vocalist, thanks to a big production value (much better than that on 2009’s ‘Sanctuary’), Praying Mantis sound absolutely fabulous on the majority of the eleven numbers.  While there are a couple of numbers where they perhaps push the bombast a bit too far, these are counterbalanced by some great melodic tracks.

Obviously keen to storm in with something huge to make an lasting impression, ‘Fight For Your Honour’ is hugely grandiose, a layer of keys lacking subtlety from the outset even before the band open with the main musical hook.  The harmony vocals are strong, but the general mood is huge. Moving into the verse, John ‘Jaycee’ Cuijpers makes his presence truly felt, belting each line at the top of his lungs.  Within a couple of lines, you’ll either tune into his Jorn Lande styled force or find it off-putting.  If you can make it past that, though, the keen melody cuts through, particularly in the guitar depot with two featured solos of the highest order: the first bringing some classic Mantis twin leads, the second showcasing some absolutely terrific tapping.  It’s not hard to see why this appeared in the live set even before ‘Legacy’s release.    Turning down some of the vocal bombast of ‘Fight For Your Honour’, the mid-paced rocker ‘Better Man’ allows the whole band to shine.  Cuijpers gets to curl his voice over a crunchy riff; the chorus is more than reasonable and the general structure is tough and – even with a tried-and-tested quality –  the band sound energised.  With the arrival of another near-faultless twin lead break, things turn up a notch, representing good old fashioned hard rock that wouldn’t feel out of place on those aforementioned Uriah Heep discs.

‘The Runner’ opens slowly with a wash of keys before breaking into a classic melodic metal workout, again with plenty of twin leads and a thunderous drum performance.  The verses hint at mid-eighties Judas Priest at their more melodic, but with the arrival of a huge chorus where Cuijpers is clearly in his element, there’s also  touch of Heaven’s Edge, Pole Position et al, especially given that beneath the bellowing voice, there’s some great, crashy melodic rock to be heard.  The full-pelt approach lends itself to a couple of blistering solo spots one more; the guitar work is great and a squonky sounding keyboard break brings a touch of the very old-school.   It’s one of those keyboard sounds that’s gonna divide opinion:  people will think it’s brilliantly neo-progressive or riotously funny – either way, it’s made an impression.  ‘Against The World’ returns to the bombast of the opener, a tune that’s lyrically a bit silly – or run of the mill if you’re Jorn or Dio – but ultimately saves itself by having a solid arrangement.  Praying Mantis never move out of their comfort zone, but this isn’t necessarily a bad thing and soon enough, like ‘Fight For Your Honour’, it becomes memorable due to some flawless solo spots.

While the hard rockers are good, it’s when bringing in the purer AOR sounds that Praying Mantis really shine.  Opening with a flurry of keys that suggests a power ballad, ‘Believe’ quickly blossoms into a great slab of melodic rock.  Pitching those keys against bass throughout a sparse verse, Chris Troy’s thumping bottom end has a very pleasing tone, but as always, it’s the twin leads that make the piece with their crisp sound.  Chorus wise, it’s a winner, shifting away from the Dio-isms and into a world of blanket keys and harmonious group vocals, Mantis bring a touch of the eighties with style.  Although a little pompy, ‘All I See’ works a great staccato riff, overlaid with some great soaring lead work, overall not too far removed from ‘It’s Not Over’ era Shooting Star.  During this number, Hans in T’Zandt’s measured approach behind the drum kit lays a steady beat from which everything else grows: although everything here is first rate (with Cuijpers doing his damnedest to pull back a little), the attention to harmonies is superb, leading to a tune that entertains in classic AOR fashion.  Even better musically, ‘The One’ employs the kind of riff that fills eighty seven AOR tunes a year (eighty of which are called ‘Don’t Walk Away’). Stepping away from the flashier and more in your face sounds, Tino’s ringing guitar tone is a match for many of the mid-eighties AOR greats.  A key change into the pre-chorus suggests great things afoot; stretching a little farther and adding a wall of harmonies, the chorus – while perhaps not as strong as ‘All I See’ – presents a reasonable hook, from which the big vocal arrangement sounds suitably emotive.

While Mr. Cuijpers’ insistence on singing at full pelt a great deal of the time can be a little wearing in places (particularly so during the pre-chorus sections of the unashamedly grandiose ‘Tokyo’), in terms classic melodic metal, the tunes on ‘Legacy’ are very strong indeed. There are absolutely no filler tracks and those who’ve followed the fortunes of Praying Mantis over the years should certainly approach this album with a keen ear. Those unfamiliar with any of the band’s prior work stand a very good chance of hearing a few tunes that will very much appeal from the off, making this release a big hit for melodic hard rock buffs all round.  Sounding better with each play, ‘Legacy’ is one to file next to Uriah Heep’s excellent ‘Into The Wild’ – a potential go-to album for that classic, bombastic rock fix.