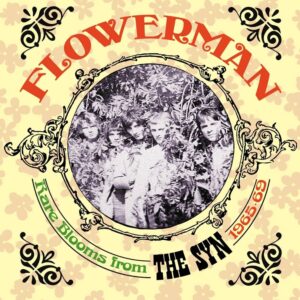 For many years, psych/prog band The Syn’s recorded output totalled a couple of rare 7” singles. Although much loved by collectors, these recordings remained elusive throughout the 80s and 90s, all too rarely spotted at record fairs or in second hand record shops. As an early vehicle for Yes men Chris Squire, the historical value of the discs was perhaps greater than their monetary value, but they often seemed shrouded in mystery to those who discovered Yes much later. Thankfully, Umbrello Records came to the rescue in the mid noughties when they reissued The Syn’s four original 7” sides along with other period rarities and other recordings, and even though their ‘Original Syn’ compilation was terribly titled and looked cheaply packaged, it would be an invaluable collection filler for those lucky enough to grab the limited edition release.

The presence of Squire has ensured that psych fans and collectors have continued to retain their interest in The Syn, and ‘Flowerman: Rare Blooms From The Syn’ – a 2021 release from 60s specialists Grapefruit Records – gives them something extra to add to their collections. Most of it is merely recycled highlights from the previous set, augmented by a couple of selections from a later Syn comp, but in providing the most concise history of The Syn to date – the essentials without the padding – it creates a very pleasing package.

The heart of the collection is supplied by the four Deram sides from ’67. ‘Flowerman’ shows immediately how The Syn tapped the heart of the underground psych movement. There were other bands who delved further into whimsy and sound effects (as with a couple of Dave Mason’s early contributions to Traffic), but the hallmarks of the genre are all wedged into this tune. From its opening bell noises, through a bouncing verse where frontman Steve Nardelli chews through various gardening ideas including “giving attention to rhododendrons” in a soft drugs haze, there’s much to love. A hazy middle section changes the mood as the rhythms fall away to explore a wandering, non committal trippiness, but the other-worldly feel is still present. Holding it all together, there are strong R&B roots, with Gunnar Hakonarson’s drums and Squire’s bass taking bits of Small Faces’ 1967 ouvre and melding its angrier parts to something that isn’t a million miles away from a deep cut from ‘The Who Sell Out’. Making the big even bigger, a world of harmonies and a brass section aim for the jubilant…and mostly succeed. It’s fair to say that although this is very much of its time, it’s also quite charming. ‘14 Hour Technicolour Dream’ delves even further into the heart of ’67 with high harmonies, some weird buzzing guitar sounds from John Painter falling somewhere between the work of a US garage band and a kid honking on a kazoo, and drums that clatter with abandon. There are a lot of layers here, but a solid bassline and a few more melodic vocals on a brief chorus hook make it all work. In short, it’s the kind of tune that lovers of off-piste 60s pop/rock will take a shine to very quickly.

‘Created By Clive’ takes a sidestep into novelty with a keyboard heavy tune where wordless vocals underscore a slab of 60s pop that’s almost as bubblegum-centric as psych-worthy. It isn’t really until the chorus hits where it all starts to make sense, with Nardelli delivering whimsical lyrics about a new fashion item with the kind of gravitas deserving of a world changing event. The garments aren’t clearly detailed, but the music seems evocative enough to suggest they’d be far more commonplace at Lord John than Granny Takes A Trip. Due to overly loud and slightly annoying keyboards throughout, some of Squire’s contributions are all but inaudible, but a couple of sliding bass notes creeping through suggest he’s underscoring this disposable pop tune with more of a complex approach than it possibly needed. A highlight among The Syn’s original recordings, ‘Grounded’ presents a very loud drum part set against chiming guitars that evoke the blues-edged psych material of the era. As the freakbeat oriented tune unfolds, it becomes very clear why The Syn had a residency at London’s Marquee club throughout 1967, sharing stages with artists as diverse as The Jimi Hendrix Experience, The Spencer Davis Group and Love Affair. Beneath the more rudimentary guitar work, Squire gives the performance most of its muscle, weighing in with a great bass part, partially taking the lead. There’s much less of a jazz leaning in comparison with Yes circa 1969, but it’s clear to hear how his dominant style already aimed to take the aggression of John Entwistle into far artier places.

Further listening is supplied by a well curated selection of tracks, none of which saw the light of day during the band’s original lifetime, but have since popped up on other compilations. A rehearsal recording from 1967 provides the only known source of a work in progress ‘The Gangster Opera’. Stretching across six minutes, the listener is taken through various moods, from a very surf rock inspired opening, through several passages of loud garage rock augmented by theatrical backing vocals and into a cheeky melody that borrows from 50s doo wop. The source material is rough; dominated by vocals and drums, it only gives a limited insight into the piece, but enough can be gleaned to assume it would never have been as grand as Keith West’s unfinished ‘Teenage Opera’. A rough acetate recording of ‘Merry Go Round’ from 1966 sounds far more like a classic recording from Phillip Goodhand-Tait & The Stormsville Shakers than “typical” Syn fare, but a chiming guitar part and impassioned vocal suggest this could have been a mod-baiting floor filler under different circumstances.

Changing the mood again, ‘The Last Performance of The Royal Regimental Band’ – a shelved recording from ’69 – suggests that someone within The Syn had some grand ideas, since the band is joined by a full marching band, bring the brass, pomp and circumstance that comes with such things. At the heart of this musical parade, Nardelli recalls how “nostalgia fills the air with this victorious regimental band” and there are times when the rest of The Syn might as well not have bothered showing up for work. However, there are flashes of psychedelic cool thanks to Andrew Price Jackman’s harpsicord solo and Squire occasionally popping up with a jazzy bass fill. If the unfinished ‘Gangster Opera’ suggested one eye on the stage, this throwback to a music hall era certains confirms such ambitions. It may not play directly to The Syn’s rock audience, but a few plays will be enough to convince most people that this recording is something of a lost 60s classic. Dating from the same era, ‘Mr. White’s White Flying Machine’ features members of The Syn backing Ayesha, and the mix of showtune grandiosity and sunshine pop works brilliantly. With Squire’s punchy basswork carrying the bulk of a melody behind a confident vocal, it immediately catches the ear. Once the rigid rhythms are intercut by light entertainment brass, aeronautic sounds and bits of disjointed piano, there’s a very busy feel, but it’s brilliantly arranged in a way that shows off The Syn’s musical range very effectively.

Two demo quality recordings from 1974 credited to Narsquijack (a composite of Nardelli, Squire, Jackman) are retty much aimed at fans only. Never really designed for release, these musical snapshots are pretty rough. ‘Cadillac Queen’ is a piano based piece that doesn’t feel a million miles away from a Leon Russell pastiche, and although Jackman’s piano work is strident, there’s little song-wise to back it up. Occasional guitar notes wander in, make a twanging rubber band sound, and slunk off sheepishly, and poor Steve sounds like he’s mumbling into a tin can telephone. The guitar strummed ‘Sunset Boulevard Lament’ fares a little better in that you can sort of imagine it being given a much better send off by a mid 70s Donovan wannabe, but as another tune that never really inspires. Considering these demos were designed to advertise their new publishing company, there’s really not much that suggests greatness. if you compare these to the Elton John/Bernie Taupin songwriting demos from ’68/’69, they’re very ordinary, and as history has shown, even Elton’s much quirkier and distinctive songs were slow to gain interest from others. These songs stood almost no chance.

Rounding out this collection, a pair of recordings credited to The Selfs and dating from 1965 give some indication of the band’s musical roots within the R&B scene before psych hit. ‘Love You’ in particular offers an important listen for Squire devotees with its raw energy and odd twist on something that sounds like it started out as ‘Route 66’ during rehearsals. Their version of The Who’s classic ‘I Can’t Explain’ is even more ragged, with a hard edged guitar part from John Wheatley. There’s a certain amount of interest to be had in hearing a young band hammer through their heroes’ work with gusto, but to say the recording is rough and ready would be an understatement. Fans of the original ‘Flowerman’ single will be delighted by an earlier demo showing the song in almost complete form, only shy of a couple of its smaller details and making more of a feature from the tinkly harpsicord sounds throughout. It’s a great and enlightening listen, suggesting that once The Syn found their niche, nothing was approached half heartedly, and this demo sounds better than some 60s bands’ finished work. Meanwhile, at the other end of the Syn timeline, a re-recorded ‘Grounded’ works as a primer for the reunited band of the mid 00’s. The playing is superb: the organ sounds are much fatter, the rhythm is crunchier and the reverbed vocals are loaded with a maturity that the 1967 Syn would never have achieved. In its slightly heavier guise, with more fuzz guitar than before and a much more obvious Squire presence, you’d never guess this had been written almost forty years earlier. In some ways, it feels really out of place on this disc, but in other ways, it brings everything full circle, showing how The Syn not only laid tentative foundations for the burgeoning prog scene in the 60s, but also had something relevant to add to it in the next century. For the Yes fans, it’s amusing to hear the riff from ‘Every Little Thing’ floating in at the end too, as a musical easter egg that tips the hat to The Syn’s most famous musical relation.

Some of this comp’s archive material is as rough as hell, but from a fan perspective, it’s all important in its own way. The two previous Syn comps are a little more in depth (especially if you want to find out a little about the later reunions), but ‘…Rare Blooms’ is actually superior, since it isn’t weighted down by too many non-period recordings or the interview with Squire that filled the majority of ‘Original Syn’s second disc (though nice to have, interviews are almost always a once-only listen). The accompanying booklet provides the perfect overview and is packed with rare photos, and – crucially – the source tapes used for the key 1967 singles and 1969 oddities are very good. The most obsessive Squire fan will undoubtedly want this regardless of owning the the recordings elsewhere, but for The Syn novice, this will be of obviously much greater value. In terms of supplying a brief career overview and providing an insight into Squire’s history, though obviously flawed, this is invaluable.