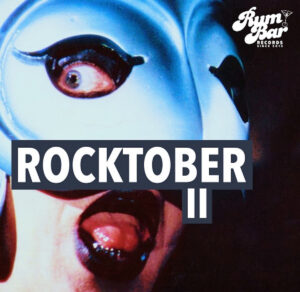 Taking pride of place are two current singles from The Dirty Truckers and Abbie Barrett. For those who’ve not had the pleasure, The Dirty Truckers are one of Boston’s finest rock bands and their ‘Remember One’ serves up a full compliment of grubby rock that fuses the Rolling Stones obsessions of Watts with a ringing power pop edge that calls back to Soul Asylum’s Twin/Tone years.  It may not be as chorus heavy as some of the band’s other tracks, but between a cool, natural vocal, great riff and a melodic lead guitar break, it is a solid enough reminder of why this band have been a brilliant underground for so long.  Offering retro sounds of a completely different style, Abbie’s ‘I Will Let You Know’ comes loaded with rhythm guitars on loan from The Cars and squirly new wave synths, but the track is far more than a straight 80s throwback.  The new wave elements are contrasted by harder edged, fuzzy guitar lines delivered with more of a melodic punk intensity, with a couple of moments even tipping the hat to the later works of Sonic Youth.  The real star, though, is Abbie herself, and her lead vocals waver between an aloof moodiness and very cool rock/pop energy.  A few plays uncovers the kind of track that’s set to become part of your regular listening.

Label favourites Watts look back to the past with the title track of their ‘On The Dial’ LP, a dirty, swaggering rocker loaded with massive riffs and a grubby vocal. In three minutes, the band’s retro cool shines through, and even though they’d arguably go on to record better works, there’s plenty here to satisfy fans of their retro style. A solo tune from Watts man Tim McCoy also offers a two minute belter where odd, crooning vocals sit on top of a punky riff and the hooks work around a brilliant call and response that’s very obviously derived from The Replacements’ classic ‘I Don’t Know’. For the Watts fan, it’s a great addition to the collection.

The sampler provides an easy way to catch up with Miss Georgia Peach, whose current digital single ‘You Blow My Mind’ is a country rock stomper that mixes her usual sass with bits of a grubby blue collar rock guitar sound and a throwback to Loretta Lynn’s storytelling.  The over pronounced vocals – delivered as a male/female duet with Blaine Cartwright – give everything a very staged feel, but it seems perfect for the job in hand with the old country vibes often given a massive kick up the arse with some overdriven guitar work.  Once you tune into the tongue in cheek feel of everything, it’s a great performance, and hearing the whole band pull into a massive, crashy finish suggests a collaboration with a great energy.  Canadian power pop stalwarts Dany Laj and The Looks showcase their wares with ‘My Head’, a tune from their 2019 LP ‘Everything Old Is New Again’, and whilst it isn’t as catchy as some of the best bits from their current ‘Ten Easy Pieces’ release, it brings enough of a quirky throwback sound to thrill fans of the early 80s “skinny tie” and new wave sounds.  The Cheap Cassettes return with ‘Endless Summer Ends’, a mid-tempo tune that’s absolutely loaded with taut rhythms and retro vocals, and label favourites The Adam Brown mix 60s cool with a touch of proto punk noisiness on ‘Lightnin’ Lightnin’, a catchy as hell number that’s set to drive its simplistic chorus into your skull without remorse.

On top of all of that great stuff, there’s something a little punky from Bullet Proof Lovers featuring Kurt Baker, and although their ‘Take It Or Leave It’ is now one of Rum Bar’s older tunes, when heard as part of a huge collection such as this, it holds up brilliantly with a curly vocal colliding with a massive, overdriven riff, whilst The Peppermint Kicks serve up more swaggering retro rock on ‘Roxetta Jones’. One listen to this will be enough for Watts’ fans to love this new project from the always busy Dan Kopko. You’ll also find a trashy cover of Blondie’s ‘(I’m Always Touched By Your) Presence Dear’ from A Bunch of Jerks, sleazy indie rock from Cromm Fallon, shimmering retro pop from Cindy Lawson, and hard edged rockabilly from Classic Ruins.

‘Rocktober II’ does its very best to show off almost every musical interest of the Rum Bar label – both past and present – and with thirty eight tracks in all, it’s a sampler that doesn’t skimp on either quantity or quality. It’s yours FOR FREE via the Rum Bar Records Bandcamp page. You can stream it via the widget below, or click here to go through to Bandcamp and claim your download.