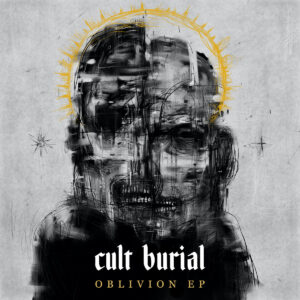 Fans of the debut aren’t necessarily in for more of the same here, though. ‘Oblivion’ – and its title track in particular – is the sound of a band progressing. In musical terms, you might even say they are taking their doom/death hybrid into progressive territory. Clocking in at almost ten minutes, that track is pretty much the culmination of every Cult Burial experience and experiment to date. Its opening passage reels in the listener very slowly via a lot of distortion interspersed with clean guitar sounds, giving no real indication of what’s to follow, and then, after a minute or so, Cult Burial wheel out an absolutely crushing doom riff. This is particularly effective since its contrasted by the clean notes, setting up a really great and gothic atmosphere. It doesn’t last: barely a minute later, they’ve switched gears again for a few bars of crushing death metal, before moving into a thrash/black metal mood. This restless spirit continues, and is swiftly followed by a brief interlude where more goth-infused riffs dominate, before everyone settles upon a push and pull between pure sludge and classic death metal. Linking the ever restless music, there’s a deep and throat-caned vocal that draws heavily from death metal’s roots – something that’ll be make or break for most listeners – but it’s quickly obvious that this band truly means business. Five minutes in, it’s all change once more for an instrumental section where thrash metal mechanics are heightened by an abrasive edge of black metal, lending an almost industrial feel to everything, before a lengthy instrumental break focuses heavily on pneumatic rhythms and a classic metal lead guitar break. By then dropping into pure doom delivered at a funereal pace, Cult Burial appear to revert to expectations, but a heavy layer of relatively melodic guitar helps make the slow and oppressive sounds more interesting, before some pure black metal mechanics create something of a frightening climax. There’s a song in here somewhere…but, in some ways, it’s best not to cling on to anything for too long; this works much better if you approach it as a collection of great extreme metal ideas strung together as a CV of everything Cult Burial stand for. It’s bloody epic, to say the least – and if you had even a passing interest in their debut you’ll certainly have endless fun navigating the musical twists here.

Due to a reduced playing time, ‘Parasite’ will be more palatable for first time listeners. The bulk of the track centres around sludge metal and old school death metal tropes, but at the same time, you’ll find flourishes of other metal subgenres battling for your attention. It’s clear from the outset that this number has more of a standard groove, despite retaining many of the Cult Burial intensities. The first half of the track unleashes some great extreme metal underscored by a terrific bass sound from Rick, but there’s a classic riff awaiting at the three and a half minute mark, when guitarist Simon unveils a slow and oppressive chord progression that’s made of the purest doom. The effect of hearing this for the first time is to experience something that could crush everything in its slow and cumbersome path. Sure, Cult Burial are capable of being more inventive, but in terms of sheer heaviness, this could be the EP’s defining moment. Using that riff to slowly build tension, the band eventually deliver some traditional death metal brilliance with a world of pneumatic drums colliding with Cesar’s vocal growls, leading into ‘Paralysis’, a thrash/death hybrid that takes elements of early Sepultura, Carcass and Meshuggah, throws them into a grinder and comes out sounding more intense. Simon’s use of contrast between dirty riffs and clanging, cleaner notes gives a jarring effect, but it’s brilliantly used to challenge Cesar’s vocals throughout, resulting in a perfect thrash/death/black metal crossover that’ll appeal to most fans of such extreme styles. In some ways, it feels a little pedestrian after the first two numbers, but in terms of really tight metal, it’s impeccably played, creating a real treat for fans of the style.

This is a difficult listen, yet at the same time, there’s something that seems to draw the listener’s ear into every intensive riff and every oppressive rhythm. Cult Burial’s take on extreme metal sounds is deep and also progressive, meaning that even the more unrelenting elements are contrasted by a sprawling darkness and an imaginative streak that so many death/black metal bands lack. If you’re looking for something that carries some of that old Carcass magic, but is unafraid to wander through bits of early My Dying Bride, Meshuggah and Vehementor along the way, then this is definitely worth seeking out. Far more than the sum of its influences, ‘Oblivion’ is the kind of recording that takes Cult Burial forward in a huge way and, in extreme metal terms, suggests a musical future without boundaries.