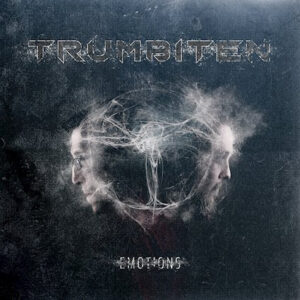 Like most Swedes, however, Tommy Angren and his son Adam take their metal very seriously and their debut EP ‘Emotions’ – constructed from original self-penned material and featuring a variety of vocals – not only showcases them as great musicians, but two guys also more than capable of wielding some great riffs and massive grooves. The lead track (and in some ways the EP’s strongest offering) ‘Beast of Fire’ opens with a genuinely epic sound, where eastern influenced riffs quickly take hold. aHaving set those in place, things are then built up with some cool multi-layered guitar work, before everything takes a dramatic left turn. The expected even heavier sounds give way to a far more melodic brand of old school metal, but his is just as cool in its own way, especially once Trumbiten begin to mix riffs from Trivium’s ‘Crusade’ album with some well arranged harmonies. The featured solo shows off a brilliantly retro tone, further accentuating the band’s old fashioned tastes, and the way this collides with a more modern and very chunky sound, gives a further insight into a great crossover sound. By the time the track pulls towards its climax, a more jagged approach to a rhythm driven by some taut drumming combined with an unexpected call and response dual vocal hint far more at a love for 90s progressive metal, but even with this slight shift in tone, the track remains particularly focused.

Having set the tone, ‘Sleepwalk’ opens with more melodic metal lead guitar work before dropping into a jagged riff with a more modern tone and a higher registered female vocal lends a very different feel throughout. Even though the music remains familiar, this very much suggests that Trumbiten aren’t keen to be easily pigeonholed, and although possibly unintentional, the youthful approach to the performance makes the track sound like a strange hybrid of early Bullet For My Valentine, Trivium and Thundermother. Working through the four minutes, the band serves up more fine metal, with a decent crunch and even stronger chorus. The use of more than one voice throughout gives the track more weight than before, while a couple of unexpected growls and a couple of heavier interludes offer something even more aggressive without detracting too much from a great tune. Finally, ‘In Pain’ teases with a vaguely Metallica-like riff overlaid with shrill twin leads, before exploring a mid tempo chug that allows the guitars and drums to power a melody with a fair amount of weight. As with ‘Sleepwalk’, the use of female harmonies often gives a great melodic contrast with the heavier elements, and although the end results often sound like the heavier, more Euro-centric output from Frontiers Records, there’s plenty within Trumbiten’s DIY approach and chunky sound that actually does a smarter job. By the time an all too brief lead guitar fills a few bars with a classic metal solo, Trumbiten’s all round confidence should be clear for all to hear.

If you’re the kind of metal fan that expects groundbreaking sounds from all your new musical discoveries, there’s not necessarily much here that fits that remit, but it’s all excellently played: the production values are crisp; the riffs are huge, and Trumbiten’s collective ear for a decent melody is without question. The invited guest vocals also give the material a varied sound and a couple of the hooks have the potential to stick, ensuring that ‘Emotions’ has plenty of appeal that’ll trump originality every time. As far as heavy but very melodic metal is concerned, this is great – a highly recommended listen.