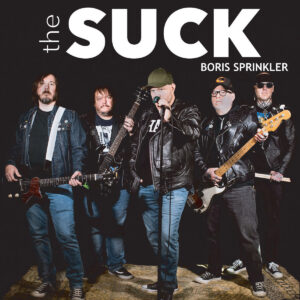 The lead track ‘The Theme’ throws an instant curveball by being introduced by a spoken word piece that sounds as if it were delivered by someone coked up at a retro frat party before crashing into an instrumental workout. Although kicking off a punk disc with an instrumental isn’t too common, it isn’t uncharted territory. In fact it more than suggests that someone in The Suck had been inspired by a couple of old Queers discs before heading into the writing/recording sessions. The core riffs sound like a wonky version of Ramones’ ‘We’re A Happy Family’ and the feeling of a classic punk tempo is set in place immediately, so, lyrics or not, The Suck reassure their potential listeners that some classic sounds are about to unfold. Unfortunately for the first track proper, the lyrics are so rampant with outdated mysogyny you might wish the mic had remained switched off. The first verse uncovers plans for a lads’ party and its all pretty juvenile stuff for grown men to be obsessed with, but the second appear to recount a friend finding a girl passed out in the street and bringing her back and…well, it all seems rather unpleasant. Chuck in a chorus where one line repeats the title, and you get the feeling The Suck could do better. Luckily, it’s half rescued by a great musical arrangement where a basic Ramonescore structure is beefed up with a bit of extra chug. This shows how The Suck know their way around a great melody almost instinctively.

‘No Bingo! All Nerds!’ takes the previous style and builds upon it by adding more of a punk ‘n’ roll toughness, but more importantly brings a little extra variety by introducing a variety of different vocals. While it’s fair to say that not all members of The Suck are blessed with the strongest voices, the contrast between the slightly brattish lead an a harsher counter vocal (often sounding like a more restrained JJ Nobody) and its more tuneful counterpart is quite striking, and bringing the whole band in for a rousing gang vocal adds a genuine climax. Lyrically, its business as usual, with the band offering a different insight into friendships, basements and geekery, but the track’s fascination with gaming and “twenty sided dice” will definitely play better with a mixed audience, while ‘Hash On The Dash’ trades in The Suck’s fascination with beer and porn for a tale of a trip across town. This involves a scenario of soft drugs and friendship set to a tune that sounds exactly like something pulled straight from Screeching Weasel’s ‘How To Make Enemies’. Although it in no way stretches any of the band’s natural talents, it still results in a couple of minutes’ worth of high octane fun.

The better material is less puerile, and a particular highlight ‘I Told You So’ sounds like a direct lift from the legendary Dan Vapid thanks to the use of a slightly filtered vocal and the kind of riff The Cheats would steer to glory. Although generic, it shows a band who are capable of musical tightness and serving up a timeless pop punk melody, while the almost as strong ‘Fantasy Beer League’ sounds like an old Ramones tune from ’78 hijacked by Diesel Boy. Its insanely repetitive hook places it in the top tier of The Suck’s basic take on the genre, but the clean and clear riffs that power the instantly familiar energies are certainly among this album’s very best. Sticking with the formula, ‘You’re Not Home’ could be interchanged with any number of 90s Ramones obsessives, but sounds closest to The Queers fronted by a higher pitched, over-enthustic frontman. Although this album offers a couple of stronger songs, by not trying so hard to shock/amuse, this track finds itself at the more enjoyable end of things, despite the generic feel throughout.

Elsewhere, ‘Jug Jackets’ works a fierce Ramonescore riff against a more melodic vocal and a should-be-clumsy spelling chorus, which would already be one of the album’s genuine highlights due to its strong rhythm and lead guitar combo. The fact that the complex hook actually works more than sells the piece. ‘(I’m A) Secret Agent’ bashes through a minute and a half’s worth of Queers/Weasel styled punk with a wobbly vocal delivery which is never destined for classic status, but if you’ve stuck with The Suck this far – for good or bad – you’ll find something to enjoy. Taking up approximately one fifth of the overall playing time, the closing number ‘J Prozac On A BMX Bike’ finds the band really stretching out by adding more of a hard edged power pop influence. Several ringing lead guitars almost sound as if the legendary John ‘Jughead’ Pierson has stepped in for the session – something of a plus – while the wider musical canvas also allows the lead vocal to experiment with something far more melody conscious. The less jagged vocal delivery is the perfect compliment to the lead guitar that, by the time a great – and surprisingly understated – chorus rolls around, it can still be heard adding a fine countermelody to the main riff. In terms of a punk and power pop hybrid, you won’t find much better – it’s easily The Suck’s best recording.

When an album clocks in at a fraction over twenty minutes, there’s no time for filler or undesirable elements that call for the skip button to be deployed, but unfortunately, there are a couple of numbers here that really let the side down. Fortunately, though, when ‘Boris Sprinkler’ is good, it’s very good and ‘I Told You So’ and ‘You’re Not Home’ more than suggest that The Suck are capable of punk greatness when they really try. Scaling an even higher high, ‘J Prozac’ even suggests that they could even slide into something more commercial without alienating their fanbase if they so wished. Although hit and miss, if you’re a massive fan of the Ramonescore style, this is worth the price of a download based on its three or four best songs. Whether you’re likely to get long term enjoyment out all of what’s on offer, however, is somewhat debatable.