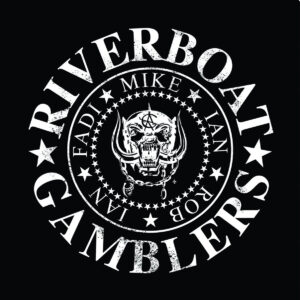 It may come some nine years after The Riverboat Gamblers’ last full length album, and a lengthy five years since the release of their last 7” single, but this comeback disc from the Texan punks is everything fans could hope for. Not only does it capture the band combating a selection of great riffs at full pelt, but it comprises material that even a non-fan would recognise a mile off. It’s a win-win on all fronts.

As more than hinted at by the title, this release features the Gamblers turning their hands to covers by the legendary Ramones and the just as legendary Motorhead. Two bands that seem quite different, and yet, are great bedfellows due to their love of speed and simple, direct riffs.

Choosing something from slightly later in the Ramones’ catalogue, the band’s take on ‘Bonzo Goes To Bitburg’ comes with a heavy, fuzzy riff that pushes Fadi El-Assad’s guitar to the fore, creating more of a punk ‘n’ roll vibe, while frontman Mike Wiebe adopts the perfect croon. With an ugly keyboard solo, a selection of gang vocals (including CJ Ramone himself) and a punchy drum sound, it all ends up feeling more like a knockabout Misfits tribute than the expected Ramones love, but with everything well played, the performance holds up extremely well. It has nothing on the other offering, though, since the combination of The Riverboat Gamblers and Motorhead’s brilliant ‘No Voices In The Sky’ (from the classic ‘1916’ LP) results in a fantastic slab of overdriven punk rock. Following a burst of feedback, a heavily distorted guitar leads the charge, occasionally making ‘No Voices’ sound a little more like ‘Bomber’. Hammering through the first verse into a brilliantly shout-along chorus, the punk ‘n’ roll aesthetic is huge and Mike sounds as if he’s having a blast chewing through the sneering lyric. The featured guitar solo could easily be Phil Cambell from the original cut with its equal footing in both a melodic metal style and almost bluesy melody, but the lead work takes a new twist for the coda with the introduction of an almost Fugazi-like distortion. It’s a great touch that shows off the Gamblers’ own musical skills without drawing too much away from the Lemmy legacy. Shorn of Lemmy’s trademark “Rickenbastard” bass, the song was always going to sound different, but the replacement of that bass with the guitar riff is a masterstroke – enough to make this truly work on its own terms – and in terms of aggressive rock ‘n’ roll, this band are certainly firing on all cylinders.

It’s safe to say that if you’ve followed The Riverboat Gamblers’ career previously, you’ll more than welcome this release. It’s even fair to suggest that if you love punky cover versions, you’ll be keen to hear this. If you love Motorhead, Ramones, or likely both, you’ll definitely want to give this a spin. It may only be a two song stop gap – although if previous form is anything to go by, it could be a very long gap – but it manages to tick so many boxes, and for pretty much everyone within a broad target audience. Covers need not be a cheap cash in, or merely hacked out, and this more than proves it. A brilliant return in every sense.