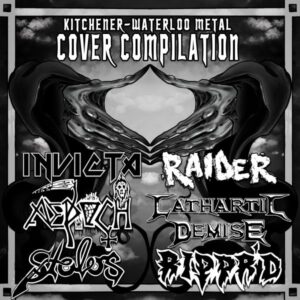 Kicking off the compilation is a special recording where various members of Ripper’d, Cathartic Demise, Raider and Aepoch club together – charity single style – and apply their talents to Judas Priest’s ‘The Hellion/Electric Eye’. The opening fanfare of ‘The Hellion’ is played absolutely straight with a world of tightly played twin lead riffs that are given a huge 80s style send off, before sliding into ‘Electric Eye’, where things get a little more interesting. At first, it sounds as if this will also be played very much verbatim, especially since the core riff actually sounds like a direct lift from Glenn Tipton’s original take. However, with the arrival of the first vocal, the mood changes rather sharply. Hearing Rob Halford’s “metal god” screams replaced by a Randy Blythe-esque growl is at first disorienting, but given time to settle, it works fairly well and even gives the riffs an extra kick. With a selection of vocalists each taking a verse, this is truly a collaborative effort and by peaking with Aepoch’s Brett MacIntosh sharing a black metal husk, it effectively brings the world of trad and extreme metal together, giving a further insight into the rest of this compilation. As the track plays out, the assembled bands give their all, but the real thrills definitely come from a couple of twin lead breaks and well executed solos that are essential for any worthy Priest tribute.

Cathartic Demise opt for Megadeth’s ‘Good Mourning/Black Friday’ double whammy which more than allows guitarist Taylor Wroblewski plenty of scope for soaring notes during the first part of the track and a full on shred during the second. Since both are approached with far more precision than Chris Poland, it really makes this worth hearing. To begin with, frontman Bennett Smith seems a little too keen on emulating Dave Mustaine’s vocal, but it’s all a ruse… Once the ‘Black Friday’ section gets underway, this band are utterly unafraid to make it their own by transforming the late 80s speed/thrash banger into a full scale hardcore assault. The riffs come at breakneck pace and the pneumatic drumming suggests more of a death metal undertone. With Bennett also trading in all expected melodies for a full on growl, this is almost unrecognisable…and all the better for it.

A slightly muddy sounding live recording from Stolos presents ‘Leave Me In Hell’ by Venom in a lo-fi fashion that would surely please the old Neat Records gang. The guitars sound as if they’re bleeding in from another room, the bass is hidden under reverb and the growling vocals are all very indistinct. In other words, it sounds like an early Venom recording. Despite the all round lack of fidelity, it’s hard not to be impressed by the sheer speed and force of the performance, especially since drummer Greg Carvalho (also a member of death metal band Aepoch) plays like a man with three legs. Turning the attention back to classic thrash, Ripper’d offer a tight rendition of Exodus’ ‘Toxic Waltz’ which showcases several superb, deeper sounding riffs and a classic bass drum sound, while an unexpected Biohazard inspired hardcore vocal offers a brilliant contrast from the original’s almost comedic squealing. Ripper’d also have the edge via a much better production job than Exodus could afford back in ’89 so, in terms of covers, this is a winner on all fronts. Between its tight performance, improved production values and a band daring to actually make the track their own, it’s a definite highlight of this collection.

Raider’s decision to cover a Demolition Hammer song shows a real love for the death metal scene. Even at their peak in the early 90s, Demolition Hammer were overlooked by most, perhaps due to being plagued by bad press. Regardless, Raider’s rendition of ‘Carnivorous Obsession’ give listeners a decent slab of semi-melodic death metal. A slow opening riff occasionally sounds like one of Slayer’s most threatening mid-tempo affairs – a great showcase for guitarist Gabe Rosa – before exploding into a full on barrage of pneumatics. Raider avoid sounding too generic by mixing the two alternating styles (as dictated by the Demolition Hammer original) and also including a more interesting vocal. Frontman Angelo grabs the performance with both hands and wrings it for everything he can, and his decision to alternate between semi-melodic death growls and a far more black metal oriented rasp always keeps the listener on their toes. In clocking up almost six minutes, it can be hard going, but thanks to the inclusion of a deeper bass sound providing more warmth than Demolition Hammer ever had, it’s actually better than the original. A second dose of extreme metal is supplied by Aepoch’s faithful version of Death’s ‘Trapped In A Corner’. A fantastic track from the later part of the band’s catalogue, ‘Trapped In A Corner’ is a perfect example of Death’s growth from a straight death metal/extreme band to a progressive powerhouse, without losing their extreme core. Bringing four minutes of tightly wound riffs, these Canadian lads prove to be pretty much as good as any extreme metal band you’ve heard, tackling Andy LaRocque’s complex progressive metal inflected riffs with absolute precision and navigating the unexpected rhythmic shifts with a genuine ease. As is often the case, the vocal can be a little intrusive, but if you can make it past that, the dancing twin lead guitar sounds, fretboard melting solos and occasional dalliances with riffs that draw from as far back as the NWOBHM are all superb. For fans of the original cut, this will surely make an interesting alternative, and for the unfamiliar, perhaps it’ll provide the inspiration to backtrack to Death’s 2011 album ‘Individual Thought Patterns’ – definitely a journey worth taking. [Aepoch’s 2020 EP ‘The Scryer’ is also a highly recommended listen for the more discerning death metal fan.]

A lot of metal buffs will find at least one track here they’ll really enjoy, but perhaps the most broadly appealing cover comes from Invicta, who bravely take on the Iron Maiden classic ‘Killers’. It’s always good to experience a band championing the Paul Di’Anno era of the band, and in terms of song, Invicta have picked one of the true greats. To kick off, they take the melodic intro and play it utterly straight, quickly advertising Kyle Edissi and Jonah Kay’s gifts with a twin lead. Moving into the meat of the track, the bass cranks up the intensity by playing Steve Harris’s legendary gallop with even more force, while Kyle offers a vocal that would suit a groove metal outfit. After decades of loving Di’Anno’s punk-inflected attack, it can be unnerving hearing the lyric delivered with a full growl, but in many ways, that angrier stance is very much in keeping with the perilous subject matter. By the time the band reaches the instrumental break, their technical thrash roots inject even more energy into the sharp trad metal melodies, making this a cover that’s both inventive and respectful.

Ignore the lack of inventive title. Pay no heed to the threepenny costs of the (non existent) artwork. It’s the tunes and performances that count, and the ‘Kitchener-Waterloo Metal Cover Collection’ offers the best of both worlds – a couple of tracks you know inside out, redressed in new clothes, and a fine introduction to a handful of Canadian metallers who are more than keen to expand their audience. These bands certainly give their all here, and if any of the recordings inspire people to head to Bandcamp to see what else is on offer, then their work is done.