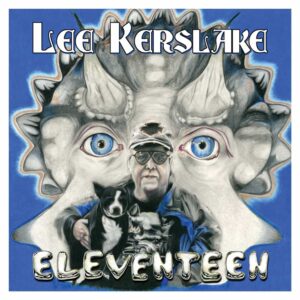 Lee Kerslake will be best remembered as the man who drummed on several Uriah Heep albums and occupied the drum stool on Ozzy Osbourne’s 1980 LP ‘Blizzard of Oz’. Those works eventually earned him legendary status among two generations of rock fans. For Lee, it wasn’t enough: he’d more than proved his mettle as both hired hand and full time bandmate, but he yet to put his name to a solo album. That final piece of the musical puzzle began to slowly take shape in 2015 and with sessions taking place sporadically over the next few years, Lee’s solo debut became a reality in 2019. Like most solo albums made by rock drummers – excepting the extraordinary body of work created by Phil Collins – ‘Eleventeen’ (finally released in February 2021) isn’t what you’d call a world beater.

The most striking thing about the whole record is Lee’s kitchen sink approach to musical styles. You might expect him to be the driving force behind one final, no-nonsense rock album, but the material shifts wildly between relatively easy listening singer songwriter fare, to quirky pop rock, to grandiose instrumental moments and back again. Regrettably, at the heart of it all there’s a man who really can’t sing. He just about gets away with that on set opener ‘Celia Sienna’, where he pays tribute to his wife, since he isn’t required to stretch his obviously limited range too much, and is ably helped by a choir of backing singers where necessary. Musically, it’s rather more Gerry Rafferty than Uriah Heep, but none the worse for that. Acoustic guitars underscore subtly played electric leads, while a blanket of keys fleshes out the sound creating an almost timeless AM radio mood. When bolstered by big harmonies, Kerslake sounds at his most comfortable in this musical guise. There’s little excuse for the pan pipe keyboard that arises on the chorus, but it doesn’t spoil the album’s best track too much. ‘Where Do We Go From Here’ will, perhaps, give fans something more within their comfort zone, thanks to sounding a lot like one of Uriah Heep’s underrated works from the 90s. A mid tempo arrangement provides a reasonable send off for a hard, simple riff that carries everything, while the downbeat mood suits an equally simple hook. Although nothing here manages to rise beyond workmanlike, between a sharp and concise guitar solo adding a little extra interest and Lee sounding relatively confident, it holds up well enough.

Beyond that, unfortunately, ‘Eleventeen’ wavers between average and terrible, rarely summoning any music that even the most die-hard fan would find especially interesting. ‘Take Nothing For Granted’ – another tribute to Lee’s wife – opens with an Asia-esque intro where sweeping keyboards suggest greatness (albeit small budget greatness), before descending all too rapidly into a stodgy rocker that values force over style. There are moments where this actually sounds okay – a well played lead guitar helps save face – but, in the main, a simple stomping rhythm played at mid tempo proves disinteresting at best and a woeful performance from Kerslake suffocates the tiny bit of melody the arrangement actually had. There’s no easy way to say it, but four minutes of Kerslake bellowing relentlessly creates a painful listen. ‘You May Be Yourself’ is actually worse, once Lee decides to tackle something that sounds like an old Johnny Logan ballad with all the subtlety of an elephant. The themes of love are universal, but the recording and performance are absolutely shocking. The music’s arrangement and production sounds synthetic – almost karaoke machine standard – and Kerslake’s vocal could well be the worst you’ll hear from a professional musician in a long while. In a world where Dave Cousins sounds like a weird goblin on parts of the Strawbs’ ‘Settlement’ LP (released on the same day), that’s quite some achievement…

If you think it couldn’t get worse, it’s worth noting that nobody really needs to hear Lee grumbling his way through Carole King’s ‘You’ve Got A Friend’ in the manner of an average bar room crooner, or be subjected to the embarrassment of ‘Port & A Brandy’, a nasty faux cockney knees up at a pub joanna where Lee falls into a musical hall mire somewhere between the worst examples of Chas & Dave’s ouvre and one of ELP’s novelty efforts. …And yet here they are, really not helping ‘Eleventeen’s cause. On top of that, there’s ‘Mom’ – an instrumental that, at best, sounds like new age music for a 1980s hotel lobby, and ‘Home Is Where The Heart Is’, a bog standard melodic rocker that wouldn’t gain the time of day if it had been offered to a reputable record label by an unknown act. Granted, a half-decent riff makes it better than the bulk of this album, but forgettable songwriting and an awful vocal ensure one listen will be enough for most people.

With all of that said, the real purpose of ‘Eleventeen’ goes beyond merely being a bunch of songs for people to listen to and enjoy…or not. In some ways, actually listening to it feels like intruding on a private project. The physical act of making the record obviously made Lee happy and probably gave him the spirit to keep fighting against the cancer that would ultimately end his life. That alone means it wasn’t ever time wasted, regardless of the results. The recurring themes of home, family and love throughout this album can be easily understood, as can Lee’s reasons for wanting to get these final songs on tape. It might have been better had he kept the recordings private, though, as a goodbye to those much closer to him.

If you’re somehow approaching this hoping for an enjoyable or interesting final work, it’s probably best to avoid this rather painful swan song altogether and dive into the past to remember “The Bear” at his best. Raise a glass to him while listening to Uriah Heep’s ‘Demons & Wizards’, ‘Firefly’ or ‘Abominog’; sing along to Ozzy’s ‘Crazy Train’ and ‘Mr. Crowley’ at the top of your lungs. Maybe even rediscover Toe Fat or Living Loud. There are so many suitable ways to express your love for this rock legend. Just don’t expect ‘Eleventeen’ to be an especially enjoyable experience.