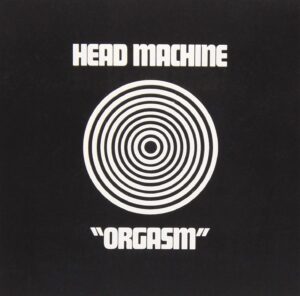 As the newly-Christened Head Machine, they came, they saw…and they lost. Their one and only album, the unfortunately titled ‘Orgasm’, failed to get any major attention and the band split soon after. ‘Orgasm’ – like the albums released by The Open Mind, The Spirit of John Morgan and Elias Hulk – has latterly gained more fame for its rarity value than for any of the music it contains. This is a pity, as within its forty minutes, there’s some brilliant performances to be found. While only a couple of tracks could legitimately be called heavy by the standard of the era, it’s often possible to hear the old Gods at least attempting something new and more forceful, pushing a couple of new musical boundaries as they go about their business.

The double whammy of ‘Climax/You Tried To Take It All’ provides a great opening statement. During ‘Climax’, heavy garage rock riffs drive a sound that’s not a million miles away from Ten Years After and The Groundhogs, while extensive lead guitar howls tap into a fury that could occasionally match the young Ritchie Blackmore at his own game. This is not just an exercise in over-driven, macho muso fantasies though: between the angrier elements, a vocal that sounds like an overhang from the previous decade adds a huge amount of melody, with a multi-tracked, echoing sound while John Leadhen’s bass lends the arrangement a very busy, almost jazz-like element. Shifting into ‘You Tried To Take It All’, everything becomes more pointed and simplified, but witnessing the band hammering through a no nonsense twelve bar boogie, you get the feeling they’d have been a natural force on the live circuit. And if you somehow think there’s nothing worth getting excited about between a set of meaty chords and chunky vocal, just remember – at the time Head Machine were in the studio recording this, The Doors hadn’t yet released ‘Roadhouse Blues’ and it’d be another eighteen months or so before Status Quo would take this kind of piledriving sound to the masses.

More of a throwback to The Gods, ‘Make The Feeling Last’ offers some decent rock-pop in a Moody Blues meets ‘Bare Trees’ era Fleetwood Mac mould. Layered harmonies evoke the Moody Blues and the Hollies, before the track slides into a gorgeous bluesy pop melody where both the guitar lines and David Paramor’s vocal style scream influence from Kirwan. It’s almost hard to believe that such a beauty could come from the same musicians who’d hammered out Quo-like riffs only moments earlier; it has such a heart-wrenching melody and warmth, it’s hard to imagine something so brilliantly crafted would have all but sunk without trace in the early 70s. For lovers of late 60s vocal harmonies, it’s a must-hear. With a more theatrical bent, ‘The Girl Who Loved’ places a high tenor vocal above jazzy guitar lines (flawlessly played by Ken Leslie), a solid Hammond organ sound (again, supplied by Leslie) and another complex bassline. More than a mere throwback to the Gods days, it can certainly be claimed that Head Machine are looking forward to the 70s with these experiments mixing jazz rock and prog. Musically, it takes a little longer to appreciate than most of the album’s tracks, but the interplay between Leslie and Leadhen is stunning throughout – definitely impressive enough to warrant close attention. Several listens later, this once slight and arty piece becomes another of the album’s standout performances.

Stretching out to nine minutes, the title track is a centre-piece in every respect and is as much a showcase for Leslie’s guitar work as Paramor’s vocal prowess. A wall of feedback leads into a stomper of a groove that not only takes the core sound of the late 60s blues rockers, showing off some of Head Machine’s tougher elements, but like the earlier rocker captured a proto-Quo, this foreshadows another future sound by almost pre-empting a glam-ish swagger. Paramor’s moments in the spotlight often show a man keen to imitate David Byron and it’s probably better to not pay too close attention to the lyrics (“I told you I’d give you such delight” is merely the tip of the misogynistic iceberg), but even so, it’s a performance with a genuine presence. He’s outshone at almost every turn by Leslie’s guitar work, though, where several passages of melodic blues rock show off a great player whose distorted leads suggest he was a huge fan of Tony McPhee. The manner in which he uses distortion and feedback to weave shapes in and out of a strident melody is actually more subtle than it could have been, but by the time the track really hits his stride and the volume increases, the heaviness intensifies and the speed cranks up to explosive levels. Throughout the whole track, Leslie sounds like a man truly at one with his instrument. His best aggressive moments aren’t even derailed by Paramor faking an orgasm – a pointless display that could never rival Robert Plant’s best – or Lee Poole’s heavy drum sounds.

As much of a tour de force as that may have been, Head Machine are at their finest when these recordings allow for something more song oriented, regardless of whether they’re opting for something in the then new and heavy style or harking back to late 60s weirdness. In terms of massive riffs, ‘You Must Come With Me’ comes up trumps by flaunting a Groundhogs’ inspired riff which, bizarrely, pre-figures a couple of genuine rock classics, stylistically speaking. Leslie’s choice of riff includes elements that appear to indirectly inspire both Edgar Winter’s ‘Frankenstein’ (1973) and Whitesnake’s ‘Ready An’ Willin’ (1979). When thrown into a package where a bombastic vocal tries hard to outdo such a huge guitar sound, it’s also easy to draw obvious parallels with this and Uriah Heep’s core sound of the time. The lyric that shamelessly wanders between old acid flashbacks and a shameless sexual overtone is certainly…of its time, but thankfully, it doesn’t kill the fantastic overall sound.

Another highlight, ‘The First Time’ adds far more of a pomp driven sound to the band’s brand of hard rock, with Leslie dropping huge slabs of Hammond organ against a busy bassline and howling blues guitar. Occasionally, the introductory melody sounds as if it might slide into ‘Thank You’ from Led Zeppelin’s not long released second LP, but takes on its own style once Paramor offers a brilliantly theatrical rock vocal. There are traces of the young Gillan in the way he’s never shy of longer, vibrato-fuelled notes delivered at volume, but as always, its a shift into close harmonies bolstering a fluid bass-led melody that show Head Machine at their strongest. Finally slipping back into the introductory melody, there’s little doubt that this piece of 60s inspired rock resembles a “rock classic”. Finally, the short ‘Scattering Seeds’ blends garage rock, proto-metal and shrieking pomp seamlessly. In terms of 60s overhangs, Paramor’s choice of vocal style and melody seems especially on point – a few plays marks this out as another lost classic of 1970 – and as with so many of the other numbers, Leslie’s command of a riff is without question. Once you factor in Leadhen’s upfront bass style and a drum groove that serves Head Machine well enough, it comes as somewhat of a disappointment when they choose to close a well-crafted track – and largely enjoyable LP – by shamelessly ripping off the last section of ‘Whole Lotta Love’. If this LP has shown anything at all, it’s that these guys were great musicians, and even when taking obvious influences, they often managed to create something that seemed new and distinctive for the time. This obviously clunky pastiche is the last thing you’ll hear and in many ways, it ends the album on something of a sour note. You shouldn’t let that dissuade you from seeking out this lost classic, though – the good far outweighs the bad throughout this LP’s thirty six minutes.

Upon its original release, ‘Orgasm’ may not have aroused the rock audience in any meaningful way – that’s largely the fault of Major Minor records lacking a decent distribution than Head Machine not being up to the task – but their story was far from over. Following the album’s failure, Ken Leslie and Lee Poole moonlighted with Toe Fat before Leslie found fame with Uriah Heep, reclaiming his real name Ken Hensley along the way. He was subsequently being re-united with Poole (aka Lee Kerslake) in 1972 when Lee finally put an end to Heep’s inability to keep a stable line up. Later in the decade, John Leadhen would find fame as John Glascock, one of the finest bassists Jethro Tull ever had. Despite an array of talent, Head Machine seems to be little more than a footnote in the combined musicians’ career legacies. So many decades on, it’s really time for that to change…

[After spending years out of print on vinyl, or only available on unofficial CD repressings, ‘Orgasm’ was given its first ever official CD release by Cherry Red Records in October 2020.]