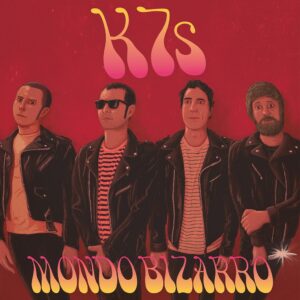 When K7s debut album ‘Take 1’ appeared in 2018, it presented itself as an instant classic. In the middle of a pandemic of emo inflected punk, and a bunch of pop punk releases that had too much focus on the pop, the US/Spanish combo gave everyone a perfect reminder of the punk sounds they loved in the 90s. Its half an hour packed in riff after riff, drawing from Ramones, Screeching Weasel and The Apers, quickly setting itself up as an unmissable disc.

The world waited for ‘Take Two’. …And waited. Then, finally, at the beginning of 2021, the band returned with a new work, but fans would still be left waiting for a new disc of self-penned bangers.

Instead of the expected new songs, ‘Mondo Bizarro’ taps into the age old tradition of the covers album. But not just any covers album: as suggested by the title, the second K7s LP is a complete reworking of the Ramones’ 1992 release. With Kurt Baker handling all lead vocals, it becomes of chief interest to all lovers of the first K7s LP and Kurt’s own work. The Ramones angle also promises to attract an audience of listeners who’ll approach it purely out of curiosity. Although there’s a small disappointment that fans aren’t getting new K7s songs as such, from the band’s perspective, this release is a win on all fronts.

As you’d expect, tackling a Ramones LP is almost second nature to these guys. Approximately one verse into ‘Censorshit’, it’s clear why Kurt and Luis Sanchez have swapped vocal roles: Baker’s curly approach and occasionally affected croon becomes a dead ringer for Joey in places. While clinging on to his more familiar power pop stance in others, the push and pull between the two styles whips up a reasonable amount of excitement here. Musically, it’s played exactly the same as the Ramones’ original: the guitars have a tough edge but retain a great, melodic punk approach; the drums really punch, and Baker seems to relish every opportunity to curl his voice around the more melodic chorus hook. A similar approach drives ‘Strength To Endure’; a great showcase for Luis’s lead guitar chops, it affords K7s a more melodic vehicle than any of their own work, thus showing off their abilities with some fine rock-pop within a punky framework. The original cut could never be considered anything like the most memorable Ramones tune, but the opportunity to hear these cult heroes claim the track for their own proves a very satisfying experience.

There are few people in the world who’d ever choose ‘Cabbies On Crack’ as their favourite Ramones track – it’s certainly among the band’s more forgettable recordings – but the K7s treatment of it definitely deserves attention. Tackling the mid-tempo rock riff, Luis wields a really tough guitar sound throughout; the occasional use of reverb lends an extra edge while Baker chugs at his bass in a way his own material rarely allows. In terms of massive punk rock, it’s a great performance. Although the original version of ‘Touring’ never really raised itself above being a lazy rehash of ‘Rock N Roll High School’, the K7s recording is actually superior since its 60s pop pastiche elements and increased harmonies put Baker squarely within his comfort zone. During these two minutes, he sounds like he’s having a huge amount of fun and assuming you’re able to tap into the spirit of this tribute disc, there’s every chance you will feel suitably uplifted as a result. An obvious highlight, ‘Poison Heart’ captures some superb power pop sounds and although K7s don’t alter the source material in any way, it sounds even less like a Ramones song than the original recording even did. With a full compliment of ringing guitars and Baker going all out on one of Joey’s most pop derived hooks, this offers a really upbeat three minutes showing the band to be great musicians outside their punk norm, while ‘Main Man’ sounds a little tougher than the original, but still makes a great feature of Kurt and Luis’s abilities to harmonise. Naturally, this is something they’re able to do far more effectively than Joey & Johnny, even in their prime.

On faster workouts like ‘Anxiety’ and ‘The Job That Ate My Brain’, the K7s Ramonescore skills prove tighter than most. Although they’re working from some fantastic source material, their knack for tightly wound riffs is clear from the get-go. Whether you’re already a fan of the band or coming to them for the first time here, these are recordings that – more than making you want to revisit the original Ramones ‘Mondo Bizarro’ LP – should make you want to listen to K7’s ‘Take 1’ at a loud volume. On top of all of that, of course, listeners are treated to the K7s covering Ramones covering The Doors on ‘Take It As It Comes’, which rattles along at speed, showcasing Jose’s loud drum sound and allowing Baker to adopt a full scale croon. With an equal balance of punky cool and 60s kitsch, it’s a brilliant cover – and that’s even before reaching the last verse where the bass rings out with a massively fat tone, demonstrating an arrangement with a lot of muscle.

Given how many well known albums Joey & Johnny knocked up during their years together, the K7s’ choice of revisiting ‘Mondo Bizarro’ seems like an odd one. It comes almost at the end of a twenty year reign; it contains no massive hits, and doesn’t even feature anything by way of obvious fan favourites. Perhaps that’s why K7s picked it – it’s certainly the kind of record deserving of a revisit; the kind of long-player needing some re-evaluation and a bit more love. …And this recreation brings that love by the bucketload. An unexpected treat.