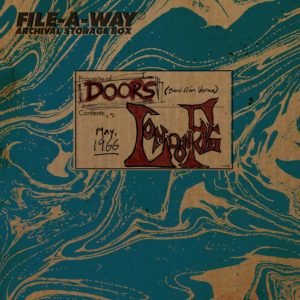 ‘London Fog 1966’ isn’t anywhee near as grand, in fact it only features seven actual performances and isn’t even a complete show, but being the earliest known Doors performance to exist, it’s historical importance cannot ever be underestimated. Here are the fledgling Jim Morrison, Robby Krieger, John Densmore and Ray Manzarek just a few months after forming – and some eight months before the release of their world-changing debut LP – in front of a small crowd applying their talents, in the main, to a selection of cover tunes. Being able to hear this at all feels like a miracle.

Despite some brilliant moments, however, things start off fairly slowly. After a brief tune up, the band slowly lurches into ‘Rock Me’, a blues number by Muddy Waters. Introduced by Manzarek’s organ, the arrangement is a little uninspired compared to some versions, and the organ actually feels somewhat intrusive at times, but that in itself hints at a sound the band would soon make their own. The reel-to-reel recording isn’t always the clearest source, often rendering Robby’s guitar non-existent, but given the crudity of the equipment and age of the recording itself, the overall sound is absolutely fantastic. Looking at the complete picture here – and this applies to the whole of the recording – the echo the drenches the vocal throughout really gives a feeling of an unfiltered source, while the loudness of Densmore’s drum kit definitely makes it much easier to imaging yourself inside the intimate venue.

From then on, most of the ragged performance present a Doors fans dream. Switching into high gear, the band absolutely thunders through ‘Baby Please Don’t Go’, with a huge swing from the drums. The mix is much clearer; here. Krieger’s bluesy runs pierce through everything, while an enthusiastic Jim Morrison barks and growls through the r ‘n’ b standard in a way that makes the “Angry Young Them” with Van Morrison seem shy and retiring. Although familiar to almost everyone, this performance actually gives something more than most, especially in the way Densmore and Manzarek gel musically. Even as the fairly lengthy workout shifts ever closer to its end, they never slip from the groove they’ve so quickly locked into. It’s brilliant; a must-hear for long-time Doors fans…and the same goes for the Morrison penned original ‘You Make Me Real’, where Jim barks “Come on and dance!” at the audience before leading the band through a rock ‘n’ roll belter where his vocal sounds untrained, unhinged and utterly uninhibited. It doesn’t have the cluttered or slightly funky elements of the final version from 1970’s ‘Morrison Hotel’, but it already sounds like a great live track. Equally brilliant, an early run through of ‘Strange Days’ demonstrates both a darkness and originality – an early glimpse of a proto-gothic sound ready to drive a stake through the heart of the still germinating peace and love scene. There are no massive differences compared to the recorded version from late ’67 here, but this only highlights further how clear The Doors’ vision was with regard to their own, original work.

The Pickett/Cropper number ‘Don’t Fight It (Feel It)’ doesn’t suit Morrison very well at all; his boorish croon strips the track of all of its melody, but between a parping organ and rigid drum part The Doors somehow make it work in relation to the rest of the set. This is a real eye-opener in that it shows how the band’s less than frivolous approach to music would be far better served by their own compositions. Working through covers for a nightly pay is fine, but everyone would come into their own (and Manzarek especially so) when given free rein. Dropping back into a straight blues, Manzarek dominates throughout ‘I’m Your Hoochie Coochie Man’; the full spectrum of his keyboard work renders Krieger inaudible throughout once again, but there’ll be almost no-one listening to him once Morrison hits his mark. Despite being younger, thinner and – presumably – more sober, it’s fascinating to hear how Jim’s performance sounds like a future echo of his ‘LA Woman’ era self. It’s a vocal performance teetering on the edge of dangerous. Finally, the band unleashes their own take on Little Richard’s ‘Lucille’. Without Penniman’s uninhibited shrieks and speed, it actually sounds more like a prototype Doors number. The way Manzarek’s keyboards carry the weight of the melody and Krieger adds various musical counterpoints almost makes this feel like a shift towards a more natural sound for the band. In that alone, it’s actually possible to hear something that reaches beyond a cover tune and hints at talents that would soon give the world the instantly distinctive ‘Break On Through’ and ‘Soul Kitchen’.

Allegedly, ‘Light My Fire’ and ‘The End’ were performed at this show but were not recorded. With that in mind, ‘London Fog 1966’ is only a snapshot of what was…and also of what this release could’ve been. Regardless of its incomplete nature and the final revelation that the audience sounds like it numbers twelve people, the feeling of excitement this recording gives is much the same as when the 1969 black and white footage of Led Zeppelin in Denmark appeared on TV for the first time in the late 80s. For the fans, it’s an essential collection filler, though to call it a “collection filler” is in itself doing the disc a massive disservice. There’s a joy in experiencing this well-known band at the start of a journey, and stripped of the bloated excesses of later gigs – without reams of poetry, Native American obsessions and ‘The Celebration of The Lizard’ – The Doors can seem like a very different beast, yet at the same time, Morrison’s defiant presence and Manzarek’s distinct organ work are firmly in place. Although still very much in their infancy, this early recording shows how much more intense The Doors were compared with your average LA bar band.

‘London Fog 1966’ is primitive, but it’s the most important archival find since the 2009 release of Tim Buckley playing solo in a New York bookshop. If you’ve ever considered yourself a Doors fan, you owe it to yourself to pick this up as soon as possible.