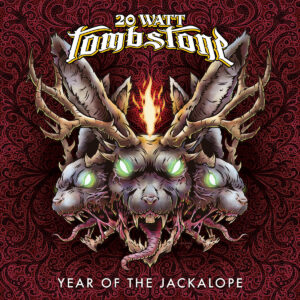 When you’ve made most of your reputation as a live act, it’s a massive blow when a global pandemic dictates that you can’t go out and deliver riffs to the masses. This less than ideal situation drove 20 Watt Tombstone back into the studio at the end of 2020, breaking a five year silence of recorded work. While the results aren’t exactly plentiful, they’re more than welcome, since this pair of recordings reacquaint listeners with their no-nonsense, self-described “death blues” sound and of their chief influences. ‘Year of The Jackalope’ brings together a pair of cover tunes delivered in dirty and typical 20 Watt style, acting as both a welcome return for fans and a brilliant introduction for others.

Chris Stapleton’s ‘Midnight Train To Memphis’ was an already meaty affair in its original recording, adding a southern rock slant to a hefty blues tune. If Stapleton managed to sound like the missing link between Stevie Ray Vaughan and Black Stone Cherry on that particular recording, then 20 Watt Tombstone set about redressing it in more of Black Label Society guise. The arrangement is intact, but in taking the groove laden riff and hammering it in a much darker and sludgier fashion, it sounds like the work of the ultimate fuzzy blues rock duo. The vocals are also distorted to suit – very much reinforcing the “live in the studio” approach always favoured by the band – but beneath the gruffness and the noise, it’s immediately clear that Tom Jordan is in great voice. Hearing the duo wring such a groove laden tune for everything its worth, adding a heavier drum part and reinforcing the original’s chopping Hendrix-ish guitar sounds along the way, is to hear 20 Watt Tombstone approaching something close to full power. Ir’s brilliant.

…But as enjoyable as that may be, it’s not as good as their cover of ZZ Top’s ‘Just Got Paid’ which comes loaded with incredibly dirty riffs, an unavoidably live drum and more vocal grit than most blues bands manage to deliver in a full album. ZZ Top have always been one of those bands with a decent selection of hits, but aren’t always that interesting once you start to scratch below the surface of their “proper” albums. There are a few decent tracks to be found, of course – not least of all this standout from 1972’s ‘Rio Grande Mud’ – but 20 Watt Tombstone instantly make Billy Gibbons and Dusty Hill sound more appealing by comparison. From the opening riff, Jordan’s playing is especially on point as he taps into fuzzy southern grooves, but by the time he reaches a very late 60s sounding slide guitar solo and then kickstarts the second half of the performance, he’s truly on fire. Again, there are hints of Black Label throughout, but there’s a greater understanding of what makes a heavy blues performance interesting once these guys hit their stride.

In just two songs, 20 Watt Tombstone show how blues doesn’t always have to be original to be interesting. Nor does the material; it’s all in the attitude, and these recordings have plenty of spark. Played loudly, it all sounds much better, of course. Despite often adding a metal based slant to their blues, this duo also clearly understands the importance of an emotive feel. They also show the utmost respect for the original performers at every turn. Perhaps they could give the Polish doom blues band Weird Tales a few necessary pointers?

There’s only one negative point regarding ‘Year of The Jackalope’ and – obviously – it’s that two new songs just isn’t enough. Still, looking at the positive, if it hadn’t been for a health crisis on a global scale, fans might not have been treated to any new music from these guys at all. Overall, this is a highly recommended listen.