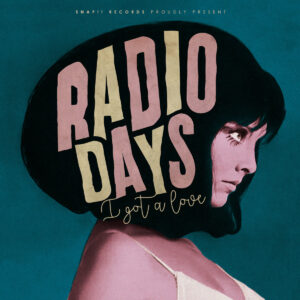 By the end of 2020, Radio Days still hadn’t made it to household name status, but had more than maintained their musical standards. They closed the year by issuing a three track EP that presented two great new songs with a well chosen cover. …And if the past has taught us anything, it’s that a brilliant cover tune can be an effective way of winning new fans. With that in mind, everything about ‘I Got A Love’ has the potential to make a huge impact in under ten minutes.

The title track serves up some instant familiarity by opening with a double drum beat that sounds exactly like the Undertones’ ‘Teenage Kicks’ – so much so that it could be a sample – before moving into a riff that blends muted chords and ringing guitars effectively, recalling the early 80s hits by Paul Collins’ Beat and Shoes, while suggesting an equal love for underground acts like Off Broadway and Kurt Baker. There’s something in the way Radio Days recycle this stuff that makes it seem entirely fresh and relevant, though: the guitar sounds are especially bright; the vocals aren’t shy in sharing a jubilant mood on the chorus and by the time they bow out with a round of shameless “la la la”s, there’s no doubt they’re masters of their chosen genre. One listen to this and it’ll become clear why the power pop scenesters have been so excited. ‘Baby Blue’ (not a Badfinger cover) offers a similarly high quality treat with a two minute belter that taps into a style that’s even more retro than usual. This performance melds the typical Radio Days power pop cool with a mood that sounds a little more like one of Showaddywaddy’s 50s pastiches. It shouldn’t be cool, but a set of jangling chords provide an instant musical hit, before a sugary vocal joins a bouncy rhythm, supplying the kind of performance that it’s impossible to ignore…or even pin a date upon. The full production values really helps it sound much better than something like this deserves to be, and between some great harmonies and a timeless sounding hook, the band add another retro hit to their growing legacy.

Last up, Radio Days take The Jam’s ‘In The City’ and show off a slightly tougher demeanour. They don’t change Paul Weller’s original arrangement – the razor edged rhythm guitars and punchy bassline are still firmly in place – but the pop derived vocal really helps this track to sound more mature. The performance in hand really showcases some great bass work and even with a heavy Italian accent there’s plenty about this recording that sounds geared towards the UK mod scene, both past and present. Sometimes a good cover requires a drastic reinvention to get noticed; sometimes it merely needs a warmer and bigger production sound. This recording definitely falls into the latter camp, but if you’re a fan of the original, its certainly worth hearing.

Three songs, seven minutes and out: there’s so much about this release that’ll leave listeners wanting more. However, it works brilliantly as an immediate adrenaline hit and each of the songs demonstrates just enough of a different side to Radio Days to remind people of a great band at work. Whether you’re a fan of old, or have heard the name Radio Days in passing and have been meaning to check them out, you’ll want this. Highly recommended.