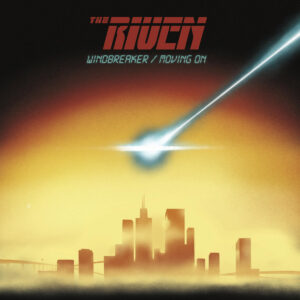 In terms of quality, The Riven’s self-titled record from 2019 was streets ahead of their debut EP. Although both releases are solid in terms of playing and song writing, the album vastly outshone the EP in terms of production values and vocal performances. This suggested The Riven’s third release had the potential for a few incendiary riffs. Although that third release turned out to be a two song stop-gap, in terms of old style sounds, both ‘Windbreaker’ and ‘Moving On’ (issued on a strictly limited vinyl in August 2020) really doesn’t disappoint.

Less 70s sounding than some of The Riven’s previous material, ‘Windbreaker’ tears out of the gate with an energy that seems very influenced by the early 80s New Wave of British Heavy Metal. In fact, there’s a lot at the core of this track that shares parallels with Saxon circa 1981. The opening riffs motor like the Paul Quinn and Graham Oliver; the featured lead break is powered by a whole world of very old fashioned squeals, intercut with a great melody and the multi-layered riffs creeping in at the end are a dead ringer for many a fantastic 80s metal banger, with more than a smidgeon of UFO at the heart. If it were unclear before, this is the kind of track that shows The Riven to be fantastic players, all. In addition to guitarist Arnau Diaz showing off a genuine fretboard attack, the rhythm section motors throughout, with bassist Max Ternebring showcasing some very taut playing. In many ways, this is also one of Totta Ekbergh’s most aggressive performances as she really wails, but thankfully she also seems mindful of a great melody whilst carrying off one of those old-school presences that never actually gets old. Despite boasting a title that’s decidedly Spinal Tap-esque (we can perhaps assume this stems from a translational hoo-ha), this is a superb track.

Although a little more metal oriented than some of The Riven’s previous material, more of the expected swagger returns for ‘Moving On’ (a track that received a digital release back in May 2020). A number more in keeping with their self-titled disc from 2019, it fills four minutes with some fine retro rock traits. The quieter moments find Diaz offering some brilliant bluesy howls, while its busier moments rattle along rather like Black Sabbath’s classic ‘Children of The Grave’. Whether offering a full on cry or reaching for a more metal infused scream, Totta is in great vocal shape.

Although a little heavier all round (albeit in an old fashioned sense), these tracks really show The Riven growing in confidence. Both are firmly geared towards listeners who love traditional hard rock riffs and both suggest a tour de force of live performance, despite being tailored in a studio environment. If you’ve enjoyed the band’s previous work, you really can’t afford to miss this (even if you have to make do with a download). Likewise, if The Riven are unfamiliar to you and old style rock still occupies part of your regular listening, this comes highly recommended.