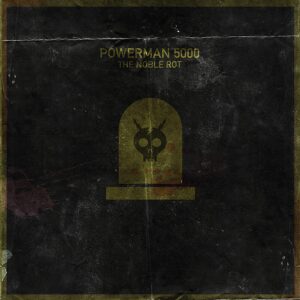 For anyone still unconvinced of PM5K’s abilities to fuse talent, riffs and good old b-movie style fun, their 2011 covers album ‘Copies, Clones & Replicants’ (heavily weighted towards Spider One’s beloved new wave influences) should be required listening. In fact, all of the band’s albums have their place; it’s only really 2014’s ‘Builders of The Future’ – a record weighted far too much towards repetition and one-line choruses – that presents the band on a genuine off day.

2020’s ‘The Noble Rot’ mixes the usual rock and new wave moods and although it is reliant on an over-familiar style in places, it’s actually great. ‘Brave New World’ instantly presents the band in their full-on mechanical new wave suit, with smart lyrics spat scattergun style against synth heavy, neo-industrial beats. Muted guitar chops flesh out the sound in a way that makes everything sound like Spider’s take on KMFDM as opposed to the groove heavy ‘Tonight The Stars Revolt’, but in terms of chorus songs that pull in at under three minutes, it’s as catchy as hell. Likewise, ‘Special Effects’ offers something close to an instant classic with its Devo-meets-Marilyn Manson sound. Perhaps more than most of the tracks on ‘The Noble Rot’, this wastes no time in showing of PM5K’s harder edges. The sharp mechanics of the verse and chorus quickly set the bones of a shout-along classic in place, while a brief instrumental interlude bolsters an industrial feel by adding guitar sounds like take on a buzzsaw edginess. Equally cool, ‘Strange People Doing Strange Things’ revisits the deep croon Spider used to brilliant effect on ‘Tonight The Stars Revolt’ and melds it to a rhythmically taut backdrop where programmed beats are augmented by echoing guitar lines and a very Gary Numan-esque interlude. It might be one of the most perfect examples of Powerman’s fusion of alternative sounds to date.

Released as a digital single, ‘Black Lipstick’ is classic post-’Transform’ Powerman, offering meaty beats and coldwave synth lines in a way that creates a brilliantly robotic new wave homage. With a dark and detached vocal joining a dense keyboard heavy sound, the retro mood is never hidden. Rather than sounding like a mere recycling of the past – or indeed being merely PM5K by numbers – the big hook has enough appeal to join any alternative playlist at the time of release. For those hoping for something a bit beefier, fuzzy guitar riffs and pulsing bass grooves provide the heart of ‘Cannibal Killers That Kill Everyone’. It’s a tune that comes closest to something from Rob Zombie’s ouvre, but the vocal chant still retains the kind of futuristic slant that underscores most of the best PM5K material, while the sub-Manson ‘Play God or Play Dead’s relentless marching beats provide the ideal backdrop for a few hard-edged riffs to rise up between the vocal sections. This has such a loving and retro heart, listeners will be instantly reminded of nights spent at alternative clubs back in the 90s. ‘Movie Blood’ also brings back sharp memories of the b-movie schtick of ‘Tonight The Stars Revolt’, and although it appears on the surface to be little more than PM5K on auto-pilot, that doesn’t make it any less fun. The riffs and hooks are brilliant; the love for sci-fi and horror supplies a comfort blanket like no other and Spider is clearly doing what he loves. Provided you don’t mind something that could have been on any number of previous Powerman albums, you’ll love it too. ‘Let The Insects Rule’ uses electronica in a much more ominous and interesting way, pulsing and wavering in a way that’s perfect as a soundtrack depicting human demise within a sci-fi dystopia. The slower tempo allows the riff to really punch through at all times; Spider takes the space to deliver his finest vocal this time around, somehow sounding dominant and world weary at the same time and his insistance that we should “let the insects rule / let them learn from the fools” doesn’t sound as far-fetched as you might think. With this album released at the height of summer 2020, the globe being terrorized by giant, flesh eating ants could’ve still been a possibility for a year that truly seemed to be set on self-destruct.

Closing the album are two numbers that delve further into synth pop sounds. A cover of the Go-Go’s classic ‘We Got The Beat’ is another reminder of the band’s obsession with the early 80s and although this cover strips away the original recording’s bounce, its sparser arrangement suits the vocal. By toning down the pop and stoking up the mechanics, it’s a throwback to the brilliant ‘Copies, Clones & Replicants’ and even though Spider chooses to reimagine the vocal in a far more detached way, the charms of a fantastic song are still clear. ‘VHS’ meanwhile, takes a synth loop and drum beat, adds a heavily treated vocal and casts PM5K in a mould that almost sounds like Kraftwerk aping something more sugary. In terms of song, its not got anywhere near as much depth as the band have previously proven capable, but its repetitious style and familiar feel will certainly help it to lodge in your long-term memory. By ensuring it’s the last thing you hear before the disc stops spinning – or Spotify fades into silence having now earnt the band a fraction of a cent – Spider One will be more than aware of this refrain’s infectious power…

It’s probably fair to say that if you’ve stuck with this band through thick and thin, ‘The Noble Rot’ won’t offer any massive surprises. However, if you’ve enjoyed the albums released after ‘Copies, Clones…’, with at least four instant PM5K classics, rest assured you’ll like this too. In fact, this is better than all of those. With ten sharp and hooky songs delivered in a vinyl friendly thirty minutes, there’s no chance of it outstaying its welcome either.