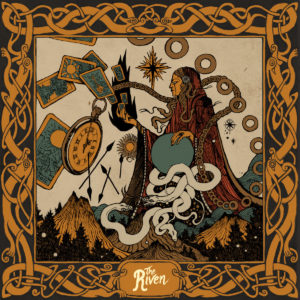 Despite only taking ten days to record, that album – 2019’s ‘The Riven’ – is an improvement upon ‘Blackbird’ in almost every way. It’s nine songs explore various styles and aspects of blues rock, always with Totta Ekebergh’s vocals out in front and mixed in a way that really reinforces her huge presence. Its old fashioned attitude also means it’s a record that clocks in at a vinyl friendly forty minutes and it’s all the better for that. There’s precious little room for anything that could be considered filler.

Tapping into some of the harder sounds that made an impression on the EP, ‘The Serpent’ starts everything off with a real intent, throwing out a hard edged and very retro guitar riff against a heavy, rumbling bass. Falling somewhere between late 60s proto metal and intensive bluesy rock, it’s everything the previous release hinted at…and more. In keeping with the tough musical stance, Ekeberg’s voice is absolutely terrific, crying and crooning at volume throughout, which is no mean feat considering the volume of Max Ternebring’s four strings. With more of a hefty swagger, ‘Leap of Faith’ at first suggests homage to Gun’s ‘Race With The Devil’, but quickly takes on its own identity as a whole world of rattling bass work underscores an impassioned vocal. Showing equal gifts for both hard rock chops and a bluesy cry, this is easily the best vocal on the album, while the music continues to impress with the arrival of a very 80s riff and a solid drum part. In and out in just over three minutes, it shows how The Riven understand that the lean approach to arrangements can work to their advantage, while ‘Edge of Time’ is a fine hard rocker that borrows a pinch of influence from late 70s Judas Priest in terms of riff and pacing during the verse (it really isn’t a million miles away from a couple of tunes on ‘Stained Class’) before settling into something that sounds like a blend of high-octane UFO and Thundermother. The interplay between drummer Olof Axegard and guitarist Arnau Diaz really captures the excitement of 80s hard rock, again truly demonstrating how much tighter The Riven have become since their EP release in 2017. While neither track is as bluesy as The Riven can be, both are played with speed and enthusiasm – and both are definitely album highlights.

Fans of Ekebergh’s voice will be in their element throughout ‘Fortune Teller’, a number that gives her a moment to shine on an unaccompanied intro, before dropping the rest of the band in for a great sounding slab of traditional hard rock. Knowing the voice will carry so much of this number, the guitars take a back seat for the verse, which obviously gives the chorus a pleasing punch when Diaz cranks everything. A mid section including some semi-funky bass, wordless vocals and a very rhythmic drum comes with a huge late 60s vibe before the second half of the track introduces chopping guitar work and a confident solo. With so many good ideas, it should’ve been able to stand alongside the record’s best cuts, but the final mix lets things down when a couple of drum fills sound particularly unpolished – almost like they’re still waiting for that huge overdub. Despite this, ‘Fortune Teller’ captures the spirit of The Riven’s core sound excellently. ‘Shadowman’, meanwhile, contrasts a soulful vocal against a choppy guitar, showcasing a slightly different approach, before Ekeberg’s manages to pull the strands together. It’s still shamelessly old fashioned – more 80s than 70s, this time – but it’s an enjoyable listen…and becomes especially so once Diaz offers a shamelessly old school guitar solo.

It’s out with the acoustics for ‘Far Beyond’ and it’s unsurprising when a definite love for Zeppelin comes through. With Totta’s softer side at play, the track starts brilliantly and slowly builds into a moody rocker that allows her to explore the full range of her voice. With the music taking on some classic 70s and 90s traits, The Riven explore a darker groove once things really get going, but the clarity of the vocal ensures everything stays very melodic. With a busy lead bass vying for attention beneath a bluesy lead guitar break and something a little heavier teasing with a brief moment of metal, musically, it’s another stand-out. Closing the album, ‘Sweet Child’ is a hard blues stomper which, again, suggests Tenebring’s fat bass is perhaps one of The Riven’s most essential ingredients as he chugs through some massive sounds across these six minutes. With Arnau toying with wah-wah and Totta easing into a soulful croon that leaves a lasting impression once the disc stops spinning, there’s no doubt that The Riven are a much better band than before.

It might not be flashy and it definitely panders to an older audience, but ‘The Riven’ is an absolutely superb record in most respects. Great riffs, strong vocals and big hooks come from all sides and for a band that’s still relatively new at the time of recording, The Riven sound completely at ease knowing they’ve nailed their sound. Fans of classic and retro hard rock should definitely give this a close listen.