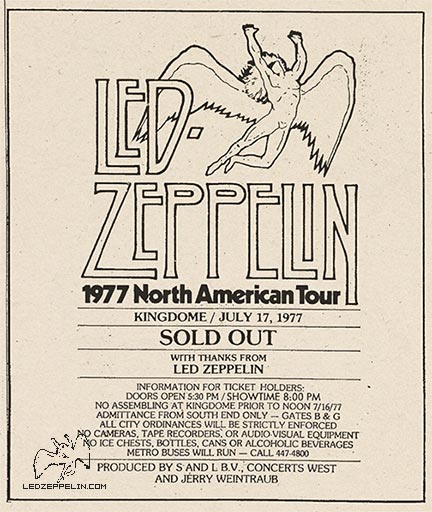 As always with any performances deemed sub-par by the band, some massive sweeping under the carpet occurred when compiling that DVD set, and Zep’s massive US tour of 1977 was completely ignored.  Granted, various personal problems meant the band weren’t in the best of shape, but it’s not as if the complete year was a write off.

Although not the band’s finest hour — or three — the below footage captured from a show in Seattle — gives UK fans a real eye-opener for a tour they would never see. Of particular note is one of the longest performances of ‘No Quarter’ during the band’s history and a ragged but spirited ‘Achilles Last Stand’, still by far the best of the then current material.

So, grab a beer, turn down the lights and turn up the volume for another dose of one of the best bands in history…