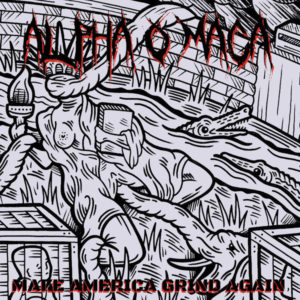 ‘Gringo’ features a collection of riffs that fuse the speed of hardcore and the anger of crust punk in a way that seems fairly traditional, but the way Alpha-O-Maga pre-faces them with a few old school punk riffs and a clanging ride cymbal certainly places them above run of the mill noise makers. Bringing in more of a hardcore riff and a retching vocal will be enough to turn off a good few listeners, but the way that then twists into an almost Mr. Bungle-like, art rock take on grindcore would certainly make Mike Patton proud. There’s an art to this extremity and that can be heard in an even better way throughout ‘Creep Show’ which takes a no-frills crust punk sound and shakes it up with a few weird discords and the kind of time signature shifts you’d expect from a progressive death metal act. Rather than just confront the listener with pure pneumatics or the kind of near industrious noise bursts of grindcore’s formative years, this actually highlights some great guitar playing along the way. With a concession to some great thrash metal and a doomier coda chucked in for good measure, you effectively get all of the band’s moods presented into a ninety second burst of sheer anger. Providing you can enjoy – or ignore – an especially divisive vocal performance, this will surely be this disc’s highlight.

Playing things more traditionally, ‘Deceiver Believer’ offers a blast of grindcore noise tempered by a descending scale and the almost epic ‘Only Heroes and Cowards Wear Masks’ presents a great slab of technical death metal abetted by a timeless grindcore grunt. Both of these numbers showcase a band whose arrangements sound so tightly wound, they’re almost at breaking point. In terms of extreme metal, the latter is a perfect piece of sheer musical terror. Slowing down a little for a track that takes crust punk to almost progressive levels, ‘Americ*nt’ is a highlight, at least in terms of riffs. Here, a hardcore groove gets pierced with a few off-kilter sounds while a purer grindcore vocal drives the anger in a very forceful way. For fans of bands like Extreme Noise Terror, this will give a more interesting slant on some already familiar blasts of anger.

For those looking for much straighter grindcore thrills, ‘Furniture Shopping’ will bring a huge reward as it is the most reminiscent of classic Napalm Death, but even here, a pointed guitar solo does its utmost to remind everyone of this band’s desire to mix things up. Also drawing most heavily from trad grind, the first half of ‘Death Panel’ should appeal. However, all isn’t quite as it first appears… In their by now typical style, Alpha-O-Maga turn everything on its head after forty seconds and launch into a perfect groove metal riff that’s much closer to the early Lamb of God than early Carcass of Terrorizer. Although still not destined for a mass audience, it’s one of those tracks that makes Alpha seem just a little bit more accessible somehow, which is important if this release is to have any real longevity.

Regardless of the music, if there’s anything that leaves an impression with this release, it’s the band’s extreme political stance. With America falling apart under the hand of a man who’d clearly like to have absolute rule, it’s understandable that Alpha are angry, but a quick run down of the track titles and subjects tells you all you need to know, whether you’ve been given a lyric sheet or not. With ten numbers wedged into less than fifteen minutes, it all goes past at speed, but along the way you’ll find the band rallying against lax gun laws (‘Guns Don’t Kill People, Teenagers With Guns Kill People’), looking at environmental issues (‘No ReGretas’), the rise in casual racism (‘You Don’t Look Like Me’) and a president who has a complete disregard for the American people (“You deserve what you get in ignorant bliss” is a particularly pointed line during ‘Deceiver Believer’). Best of all is ‘Furniture Shopping’, during which the band call out Trump on his tendencies to treat women like objects. With everything coming together in the catch-all blast of ‘Americ*nt’, this release has as much time for subtlety as it does for length.

This is scary. It’s also brilliant in it’s own way but, man, it’s beyond intense. You’ll be hard pressed to find a more tiring fifteen minutes. Of course, if you’re an extreme metal fan with a sense of adventure and a desire for a more progressive world view, you’ll certainly want to hear ‘Make America Grind Again’…and there’s no doubt you’ll be glad you did.