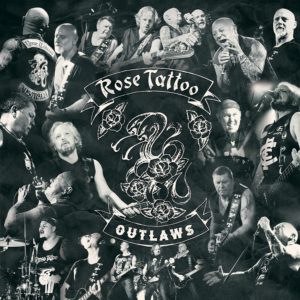 Forty two years on from the release of their debut album, Rose Tattoo chose to mark its importance by re-recording the whole record along with a few period bonus tracks. The cynics of the world might feel that ‘Outlaws’ is more about claiming royalties than celebrating the past – particularly since it’s only Anderson that provides a common link and its release didn’t coincide with a major anniversary – but if that were the case, some of the material would have been more obviously recycled. There are enough major differences to make it a decent record in its own right and the playing is strong enough to suggest this first studio outing for this line-up can more than hold its own.

The most obvious changes come from a decision to expand upon a couple of the original album’s signature pieces. ‘Rock ‘n’ Roll Outlaw’ is taken from a thin sounding three minute stomp to a full seven minute blues rock tour de force. The guitar riffs are fatter throughout; the ravages of time have made Anderson’s voice more attuned to a slightly bluesier arrangement and as the band powers through the moody riffs, you get the feeling they really mean business. Long serving slide player Dai Pritchard (Anderson’s right hand man since 2007) and guitarist Bob Spencer work well together throughout, showing off some really fierce interplay over an extended instrumental break, making the track their own, all the while remaining respectful to the work laid down by Mick Cocks and Peter Wells decades earlier. With the number now having more space to move, the rhythm section hit upon a great groove along the way and ex-AC/DC bassist Mark Evans and drummer Jackie (son of Jimmy) Barnes aren’t shy of dropping into a few Zeppelin-isms that really accentuate a tough sound. Likewise, the fast and sweaty ‘Bad Boys’ gets stretched to twice its original length. While some of the original number’s power surely came from its short and snappy approach, this gives the musicians a strong showcase, particularly Barnes as he shows off a really natural drum sound during a quieter interlude while Angry teases with snippets of a few old rock ‘n’ roll bangers. Anderson’s voice shows obvious signs of wear here – he doesn’t hit the screeches on the chorus as perfectly as he once did – but all things considered, the “live in the studio” sound of the recording has enough appeal to make it work.

Also great, ‘One of The Boys’ captures the pure essence of Rose Tattoo with its sharp boogie rock. Taking the original arrangement and playing it straight, the version included here still manages to sound like the heart and soul of good honest Aus bar-room rock, and is especially the case once Pritchard throws out a slide solo that’s all balls and no subtlety. If you’ve been a long time fan, you’ll have heard countless live takes of this one over the decades, so this studio recording – with the minimum of post-production sheen – will almost certainly provide a welcome alternative. The original album’s highlight ‘Remedy’ always sounded like Rose Tattoo playing AC/DC circa 1976 and in some ways, the presence of Evans on bass should make this even more the case. The basic riffs still stir up that easy comparison, but a louder slide guitar is on hand to remind you this could only be the legendary Tatts. Anderson lurches between each line with more of a slurring menace than ever before and overall, the speed and guts of the track is every match for the band’s early work. Somewhat reassuringly, as much as anything from this record, this take on ‘Remedy’ shows how – regardless of the passing time and regardless of line up – at the beginning of 2020, Rose Tattoo still sound like a musical force of nature.

With regard to the original album’s material, there’s one revisitation that doesn’t really live up to expectations. Musically, ‘Butcher & Fast Eddie’ clings firmly to its blues rock menace, but is played and mixed far more loudly. It’s one of the times when Anderson’s harsher tones become more obvious as his monologue replaces the familiar youthful sneer with something closer to a blues edged cry. It certainly takes some adjustment if you’ve lived with the original as long as most fans surely have. At the point it starts to feel a bit like a bad idea, Bob Spencer steps forth with some simple but effective soloing, stretching his blues chops as far as possible, effectively rescuing the track. While some of these re-recordings are great, even with some fine guitar playing this is one number that should, perhaps, have been left in the past.

Played pretty straight, ‘T.V.’ stokes up the speed and guts in a way that gives the whole band a sweaty work out. Even though they’re in the studio, Barnes and Pritchard play with the kind of intensity they would afford an audience, while ‘Tramp’ takes one of Rose Tattoo’s dirtiest riffs and pummels it hard which, again, more than suggests this 2020 line-up is capable of playing with both force and conviction. Neither track has been subjected to much revisionism – this is more about the opportunity to hear a band firing on all cylinders and its something which provides a hugely enjoyable experience. ‘Astra Wally’ is given the same no-frills approach, but by shortening the track by two minutes in comparison to the 1978 recording, it becomes more of a showcase for Anderson’s gravelly vocals than any obvious interplay within the band. It doesn’t quite generate the same excitement when shorn of its extended coda, but its hard to find fault with the overall performance.   Whereas ‘Butcher…’ showed a few flaws with the band slowing down, ‘Stuck On You’ fares a little better, particularly by showing off a few more subtle blues licks within Pritchard’s slide work. The way the slide compliments the vocal makes the track and although the vocal wobbles in a few places, this naturalism is far preferable to the many vocal filters that have adorned rock recordings over the previous decade. You can likely level many different adjectives at this set of Rose Tattoo re-recordings, but “fake” and “polished” certainly won’t apply. As evidenced on Paul Westerberg’s ‘Stereo’ album from 2002, sometimes something made with real love and heart is worth ten of something perfect. Sure, there are better tracks on ‘Outlaws’ than this, but there’s something about the tone of the performance that really appeals.

As for the extra material, all of the songs will be well known to fans either in demo or live form, but the opportunity to hear ‘Rosetta’, ‘Sweet Love’ and ‘Snow Queen’ recorded properly will definitely be welcomed by some of the band’s bigger fans. The definitive version of ‘Snow Queen’ can be found in the ‘Scarred For Live’ official bootleg box (recorded at a show in Sydney on January 1st 1980), but this recording reworks everything that was great about that – a good stomping rhythm really comes to life with the young Barnes behind the kit – and Anderson’s drawling voice really seems to capture the general sleaziness of the song’s subject matter. It’s lyrics are still…dubious, but as much as you can re-work stuff in the studio, it would be wrong for Rose Tattoo to drastically rewrite their own history. Less interesting is ‘Rosetta’ which, decades on, doesn’t manage to gather any more enthusiasm than a Keith Richards leftover. Its place here is important for completeness, but the 1980 demo (as heard on 2019’s ‘The Lost Album’) is far better. The music on this re-recorded version sounds fuller, but unfortunately, it’s one of a few times where the one-take vocal is just a little too carefree. It’s worth a listen out of curiosity, but it’s this disc’s obvious skipper. Fairly solid, ‘Sweet Love’ has even more of a heads down, boogie rock backbone than most Tatts material and this is something Bob Spencer really exploits with a heavy chug, while Anderson gives a performance with the kind of sneering underbelly that would make his younger self proud. Overall, it’s fine, but it’s never going to win your affections over the best of the original album tracks, whether in their 70s guises or the newer recordings.

On the surface, ‘Outlaws’ is the kind of record that might seem like a bad idea. Fear not, though, as although re-recording anything is almost always a tricky move, Angry and the 2020 line-up of the Tatts bring plenty of entertainment throughout. By taking every opportunity to make sure that this recording can be enjoyed as an alternative to the original rather than a straight-up replacement, ‘Outlaws’ is actually a welcome addition to the band’s back catalogue. It doesn’t all work out for the best, but when it does…there’s just about enough sweat here to match their ferocious best.